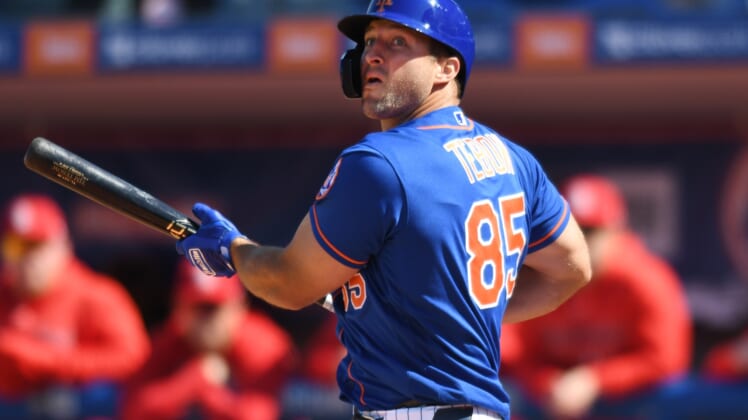 Tim Tebow might still have a chance of making his MLB debut this season with the New York Mets. If the upcoming 2020 MLB season wasn’t expected to be wacky enough, it sounds like the Mets could be open to making it even crazier with Tebow.

Tim Tebow came into the year coming off one of the worst seasons by a MiLB player in recent memory. Despite an ugly performance for Triple-A Syracuse in 2019, the 32-year-old received an invitation to participate in the Mets’ spring training.

Things didn’t go well for Tebow. After posting a .154 batting average across 13 at-bats this spring, along with some ugly blunders in the outfield, the Mets sent him to minor league camp before the COVID-19 pandemic shut everything down.

Now with baseball returning in July and no MiLB season expected, teams are being given 60-man player pools for this year. While Tebow wasn’t named as part of the first 50 players on the team’s roster, the door isn’t closed on him being given one of the final spots.

It’s an odd decision given Tebow’s entire value is generated from attracting fans to the games. While the Mets might be able to welcome some fans to Citi Field this season, no one will be able to watch Tebow play if he is a member of the taxi squad.

If the Mets are seriously considering giving Tebow a spot on their 60-man roster, this team will have big problems in 2020.