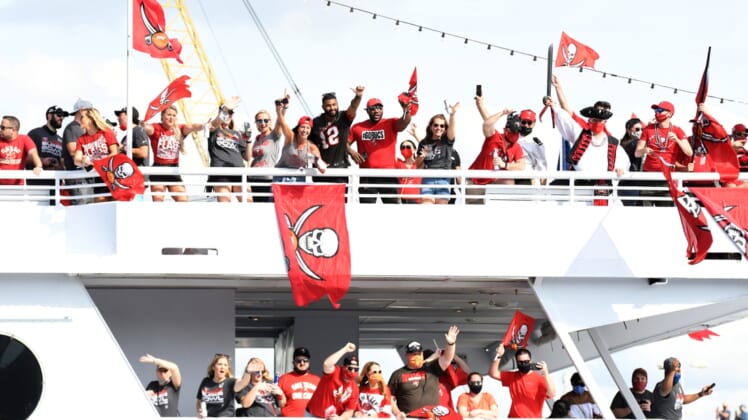 Pandemic or not, the Tampa Bay Buccaneers celebrated their Super Bowl LV championship in style on Wednesday.

With thousands of fans lining the Hillsborough River near downtown Tampa, Buccaneers coach Bruce Arians enjoyed the moment with a beer in one hand and a microphone in the other.

The band leader is, of course, quarterback Tom Brady, who followed up his Super Bowl MVP-winning performance in a 31-9 victory over the Kansas City Chiefs on Sunday by completing another pass three days later. Brady tossed the Lombardi Trophy from his boat to another, with tight end Cameron Brate making the catch.

Retirement doesn’t appear to be on the table for Arians and tight end Rob Gronkowski this time around. Gronkowski, in fact, celebrated on Wednesday with his shirt off and beads around his neck.

On the heels of his record fifth Super Bowl MVP award, the 43-year-old Brady appeared to be a bit tipsy after making it safely back to land. Third-string quarterback Ryan Griffin was seen helping him off the boat.

Tom Brady turns up in celebration of Super Bowl

Brady had a little fun on social media at his own expense.

The Buccaneers can afford to have a little fun after recording their second Super Bowl title in franchise history, even if they could not celebrate in unbridled fashion. Tampa Bay’s mayor Jane Castor had implored attendees on foot to respect social distancing guidelines and asked fans to don masks, rules which appeared to be followed by some, not all.

Of the many private boats and vessels also floating nearby, they were asked to remain at least 50 feet from all boats carrying players and members of the organization.