As the clock ticks down toward a Tuesday afternoon NFL deadline, the prospects of a blockbuster trade involving embattled Houston Texans quarterback Deshaun Watson have dwindled down to somewhere between an extremely unlikely scenario to zero chance of unfolding.

Here’s why a Watson trade is not expected to crystallize until the offseason at the soonest, according to multiple league sources not authorized to speak publicly.

Although the Texans, the Miami Dolphins, the team Watson has authorized waiving the no-trade clause in his $156 million contract for, and Watson are all highly motivated to make this happen, his complicated legal situation is just one of several obstacles standing in the way of a deal at this time. 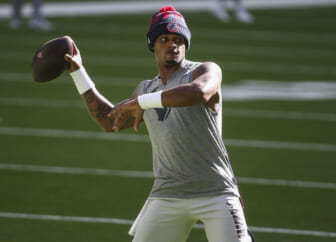 “This trade is not going to happen, right now,” a source said. “I would expect this all to be revisited before free agency in March and pick up speed toward the draft in April. There’s just too much going on to expect a trade to happen. Simply put, it’s a lot.”

Watson is facing 22 civil lawsuits alleging sexual assault and/or sexual misconduct along with 10 active criminal complaints, including eight complaints from litigants with two non-litigants, being investigated by the Houston Police Department with a grand jury in Harris County, Texas empaneled to hear the district attorney’s potential push for an indictment. While no charges have been filed by the HPD and no indictment is pending and there is no apparent audio, video or DNA evidence against the three-time Pro Bowl selection, there is still zero clarity for the Watson camp and his lawyer, Rusty Hardin, on whether he will ultimately face criminal charges.

That created a hesitancy for Dolphins owner Stephen Ross, according to sources, along with the obvious concern about the public relations fallout and potential damage to the brand by acquiring a player accused of serious allegations, albeit unproven ones.

Ross wants Watson to be unencumbered by the lawsuits or potential prosecution, according to sources. Watson does not intend to settle the cases at this time, so trade talks have reached an impasse.

Beyond the legal situation hanging over Watson, there’s also the heavy draft capital demands from the Texans, whom sources say want at least three first-round draft picks and two second-round selections or some talented players as part of a potential trade package. This is a possible franchise-altering opportunity for the rebuilding Texans, who are 1-6 and on a six-game losing streak heading into Sunday’s game against the Los Angeles Rams.

Texans general manager Nick Caserio doesn’t want to squander the opportunity to capitalize on the opportunity to acquire valuable draft picks he can use to overhaul the roster and add some good football players to move on from the Watson mess he inherited when he left the New England Patriots to take over the AFC South franchise’s personnel department.

Meanwhile, NFL commissioner Roger Goodell disclosed Tuesday at the league meetings that the league doesn’t have the required information or clarity to determine whether Watson should be placed on the commissioner-exempt list, the equivalent of paid leave.

That means that Watson would be eligible to play immediately should he be traded by the NFL trade deadline next Tuesday afternoon.

Watson has not been charged with a crime and has denied wrongdoing through Hardin. At one point, the FBI investigated, including whether Watson was the victim of an extortion attempt and whether interstate human trafficking laws had been potentially violated. A grand jury has been empaneled to investigate the matter.

Under its collective bargaining agreement’s personal conduct policy, the NFL is not expected to punish Watson until his legal situation has been adjudicated.

“But I think that process is still ongoing. Until that process is ongoing and we have enough data and enough information to be able to make a determination of whether he should go on commissioner exempt, we don’t feel that we have that necessary information at this point.”

None of the legal situations, including whether Watson will be indicted by a grand jury or charged directly by the HPD, is expected to be resolved by the trade deadline and the Harris County District Attorney’s Office is not obviously going to rush any decision based on football matters.

No trade is imminent or likely at this time, according to sources.

The Dolphins have been Watson’s preferred destination throughout this process since he first requested a trade in January due to the former Clemson star feeling disenchanted with the organization and chairman and CEO Cal McNair because of a lack of involvement and communication in the hiring process of Caserio and coach David Culley on the heels of him first being angered by the controversial trade of All-Pro wide receiver DeAndre Hopkins in March of 2020, according to league sources not authorized to speak publicly.

The Carolina Panthers briefly emerged as a player in the Watson situation and the quarterback respects the NFC South franchise and was somewhat open to potentially considering them as a destination should a trade have been agreed to according to sources.

However, Watson has been adamant throughout the process that the Dolphins are where he wants to go. Watson would not waive his no-trade clause for the Philadelphia Eagles, who were extremely interested in him and sent an investigator to Houston previously to investigate Watson’s legal situation, according to sources.

Watson is “intentional” in his desire to never play another down for the Texans, per sources. Watson reported to training camp to avoid accruing $50,000 daily fines. He reports to work every day to work out, but has not practiced since training camp and he no longer attends meetings, per sources. He has been inactive every week for non-injury reasons-personal matter.

In an August news conference, Hardin stated about the FBI brief involvement in the case, which originated with plaintiffs’ attorney Tony Buzbee: “In April, the FBI came to us and told us they were investigating a matter as to whether one of Mr. Buzbee’s clients had committed extortion in the way they were demanding money from Deshaun or what they would do if they didn’t pay it,” Hardin said.

One potentially bad scenario for Watson and any team that trades for him to consider: Watson possibly being charged with a crime and then being placed on the commissioner-exempt list and not going to trial until late next year and then being unavailable in 2021 and 2022 and, depending on how a possible case is adjudicated, potentially being punished for an undetermined portion of the 2023 season.

Watson is due a $35 million guaranteed base salary in 2022 and is being paid a $10.54 million base salary by the Texans this year.

Another wrinkle in the trade talks is the potential involvement of another franchise and another possible trade, not involving Watson, according to league sources.

Recently, McNair was noncommittal on the prospects of potentially trading Watson, who led the NFL in passing yards last season and is one of the most dynamic players in the NFL regardless of position.

“We’ll just wait and see,” McNair said during the Texans’ second annual Founder’s Day at the American Cancer Society Hope Lodge in Houston. “It’s a day-to-day thing. Nick is in charge of that, so we’ll see how that works out.”

When asked to rate the odds of Watson being traded by a Nov. 2 league deadline, McNair smiled and replied: “I have no idea.”

The Watson issue was inherited by Caserio and Culley.

“I think they’ve been put in a very tough spot, a spot that is not of their choosing and they’ve made the very best of it and sort of worked through it day to day,” McNair said. “So, we’ll see where it goes.”

The NFL issued a statement prior to training camp.

“The NFL’s review of the serious allegations against Deshaun Watson remains ongoing and active,” the league said in an email. “We are working cooperatively with the Houston Police Department and ensuring that the NFL’s inquiry does not interfere with their investigation. As we continue to gather additional information and monitor law enforcement developments, we will make appropriate decisions consistent with the Collective Bargaining Agreement and the Personal Conduct Policy. At this time, there are no restrictions on Watson’s participation in club activities.”

Hardin, said during an August press conference that Watson has yet to speak to NFL investigators.

That time, though, isn’t now. And the timing for a trade feels off to many close to the situation.

Wilson has covered the NFL for 20 seasons, including the Texans, Baltimore Ravens, Tennessee Titans and Jacksonville Jaguars. He has previously written for The Houston Chronicle and The Baltimore Sun. He’s on Twitter: @AaronWilson_NFL and Instagram: @aaronwilson7128.