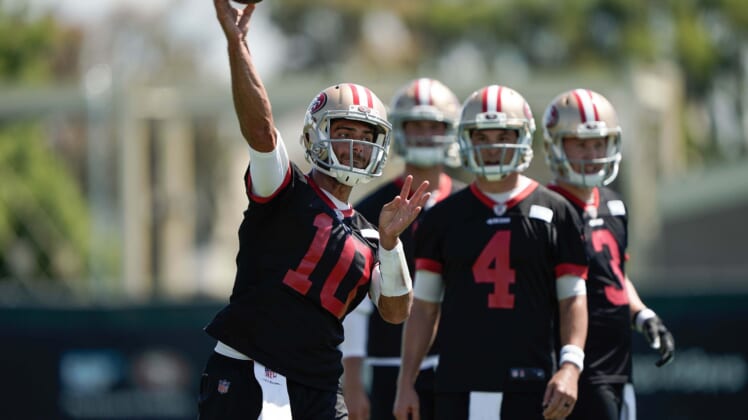 The widespread injuries that the defending NFC champion San Francisco 49ers have dealt with over the first three weeks of the 2020 NFL season has not necessarily impacted the team.

Kyle Shanahan’s squad is coming off consecutive wins over two bad New York-based squads in that of the Jets and Giants, outscoring the pair by a combined margin of 45 points.

The backstory here is what we saw from backup quarterback Nick Mullens back in Week 3 as he replaced the injured Jimmy Garoppolo (high-ankle sprain) under center against the Giants. Seeing his first extended action since replacing Garoppolo (torn ACL) back in 2018, Mullens completed 25-of-36 passes for 343 yards with one touchdown and zero interceptions in the 36-9 win.

It’s not yet known whether Garoppolo will be able to return for “Sunday Night Football” Week 4 against the Philadelphia Eagles. What we do know is that he’s not on the verge of losing the starting job.

Prior to suffering the above-mentioned ankle injury in Week 2, Garoppolo was coming off two consecutive terrible performances dating back to Super Bowl LIV. He threw two interceptions against the Chiefs, helping Patrick Mahomes and Co. recover from a 10-point fourth-quarter deficit.

Back in Week 1, a loss to the Arizona Cardinals, Garoppolo missed multiple open receivers and connected with wide receivers on just 4-of-11 passes. Despite this, Garoppolo heads into Week 4 having completed 67.3% of his passes with four touchdowns and zero interceptions for a 118.6 quarterback rating.

Since joining San Francisco back in 2018, Garoppolo has led the team to a 20-6 record in 26 starts. That span has seen him throw 43 touchdowns compared to 21 interceptions while averaging nearly 250 passing yards per game. During the 49ers’ run to the NFC title last season, Garoppolo put up one of the best statistical performances for a quarterback in franchise history.

Despite this, struggles in big games coupled with Garoppolo’s injury history has led to some speculation that San Francisco might look to move on from him following the 2020 NFL season. It makes sense in that Garoppolo’s ability to win games does not seem to compute with him lifting up the overall performance of the team. Quarterback wins are meaningless and the like. At least, that’s the narrative being thrown around.

Related: NFL stars who could be traded

Could Nick Mullens be traded?

Given San Francisco’s injury issues this season, it’s probably a good thing that the team pushed back against trading Mullens during the spring. A number of teams had thrown offers in the 49ers’ direction, according to multiple sources.

In nine career starts, Mullens is completing 65% of his passes for 2,691 yards with 14 touchdowns and 11 interceptions. He’s the first 49ers quarterback to throw for 220-plus yards in nine consecutive starts since Joe Montana back in 1985. Sunday’s win against the Giants also represented the first time San Francisco has gone without a punt in a game since 1993.

The common theme? If the 49ers were to place Mullens on the trade block, multiple teams would come calling. At issue here is the presence of C.J. Beathard as San Francisco’s No. 3 quarterback. He’s simply terrible.

With that said, it’s something to keep an eye on heading into the Nov. 3 trade deadline.