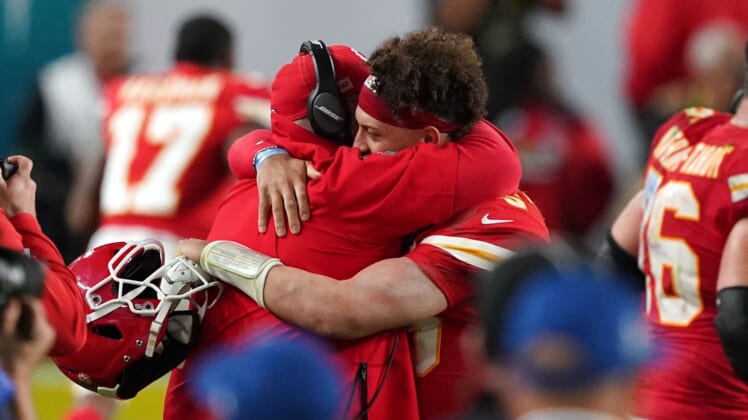 The San Francisco 49ers and Kansas City Chiefs did battle in Super Bowl LIV on Sunday night. Kansas City opened up a 10-3 lead thanks in large part due to this horrific interception from Jimmy Garoppolo.

Mahomes came up big when it counted. Garoppolo didn’t. The end result was 31-20 win for the Chiefs and their first Super Bowl title in over a half century.

Mahomes opened the second half of Sunday’s Super Bowl by throwing two ugly interceptions. It was somewhat of a shock to see given that he had never thrown a pick in his young playoff career. Mahomes looked lost in the backfield and was seeing ghosts out there.

Mahomes would ultimately lead the Chiefs to three consecutive touchdown drives, two of which culminated in touchdown passes to Travis Kelce and Damien Williams. Mahomes finished the evening with 315 total yards and three touchdowns in yet another awe-inspiring comeback en route to earning the game’s MVP award.

We knew that the Chiefs were going to force Garoppolo to beat their defense through the air after seeing the 49ers’ rushing attack dominate in the NFC Playoffs. Garoppolo was not up to the task. He threw an ugly first-half interception on a pass that was tossed with his eyes closed.

While Garoppolo got hot in the second and third quarter, he struggled with the game on the line. San Francisco was down 24-20 with just over two minutes left. It had to go 85 yards to win the game. Garoppolo’s offense ultimately turned the ball over on downs. That included the quarterback missing a wide open Emmanuel Sanders for what would have likely been the game-winning touchdown.

We’re not going to solely blame Garoppolo for the loss. He was part of the reason San Francisco came up short. But as the quarterback, he’ll get most of the blame.

The most wins in NFL history without a Super Bowl title. His 15th playoff appearances as a head coach. Most of the nation was rooting for Reid to finally get that monkey off his back. That’s exactly what the 61-year-old head coach did Sunday night in Miami.

The scene of Reid hoisting the Lombardi Trophy after the game had to give the objective NFL fan chills. He’s put in the sweat and the work. And now, for the first time in Reid’s Hall of Fame worthy career, he’s a Super Bowl champ.

A lot was made of Kittle catching just four passes in the two NFC Playoff games heading into Super Bowl LIV. A lot of that had to do with the 49ers’ dominating rushing attack in those two games. With Garoppolo forced to pass the ball more against the Chiefs, we expected Kittle to come through big time.

Including this questionable offensive pass interference call late in the second quarter, Kittle did not step up when the 49ers needed him the most. He caught just four passes for 36 yards on seven targets. That’s not what we’d call an All-Pro performance from a player who might soon sign a record-breaking extension.

Kansas City’s running game was non-existent during the team’s run to the Super Bowl. In fact, Mahomes led the team in rushing over that span. Williams had other ideas against one of the game’s best defenses Sunday night.

The former undrafted free agent from Oklahoma put a stamp on this game with a 38-yard touchdown in the fourth quarter.

He also added 29 yards on four catches, including yet another touchdown. When all was said and done, the unheralded Williams put up 133 yards and two touchdowns on 21 touches. Job well done against an elite defense.

One of the greatest turnarounds in NFL history

A lot will be made of San Francisco being outscored 21-0 in the final six-plus minutes of the game. That was a meltdown of epic proportions. It also showed us that the Super Bowl LIV stage might have been too big or the 49ers.

While that was indeed the case, we still have to give the 49ers for their turnaround from a four-win 2018 season. Two win 13 games and find yourself on the game’s grandest of stages. It was a heck of a performance from Kyle Shanahan’s squad. That can’t be lost, even after Sunday night’s humiliating ending.

The start of a dynasty?

No one wanted to compare Mahomes to Tom Brady or Joe Montana head into Super Bowl LIV. Win the big game at least once, and then be mentioned among the best we’ve ever seen play. Mahomes did that against San Francisco, leading a comeback in the same stadium that Montana made history with the 49ers.

At 24 years old, Mahomes is not even in the prime of his career. He’s now the young player to ever win both the regular season MVP and Super Bowl MVP. Travis Kelce and Tyrann Mathieu are just now entering their primes. Stud receiver Tyreek Hill is just 25 years old. With everything up in the air as it relates to the New England Patriots, we could now be looking at the NFL’s next great dynasty.