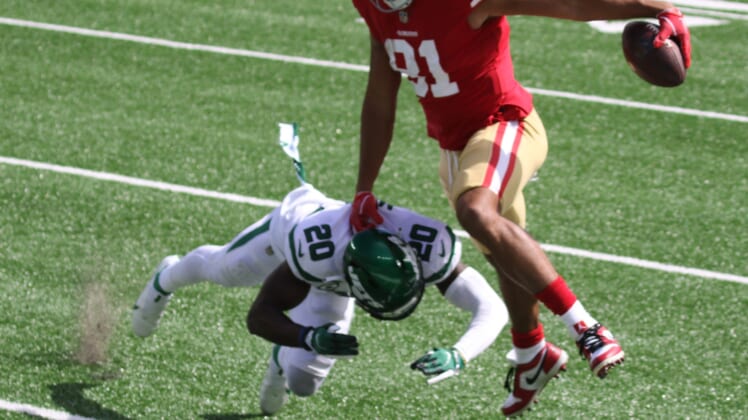 Update: The 49ers announce that they have placed Jordan Reed on injured reserve with an MCL sprain to the knee. Head coach Kyle Shanahan says he’ll be out 6-8 weeks.

It was among the biggest stories around the NFL heading into Week 3. Multiple star San Francisco 49ers players going down with lower-body injuries during the team’s blowout win over the New York Jets last Sunday.

Among then, star defensive end Nick Bosa was lost for the season to a torn ACL while quarterback Jimmy Garoppolo suffered a high-ankle sprain.

Despite the perceived issues with the turf at MetLife Stadium in New Jersey, the NFL approved the venue to host San Francisco’s game against the New York Giants on Sunday. It did not go swimmingly for Jordan Reed

As you can see, the turf popped up and caught Reed’s left ankle. That’s not how it’s supposed to happen. And in reality, it’s clear that said turf impacted the Reed injury.

A former Pro Bowler with the Washington Football Team, Reed signed a one-year contract with San Francisco this past offseason after missing the entire 2019 campaign due to concussions. He scored two touchdowns in last week’s win over the Jets, replacing injured All-Pro tight end George Kittle in San Francisco’s lineup.