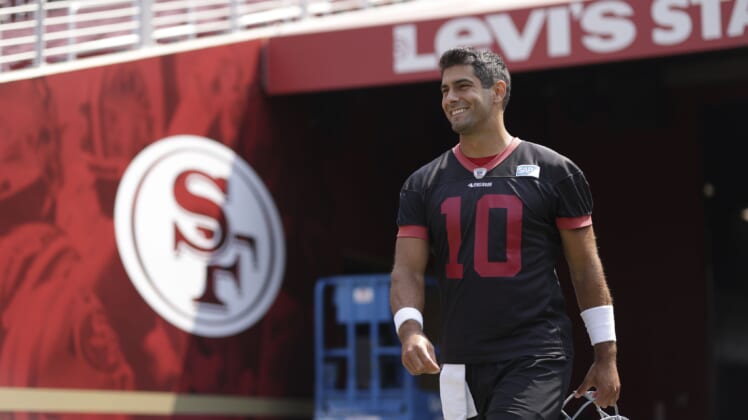 A source close to NFL Media’s Ian Rapoport now describes Garoppolo’s injury as day-to-day. The quarterback is still highly unlikely to go Week 3 against the Giants. However, this does not look like a multi-week injury.

49ers head coach Kyle Shanahan noted after Sunday’s win against the Jets that Garoppolo suffered a high-ankle sprain. It’s typically a multi-week injury. Nick Mullens will get the start Week 3 against the Giants.

The San Francisco 49ers just can’t catch a break during the early portion of the 2020 NFL season. Earlier on Sunday against the New York Jets, star defensive end Nick Bosa exited the game with what seems to be a serious knee injury.

This is just a continuation of injury issues that have plagued the defending NFC champions through less than two games. It has now been taken to a whole new level.

Jimmy Garoppolo ruled out for Week 2 with ankle injury

Garoppolo suffered the injury early in the first half, only to complete 14-of-16 passes with two touchdowns en route to helping San Francisco to a 21-3 halftime lead. However, he did not return with the rest of the team to start the third quarter.

Remember, Garoppolo missed all but three games during the 2018 season with a torn ACL. He also struggled big time in Week 1’s loss to the Arizona Cardinals before picking it up in the first half on Sunday.

As noted in the above-mentioned report, star running back Raheem Mostert also suffered a knee injury in the game and was ruled out. This comes after he put up a brilliant performance in Week 1 and opened Sunday’s action with an 80-yard touchdown run.

Again, this is a continuation of some major injury issues for San Francisco.

It goes without saying that the injury bug has bitten San Francisco big time through the first two weeks of the 2020 season. With Garoppolo sidelined, Nick Mullens took over under center for the 49ers. He proceeded to throw an interception on his fifth pass of the game.

We will obviously have further updates on 49ers-related injuries in the coming days. For now, it’s been brutal for head coach Kyle Shanahan and Co.