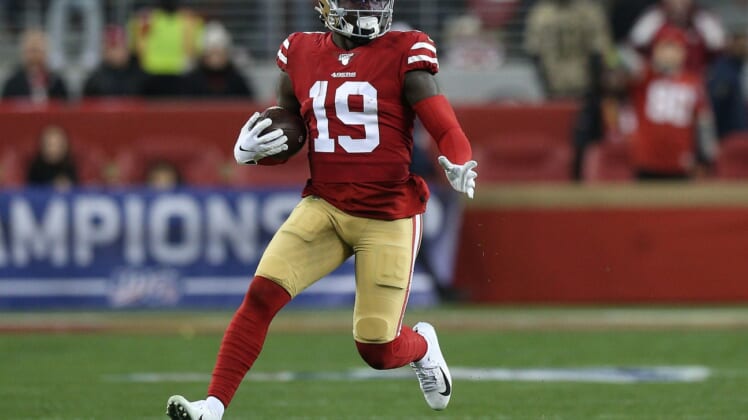 The San Francisco 49ers head into their Week 1 matchup against the division-rival Arizona Cardinals as overwhelming favorites to come out on top.

Unfortunately for the defending NFC champions, they will not have one of their top offensive weapons on the field for the game at Levi’s Stadium.

49ers rule Deebo Samuel out for Week 1 vs. Cardinals

The second-year receiver out of South Carolina suffered a Jones fracture in his foot during a workout with teammates this past summer.

The electric pass catcher was originally slated to miss the first few weeks of the season. Though, San Francisco had Samuel on its active 53-man roster after cut downs last weekend. That seemed to suggest that he might be able to go. Obviously, this isn’t the case.

Including San Francisco’s run to the Super Bowl in 2019, Samuel tallied nearly 1,300 total yards from scrimmage. He also averaged a robust 14.1 yards per catch. The 49ers are relying on this former second-round pick to be their No. 1 receiver in 2020.

With Samuel out and rookie first-round pick Brandon Aiyuk (hamstring) questionable, it is going to be the next-man up philosophy for head coach Kyle Shanahan.

Expect youngster Kendrick Bourne to take over the top receiver duties against a mediocre Cardinals pass defense. Bourne caught 68.2% of his targets as a third-year player in 2019. He could be primed for a breakout performance this season.

Though, it’s going to be all about the recently-extended George Kittle from a fantasy perspective. The All-Pro tight end has a plus-level matchup against a Cardinals defense that yielded the third-most receptions and most yards to tight ends a season ago. He’s going to eat.