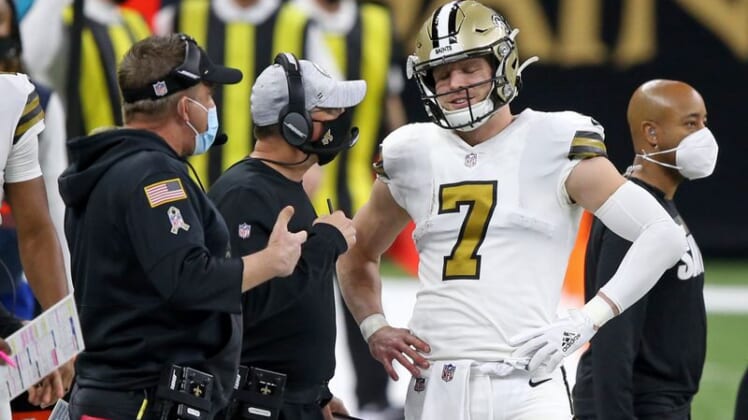 The New Orleans Saints will likely have a quarterback competition in 2021 after Drew Brees opted to retire. That will include Taysom Hill. It could also potentially include impending free agent Jameis Winston.

Immediately after Brees’ expected retirement became official, the Saints started to take care of business at the all-important quarterback position. Below, are the details.

According to ESPN’s Adam Schefter, Hill signed a new four-year, $140 million contract extension. Before NFL fans the world over start to freak out, there’s an important caveat to all of this.

The final three years of Hill’s new contract are voidable. The restructure saves a cash-strapped Saints team $7.5 million against the 2021 NFL salary cap. It pretty much breaks down to a one-year, $12.2 million contract for the talented signal caller.

Hill, 30, has been a favorite of Saints head coach Sean Payton since the former undrafted free agent joined the team back in 2017. Payton has long considered him a potential heir-apparent to Brees.

Last season alone, Taysom Hill put up 457 rushing yards and eight touchdowns on the ground. He added 928 passing yards with four scores and two interceptions through the air. Despite being greenish, Hill is seen as a dual-threat quarterback and is likely to be the favorite to land the Saints’ starting job in 2021.

According to NFL Media’s Tom Pelissero, New Orleans is looking to re-sign Winston before the start of the free-agent tampering period on Monday.

The insider notes that any deal to retain Winston would be similar to the contract Cam Newton got from the New England Patriots late last week. That would include a one-year, $5 million contract with incentives that could push the deal up to $14 million.

A former No. 1 pick of the Tampa Bay Buccaneers, Winston signed a one-year deal with the Saints last offseason to learn from Brees and Payton. He didn’t get much of a shot to prove himself on the field. Even with Brees missing four games to injury, Winston threw a grand total of 11 regular-season passes.

Locking up Winston on a deal similar to what Newton received would be somewhat of a boon for the cash-strapped Saints. It would mean a combined $17-plus million cap hit for their top-two quarterbacks. Given the salary cap gymnastics general manager Mickey Loomis has had to do over the past couple weeks, that’s no small thing.

The idea, at least for now, would be to see Taysom Hill and Jameis Winston compete for the starting quarterback job during training camp. Obviously, that would change if New Orleans can pull off a blockbuster trade for a more-notable quarterback in Russell Wilson.

However, the Hill extension coupled with New Orleans’ interest in re-signing Winston likely ends any talk of Wilson ending up in the Bayou. Initially, they were one of four teams Wilson’s agent told the Seahawks he would accept a trade to. One of the other teams, the Dallas Cowboys, are also out on Wilson after re-signing Dak Prescott.

Click below for more New Orleans Saints news and rumors.