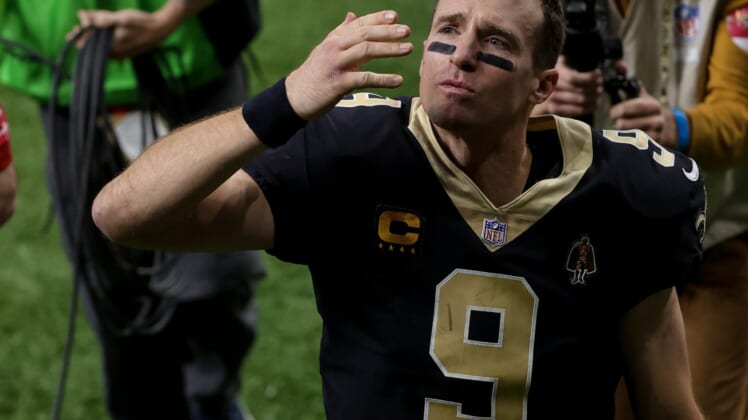 Jan 17, 2021; New Orleans, Louisiana, USA; New Orleans Saints quarterback Drew Brees (9) blows a kiss to his family as he walks to the tunnel following a 30-20 loss against the Tampa Bay Buccaneers in a NFC Divisional Round playoff game at the Mercedes-Benz Superdome. Mandatory Credit: Derick E. Hingle-USA TODAY Sports

One of the greatest of all-time. An absolute legend. A first ballot Hall of Famer. Quarterback Drew Brees will go down in history as one of the top-10 signal callers to ever take to the NFL gridiron.

Now, after 20 amazing seasons and 15 with the New Orleans Saints, Brees has called it quits.

“After 20 years as a player in the NFL and 15 years as a Saint, it is time I retire from the game of football. Each day, I poured my heart & soul into being your Quarterback. Til the very end, I exhausted myself to give everything I had to the Saints organization, my team, and the great city of New Orleans,” Brees said, via his official Instagram account. “We shared some amazing moments together, many of which are emblazoned in our hearts and minds and will forever be a part of us. You have molded me, strengthened me, inspired me, and given me a lifetime of memories. My goal for the last 15 years was striving to give to you everything you had given to me and more.”

Drew Brees then talked about his post-football life and how he will still remain a member of the New Orleans community.

“I am only retiring from playing football, I am not retiring from New Orleans. This is not goodbye, rather a new beginning. Now my real life‘s work begins.”

Indeed. This retirement announcement comes on the 15th year anniversary of Brees signing a free-agent contract with the Saints. It’s notable for many reasons.

However, Brees’ decision to sign with New Orleans in the first place came in the aftermath of Hurricane Katrina and the destruction it caused in the Bayou. It was one of the primary reasons the former Purdue standout opted to sign with the Saints. He wanted to help rebuild the ravaged community.

15 years later, and Drew Brees is a poignant reminder of the tough times within that community and how the city banded together to rebuild it all.

On the field, the future Hall of Famer ends his career with the most passing yards (80,358) and second-most passing touchdowns (571) in NFL history. He threw for north of 5,000 yards five times and tallied north of 30 touchdown passes 10 times. To put this into perspective, Joe Montana threw more than 30 touchdown passes one time. He’s right up there with Tom Brady as the greatest of all-time.

A Super Bowl-winning quarterback. An absolute legend in every way. Drew Brees decision to retire after 20 seasons is the end of an era around the league.