This game is the reason I wanted to write this entire series. So many generalizations flow from this game that I need to see which ones are true: Such as the Minnesota Vikings need a dominant offensive line (like the Cleveland Browns), Kirk Cousins takes too many check downs, the defense folds, the offense is uncreative, etc.

Almost any argument for the Vikings being good in 2022 can have a, “Yeah, but what about that Browns game?”. That is why I think this game will be so illuminating when I think about what can change in 2022. Here are prior weeks’ reviews; the point of all of this is to set expectations for 2022.

Interesting stat: The combined number of scoring drives in this game: four (one Vikings’ touchdown, one Browns’ touchdown, and two Browns’ field goals). The Bears game in Chicago (which was also a mess) had five scoring drives; every other game the Vikings played had at least eight scoring drives.

I picked this stat because it highlights the flow of the game – it was obvious that both defenses were going to make life difficult for opposing offenses. Even the long scoring drives for both teams were closely contested, and the offenses had to make a series of difficult plays to score.

Key play: I’m going to highlight two plays: one by the offense and one by the defense that was very close to swinging the game the other way.

Vikings on defense – Browns’ 3rd and 20 from their own 26 with 0:35 in the half and no time outs. The only thing the Browns can reasonably be expected to do is kill the clock and avoid giving the Vikings an opportunity. The Browns’ play call was exactly what was expected in that situation, a draw-play to get some yards and pin the Vikings deep. Then this:

There is no good reason for this to be a 33-yard gain for Kareem Hunt. The Vikings have six defenders versus three blockers that should be in a position to make a tackle. I could blame specific guys here: Mackensie Alexander did nothing but jog down the field, Xavier Woods didn’t get to Hunt until about the 50, and Eric Kendricks was held (sort of).

But this seems like a microcosm of the end of the Mike Zimmer era: Technically things should work, but in practice they just didn’t. It was like the Vikings knew what should happen and took their foot off the gas – with both play and play-calling. A lot of the guys at fault on this play (Nick Vigil, Woods, Alexander) have been replaced. But the bigger question is: Will Kevin O’Connell have guys better prepared to make a play?

Vikings on offense – 3rd and 12 and a 37-yard completion to Justin Jefferson is wiped out by a holding call on Tyler Conklin (left side of image).

Interestingly, there were a few really great things on this play: Alexander Mattison does yeoman’s work picking up the blitzing Owusu-Koramoah, we have an Oli Udoh sighting as he stonewalls Jadeveon Clowney, and the throw was into lighter coverage in the area Owusu-Koramoah would have vacated with his blitz.

Given how much worked, and the situation (3rd and 12), I have one question about this play design: WHY IN THE NAME OF ANYTHING SANE DO YOU ASK TYLER CONKLIN TO BLOCK MYLES GARRETT ONE-ON-ONE? It’s bad that Rashod Hill got fooled, but I can’t be too mad about that – the blitz was designed to fool him. But even if he wasn’t fooled, he was asked to block one of Owusu-Koramoah or McKinley … not to help the second-string tight end block the Browns’ All-Pro pass rusher. This wasn’t smart.

Now, let’s go back to the interesting stat. At this point, the Vikings knew that this was a grind-out game with relatively few opportunities to be had. When they had a shot, they just left Conklin on his own and hoped nothing bad happened. Well, guess what? You always get burned in that kind of horrible Hill hole!

Passing offense: This is a passing offense score, not a Kirk Cousins score. Between pass-blocking, receiving, play-calling and quarterback play, the passing game wasn’t prepared. However, of those groups, I would rank them from worst to best: play-calling, pass-blocking, quarterback play, and, finally, receivers. Play-calling and scheme were so bad I almost called this a -1 in order to dump that on the coaching staff later, but the rest made bad enough plays, as well.
Game score: -2 (cumulative season to date: +2)

Rushing offense: Not as bad as I expected. The yards-per-carry was low, but there were some good plays made by Dalvin Cook and Mattison. The good plays weren’t enough to really impact the game, but it was enough to force the Browns to keep playing the run.
Game score: -1 (cumulative season to date: +0)

Pass defense: Solid game, once again led by the pass rush. There is a lesson in this game for the secondary: just stay close to a guy and you’ll make deep passes hard. Four games in, and the pass defense is carrying the team. It’s interesting to know that this will fall off such a cliff later in the season.
Game score: +2 (cumulative season to date: +4)

Run defense: Also, not as bad as I remember. Outside of that key play, there weren’t a lot of plays where the run defense got gashed. There was a lot of Nick Chubb making fantastic individual efforts in traffic, but overall, much better than the yards-per-carry suggests. I can’t really rate this group any lower when the defense only allowed 14 points, forced more three-and-outs (4) than scoring drives (3), and they held firm on the last Browns’ series to give the offense a puncher’s chance.
Game score: +1 (cumulative season to date: +0)

Special teams: They did nothing. They didn’t ruin the game, but also didn’t make any plays either. One of the dumbest plays of the game was the fourth timeout called by the Vikings while the Browns were kicking an extra point, resulting in a penalty and a two-point conversion, but that’s more preparation than play. This would be a “0” rating if I allowed them, but you have to make a play to get a positive number.
Coaching: The play-calling for the passing game was atrocious, but when I look at preparation, clock management, aggression, and both sides of the ball, it was not their most egregiously bad game. The problem in this game is that the offensive staff never seemed to understand what was going on in the game (that every first down would be a battle). Instead of trying to set their guys up to succeed, they tried to outsmart the Browns’ “punch ’em in the face” style. More on these mistakes below. The defense came mostly well-prepared. This wasn’t good, but it also wasn’t as bad as the Bengals or Cardinals losses.
Game score: -1 (cumulative season to date: -3)

Related: Evaluating the importance of a great quarterback and how it relates to Kirk Cousins

Here is a view of the first two plays coming out of halftime. First:

This is not the only time they called this stupid screen play in the game, and I’ve seen something like this come up in every game so far. In sum: have a receiver run absolutely no route, just stand there and wait for the ball, and then try to make something happen on your own. I don’t like it!

This is not a situation where Cousins sees a defensive back playing off and tries to sneak a few yards for free. It’s also not a check down. It’s a designed play; you can see Adam Thielen out in front of Jefferson setting up a block. The problem is this has no chance – Thielen can’t block both defenders running at Jefferson. It makes me wonder, if everything works exactly as intended, what is supposed to happen?

The final, and maybe largest, issue with this “just-stand-there” route is that it is not what Jefferson is good at. He’s not the fastest receiver in the league nor will he make defenders tackle air. His best asset is his feet, hips and hands to get open downfield – where he is uncoverable. This is the Vikings’ coaching staff not understanding their players. This play highlights why I think Kevin O’Connell could have a significantly positive impact on the offense.

Now, the second play of that opening drive:

The blue line on that image is the line of scrimmage. Cook is seven yards behind it, facing the wrong way and already in traffic when he gets the ball. How many yards would you reasonably expect Cook to lose or gain in this situation? (answer in a moment) And again, not a check-down or bail out on a deep throw, this is Cousins throwing the ball where the play intended it to go.

These short passes were absolutely not working in this game. The Browns were playing tight and pressing everything. The team’s probability of success was low and required players to make great moves to make a positive play; there were many others in the game like them. The things that were sometimes working were deep drops on play action and quick passes. Cousins was under pressure but generally getting the ball out quickly. These play-calls, and others like them, eschewed attempts to beat the Browns in favor of attempts to trick the Browns’ defense.

The reason the coaching staff gets a negative rating is because they relied on individuals to make the plays, rather than setting the player up to make the play easily and have the individual effort be icing on the cake. It didn’t work, but the coaching rating isn’t worse because, in theory, these were called with the intent of countering the Browns’ pass rush. And speaking of great individual efforts, Cook took that pass from -7 yards and turned it into a gain of six. Anyone who says Cook isn’t worth his contract can go watch this play on a loop.

I also looked for examples of Cousins coming off a deep receiver in favor of a shorter one. I didn’t think that was a major issue in this game. While I found a few of them, usually it was a medium versus a short route; much more often it was Cousins going short because of pressure. Here was the worst one I found:

This was right at the two-minute warning. It looks like Osborn is clearing the defender. It’s a risky throw but one worth the risk as Osborn would have converted the first down and Thielen did not (3rd and 4th down were incomplete). Maybe logic says take the 80% completion to Thielen (+2 attempts to convert the first down) over the 50% completion to Osborn, but with two minutes left in a low-scoring game, you have to try to win when the play is there.

I don’t think it should have come down to this. There were a handful of absolutely amazing throws Cousins made. This game confirms my opinion that play design and play-calling can absolutely set Cousins up to succeed even if he takes the easy throw on a play like this.

Finally, while I think the Vikings could win this game easily with a better offensive approach, I will encourage you to decide for yourself how many pass interference calls you see on the last play: 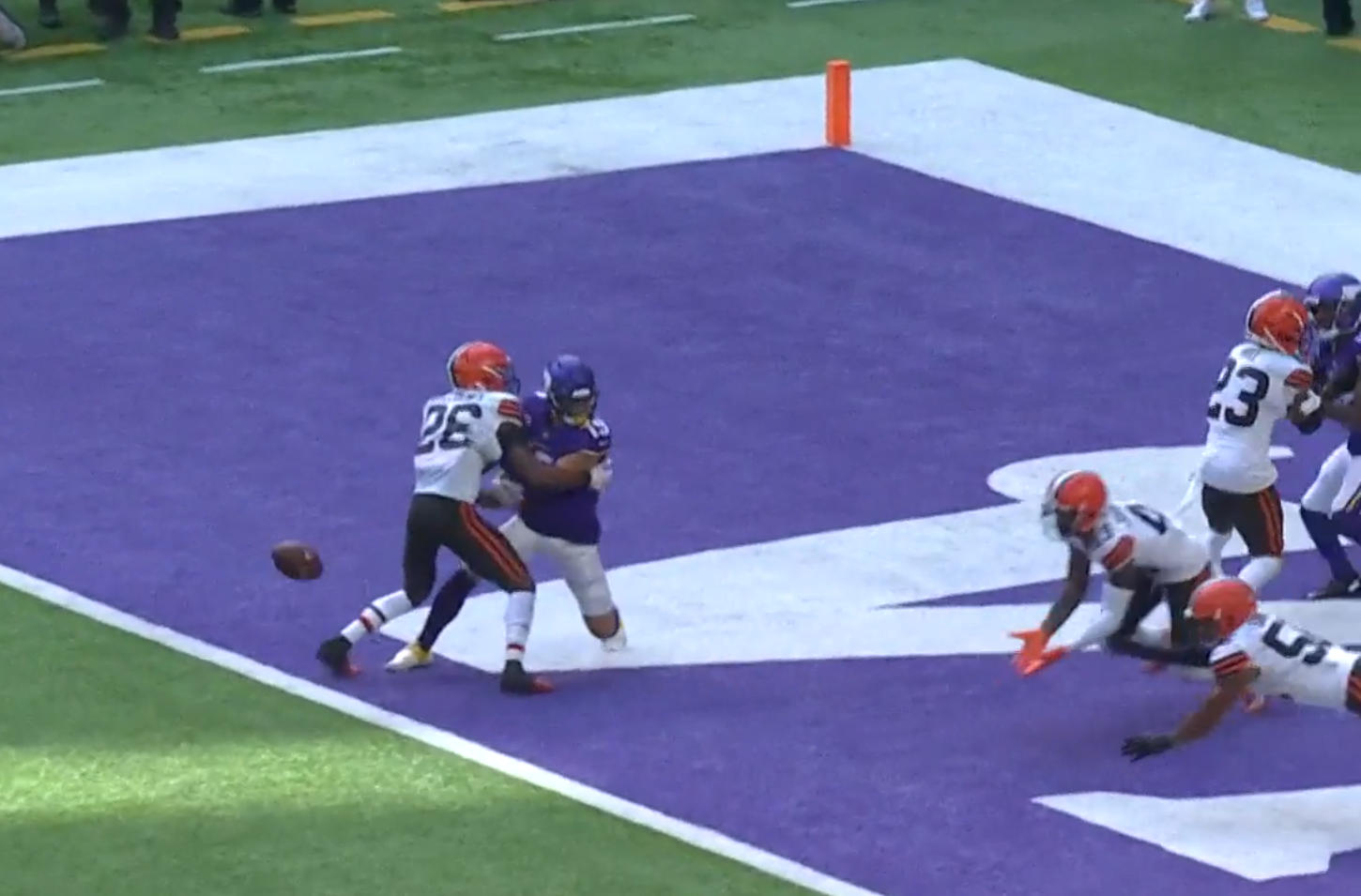