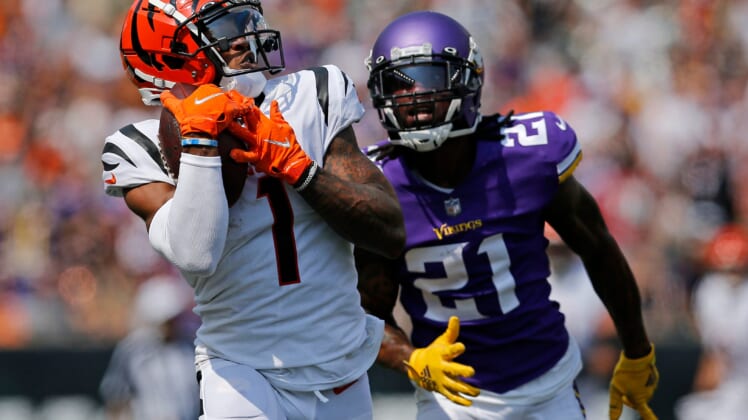 With nothing new going on for a while, I’m going back and looking at all the Minnesota Vikings’ 2021 games. With the context of the entire season and time to marinate, I want to get a better sense of how things went.

I’m looking for a few things:

1) what went well, and considering if this is something that might continue

This is all research for a future post, but with nothing new to write about I can share what I find during my research – oftentimes, comments along the way prompt me to look at things I wasn’t thinking of. I’m not sure what the conclusions will be yet, so as I make it through the season I will also be watching for patterns.

I’m also going to keep a running score along the way. I’m rating different aspects of the game:  passing offense, rushing offense, pass defense, run defense, special teams, and coaching. For each game, each unit will get +2, +1, -1, or -2 (no 0’s – everything has to be positive or negative). Two reasons for this: I wanted to drill into needed changes and see what kind of trends appear.

Interesting stat: Joe Burrow threw for 261 yards, which was below his season average of 288. To get that, he needed overtime and a 50-yard touchdown with 35 seconds left in the first half – that shouldn’t happen. So for most of the game, the Vikings’ defense held the Super Bowl quarterback in check.

Key play: A minute before the 50-yard touchdown, the Bengals were down 7-0 with the ball near midfield and just under two minutes to go in the half. The Bengals looked to be trying to run the clock down and go into the half tied. The Vikings had an offsides penalty, giving Burrow a free play; the free play was a pass interference by Breeland in the end zone. Bengals score, and have time to try the shot to Ja’Marr Chase. This double-penalty really sped up the Bengals’ offense.

Passing offense: Kirk Cousins was mostly sharp. Passes were usually on target, and the passing offense overcame several long down-and-distances. KJ Osborn showed up and made some key plays including a huge fourth-down conversion with 30 seconds left in the game. And this was with horrible pass blocking and an avalanche of penalties. I would be very happy with this version of Cousins; his worst plays were slightly inaccurate passes. Better work on the offensive line and Cousins could have thrown for 450 yards instead of 350. The group should have put up three passing touchdowns but the refs ruled Justin Jefferson down inside the one-yard line on a spectacular catch.

Rushing offense: This was horrible. I think I saw Dalvin Cook with one good run, and that was in the first quarter. He ran hard but the run blocking was terrible, and there was nothing at all there. Cook’s one touchdown should have been a touchdown by Jefferson the play earlier (bad call). Just for good measure, Cook had the overtime “fumble” that likely cost the Vikings the game.

Pass defense: Not as bad as my memory made it out to be; I remembered Burrow and Chase shredding this unit, but that’s not what happened. There was great pressure generated by both the defensive line and blitzes. Short passes were hit and contained quickly. It was really just those two bad plays late in the first half; otherwise, I was satisfied with the pass defense. There were some big-time throws by Burrow, but that’s just a quarterback hitting passes – not terrible pass defense.

Run defense: Not good enough. The pass defense held but the run defense didn’t. The only thing that keeps this from being worse is that there weren’t any big run plays. Mixon is a good back, but the Bengals’ offensive line simply wore down the Vikings’ defense.

Special teams: Really, really good: good punt coverage, no mistakes on returns, and a 50+ yard field goal to tie the game as time expired. This game was all around solid for special teams.  Based on one game, I am happy bringing back the specialists. They could have gotten more out of returns, but I’m not going to worry too much about not breaking a big return in one game.

Coaching: The team flat out wasn’t prepared. There was an obscene number of penalties, called bootlegs that didn’t work, Cook was repeatedly smashed into a line with no holes, etc. Clock management was… actually clock management was pretty good.

Looking to 2022: There were so many things that could have gone differently: The Bashaud Breeland penalty, the Cook fumble, controlling even a few penalties, Christian Darrisaw providing even slightly-improved protection, and so on. The Vikings showed up with the better team and shot their own foot off. If the team can match their play from this game with even slightly fewer and less egregious blunders, they should be fine.

Given the reputation Breeland developed over 2021, I want to take a closer look at him in this game. He at least deserves a fair trial before being convicted of being the cause of all passing-game failures in 2021.

A case in defense of Bashaud Breeland

There were three plays where Breeland was beaten that really influenced the game:

1) the pass interference I mentioned above

2) the 50-yard touchdown to Chase right before halftime

Here are all three of those plays. I’m looking to see if this mistake was on the coaching staff or Breeland just clowning around.

I think this is on Breeland; the ball is in the air and he shoved Tee Higgins rather than turning around to play the ball. Maybe Higgins makes the catch, but a shove definitely gives the ball to the Bengals inside the five.

The game situation in this is important; there were 35 seconds left, and the Bengals had no timeouts.

This isn’t bad coverage. Here’s the problem though:

Ja’Marr Chase runs a 4.34 in the 40 versus Breeland who runs a 4.62. What is Breeland supposed to do here? Run faster? Chase’s top speed is just plain faster than Breeland. He’s got no help over the top. The coaching staff should know the only dangerous play is a deep ball, and they (should) know what Breeland’s physical abilities are. On this play, my take is that Breeland did as much as he could to make this as difficult of a pass and catch as possible, but at some point, a receiver that is straight up faster than the defender will run deep. And Burrow is facing absolutely no pressure on that play, despite five defenders rushing.

The final play – the 28-yard out to Tee Higgins:

Again, Breeland isn’t in a bad spot. But look at how much space he has to cover. Harrison Smith is rotating to the right while Burrow is still surveying the field, and Breeland is left to cover 1/3 or more of the field by himself. If he plays outside in this situation, Higgins can just run straight up the seam for an easy touchdown. In this situation if Burrow puts the pass to the sideline on the money (he did), there is nothing Breeland could do. Breeland did slip on the cut and what could have been a 10-15 yard gain ended up being 28 yards – but even if he doesn’t slip this is a completion for a first down.

Breeland lost all three of those reps, but the question I have to ask is: was he set up for success? He had a chance on the first one, and the pass interference was a mistake. The other two would have been extremely difficult plays to make in 1:1 coverage. All-Pro Jalen Ramsey got beat in the Super Bowl by Higgins and Chase; Breeland was a late-offseason, inexpensive addition. I think the blame falls as much or more on the coaching staff for throwing Breeland into a situation where getting torched was likely – just hoping any ol’ corner will play like peak-form Xavier Rhodes is not a sound plan.