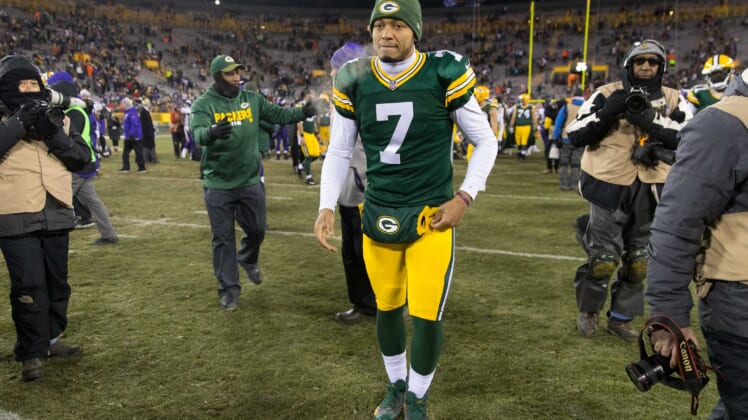 With Kirk Cousins, Kellen Mond, Sean Mannion, and Nate Stanley on the depth chart at quarterback for the Minnesota Vikings, general manager Kwesi Adofo-Mensah opted against adding a QB from the 2022 draft class. Meanwhile, on Friday the team held their first day of rookie minicamp and needed a quarterback or two to play some football. In response, they brought in Brett Hundley on a tryout basis.

Does Hundley have a shot at a roster spot in Minnesota?

Hundley, who was a fifth-round pick by the Green Bay Packers in 2015, has nine career starts, coming in 2017 when Aaron Rodgers suffered a fractured shoulder. He went 3-6, throwing nine touchdowns and 12 interceptions.

In all, the former UCLA product has been on four teams but has only ever played with the Packers and Arizona Cardinals. His last game action came when Hundley threw 11 passes for the Cards in 2019, but the 28-year-old QB spent some time with the Indianapolis Colts last season, bouncing on and off the roster.

Head coach Kevin O’Connell noted how he appreciated having a veteran like Hundley on hand, but also recognized his skill set as a player he’s had an eye on dating back to the pre-draft process when he was with the Cleveland Browns as an assistant coach in 2015.

“Yeah it definitely benefits us, and I thought Pat did a nice job today too, just from a standpoint of the quarterback position on weekends like this, a lot of times, from just being able to call the play in the huddle, to go execute the cadence, and then obviously make good decisions to put the ball in play and throw completions. I mean in my opinion, that position can kind of run the weekend and be either a big reason why it has a lot of success or be one of the sole reasons why it doesn’t, so those guys deserve a lot of credit, both Brett and Pat today.”

“I spent a lot of time on [Brett] coming out of the draft,” O’Connell said. “I’ve always been intrigued by him as a quarterback in this league. He’s kind of bounced around, been in some spots, been coached up well, you can tell in the meeting room. I thought [quarterbacks coach] Chris O’Hara did a great job getting those guys ready to go today, but ultimately we’re just trying to see if we can make our team better in any way, shape or form, any of the positions out here. That’s why the tryout guys are here, they’re here for a reason, that’s what I told them. Compete and we’ll see how everything shakes out.”

Head coach Kevin O’Connell on the value of Brett Hundley during rookie minicamp (H/t to SI.com)

While the team does have a veteran on the roster with Mannion and a couple of younger, developmental prospects with Mond and Stanley, neither O’Connell nor Adofo-Mensah have any ties to any of the quarterbacks on hand, other than Cousins.

It makes sense to look at other quarterbacks, but having Hundley on hand may be more about having an experienced hand during rookie camp to ensure operations go smooth for everyone on the offensive side of the ball. I wouldn’t read too much into it. Besides, teams frequently keep a backup list on hand of emergency players they may need to sign during the season when injuries destroy a particular area of depth, that could be what seeing Hundley in action is all about.

I think Vikings fans would agree, as long as they don’t ever have to witness Sean Mannion throwing a regular-season pass for the Vikings ever again, Hundley, Mond, really anyone other than Mannion would be welcome. But Hundley faces the longest of odds to actually claim a roster spot.