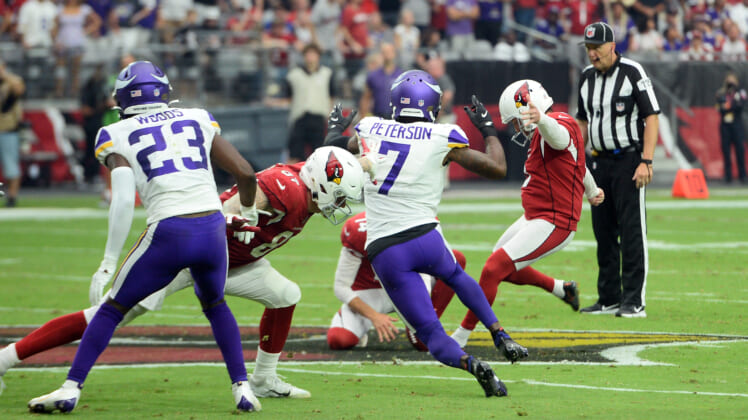 I’m continuing my look back at the 2021 season for the Minnesota Vikings, looking for opportunities and changes that could be made with largely the same personnel for 2022.

I’ll be continuing my scoring of each unit (passing offense, rushing offense, pass defense, run defense, special teams, and coaching). For each game, each unit will get +2, +1, -1, or -2 (no 0’s – everyone has to be positive or negative).

Interesting stat: Sacks by Arizona – 1. This wasn’t a fluke either; the Vikings allowed a pressure rate of 20%. This was below the Cardinals’ season average of 25%, and the Vikings’ season average of 26%. Dalvin Cook also had a really strong game running, but the pass protection stood out more because the 2021 Vikings were supposed to be bad at it. I picked this because, for the rest of this post, I want to remember: the Vikings’ offensive line won the day versus the Cardinals’ defensive line.

Key play: I’m purposefully not going to pick the 77-yard touchdown pass to Rondale Moore because that play should never have had a chance to happen. Instead, I’m looking at the 3:15 mark in the second quarter (the Vikings’ drive immediately before the big play to Moore). Re-watching the game, there were three things going on at this point:

1) Kirk Cousins was absolutely eviscerating the Cardinals’ defense at every level: short, medium and deep. After one and a half quarters, he was 8/9 for 122 yards and 3 touchdowns.

2) Cook looked like a rhinoceros running through a pre-school class.

3) Kyler Murray’s mobility was clearly putting stress on the Vikings’ defense; the results were mixed. The Vikings had made some good plays with the pass rush and stuffed some short passes, but Murray’s mobility had also broken down the coverage.

If you look back at the box score, you will see that Murray had great stats at this point. He had touchdowns on two of the previous three drives – one passing and one running. However, this game was right on the edge of swinging towards the Vikings.

Highlighting two plays from the Cardinals’ prior drive:

First, what does this play look like (Eric Kendricks highlighted)?

Does that look like an interception to you? Because it looks like the Vikings’ best coverage linebacker lining up a tipped pass for an interception. But no, that is not an interception; that is a view of a 34- yard completion to #87 tight end Maxx Williams after the ball bounces off Kendricks’ hands and straight to Williams, thus getting the Cardinals out of a third and long. That was definitely a bad bounce for the Vikings.

The next play was a touchdown-saving hit by Bashaud Breeland that jarred the ball loose from Moore.

Say what you want about Breeland’s play the rest of the year, this play was great. He absolutely put the “bash” in Bashaud, drilling Moore behind the line of scrimmage (which was the Vikings’ 2-yard line) and set up Nick Vigil for a fumble recovery. Or would have – if the refs on replay didn’t rule that Vigil’s foot was in the air when he caught the fumble and gave the ball back to the Cardinals. Here is another bad break; no turnover, and Murray runs in a touchdown on the next play.

That’s a long detour to get to the key play of the game for me. But the detour is important because looking at this play you need to know that the Vikings’ offense is playing really well, and despite what the box score says, the Vikings’ defense is making things really difficult for the Cardinals. It’s only a matter of time before they finish a few plays (like two interceptions coming in the third quarter).

Also relevant here is the key stat: pressure rating. The Vikings’ offensive line is also playing well. There’s no need for trickery; just run them over. The Vikings have the ball with 3:15 left in the half and a 20-14 lead; their last two drives were both nine plays and over five minutes. They can absolutely extend the lead and run out the clock. Then this:

Let’s try some trickery for no good reason. Let’s have four of the Vikings’ linemen abandon Cousins and go block for Thielen; Cousins, of course, can just run around like Murray. Right? To Cousins’ credit, he did avoid the rush long enough to let everyone get in position. This is also not a checkdown; this is very clearly designed and called. But it was so slow to develop, here is how it played out a step later:

Looking at this second snip, for orientation, the line of scrimmage is the 25. This play was a loss of yardage on first down because the play-calling was too cute. It killed a drive that could have buried the Cardinals going into halftime. Two of the next three plays were Cook getting injured trying to convert a third down and a 77-yard touchdown going the other way to give the Cardinals the lead.

Grading the Vikings’ performances in Week 2

Passing offense: Cousins and company shredded the Cardinals the first half. Results in the second half were more mixed; partly because Cook wasn’t the same after his injury, and there were some more penalties. For a deciding factor, I’ll look at crunch time, and I’m not going to mark down this unit because down by one with 81 seconds left, Cousins converted the third-and-long, followed by two more clutch passes to set up a game-deciding kick.

Rushing offense: Not a bad game after a dominant first half. The question is how much do I downgrade this part of the team for disappearing in the second half? Cook didn’t look nearly as dominant after that first-half injury.

Pass defense: Very difficult to rate. Do I rate the unit that blew a deep coverage inside two minutes of the first half for the second game in a row? Or do I rate the unit that opened the second half with two interceptions on the first three drives, including a pick-six? The pass rush was there, and they were close to two more turnovers. They did get three sacks and held DeAndre Hopkins to just four catches and 54 yards, but it can’t be a good score when Kyler Murray throws for 400 yards (his highest season total). It’s funny that this -1 is probably about three plays away from being a +2.

Run defense: No real complaints with this. As I re-watched the game, I barely noticed the Cardinals’ rushing attack because there was so much going on in every other phase of the game. But this unit did give up a high yards-per-carry to Chase Edmonds on eight carries.

Special teams: Another almost impossible-to-rate group. The thing everyone will remember is the missed 37-yard field goal as time expired. But at the end of this game, Greg Joseph was 9/11 (81% on the season, including 3/3 from 50+ yards. Also, there were no big returns given up. As a whole, good, but kickers can’t have a good rating when they miss the game-winning kick; them’s the rules!

Coaching: Strategically? Really good. Tactically? Terrible. The game plan and preparation were both good enough to win the game. But why flip to the page in the playbook titled “stupid screens”? It makes no sense. It doesn’t even play to Thielen’s strengths; if you want to call “stupid screen left”, throw the ball to a kick-return guy like Osborn (who already broke one big play this game).

That wasn’t even the worst tactical crime. With 40 seconds left, and the ball on the 19, the Vikings decided to run out the clock and kick a field goal. The last three plays before that, Cousins was 3/3 for 29 yards – and the Cardinals had shown nothing all day to slow down the Vikings’ pass attack. JUST DO THAT TWO MORE TIMES AND YOU WIN!

Also, the squib kick with 21 seconds left at the end of the first half gifted the Cardinals a short field and three points that would be critical later. I almost want to upgrade this to -1 because of how well things worked between blunders, but that is too many big mistakes by the guys on the sideline.

Finally, I wanted to take a close look at the deep play to Moore. Questions I have: Was this a bad scheme? Bad execution? Guys just getting beat?

Here’s what I think happened.  After the tight end cleared Vigil’s zone, Vigil was very slow to rotate down to cover the back coming out of the backfield.  Mackensie Alexander saw Murray start to scramble and thought the pass was going to the back.  Then this happened – I highlighted where I think the Vikings players should be going.

This looks like a completely boneheaded move by Alexander, bailing on his job to try and cover for Vigil – assuming he knew where the ball was going. It was not a matter of Moore beating his guy.  Murray’s pass was so underthrown that Moore had to stop and wait for it. Had Alexander done his job, this is probably a completion to Edmonds for 5-10 yards, not a game-changing play.

So close and yet so far away. Right, Vikings fans?