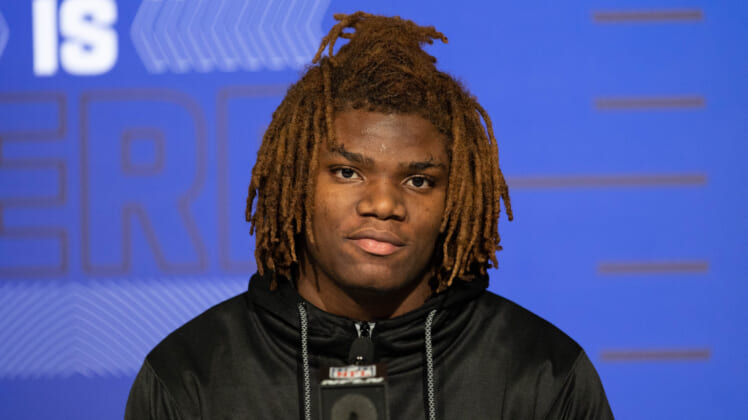 Trade down and trade down some more. This was the entire theme for first-year general manager Kwesi Adofo-Mensah as he ran his first-ever NFL Draft with the Minnesota Vikings.

While there was a flurry of moves, six trades in all, the Vikings managed to add talent on both sides of the ball, with a specific focus on defense, which fits the theme of the offseason. In essence, this was an expected direction after allowing 25.1 points per game a year ago.

Now head coach Kevin O’Connell and defensive coordinator Ed Donatell have several more pieces added to the depth chart helping fill out the roster in the Twin Cities. But how did the Vikings do in the 2022 NFL Draft?

Here we break down each pick and assign a draft grade for the Vikings based on their picks from the three-day player selection process.

Two years ago, the Vikings came away from the draft adding a top player from the top college football team in the nation after winning the CFP Championship with Justin Jefferson. Fast forward to 2022, and they followed the same model, only this time taking a defender with Georgia safety Lewis Cine. Now no one expects a similar immediate impact out of Cine as Jefferson provided, but he can be a Day 1 starter on the defense.

Of course, he’ll have to beat out 2021 fourth-round pick Camryn Bynum first, but Cine will have every opportunity to see immediate playing time. Cine bring a high football IQ with a nose for the football, finding ball-carriers like a homing missile on the gridiron. He has 4.37 speed with a 6-foot-2 frame, giving coaches a platform to drool over.

This pick addressed a serious area of concern, adding to the secondary, which was seen as the team’s biggest remaining need entering the draft.

There were a lot of people whining about Adofo-Mensah not getting better value by trading down from No. 12 to 32 in the first round, but teams simply weren’t getting a treasure chest of picks in this year’s negotiations. Call it a product of the draft class with no true superstars or proven commodities, especially at quarterback.

Those complaints were quickly forgotten once Clemson cornerback Andrew Booth landed with the Vikings at pick No. 42 in the second round. In Booth, the Vikes get a potential CB1 with shutdown potential who could have easily been their pick at No. 32, with many mocks projecting him in the teens in the first round.

Booth can learn from All-Pro corner Patrick Peterson while getting valuable on-field experience, possibly even as the starter opposite P2 from the jump. With Peterson, Booth, Cam Dantzler, and Chandon Sullivan, the secondary suddenly doesn’t look so scary. In fact, there’s a lot of potential within. Even Cam Bynum could see more time at corner after splitting time between safety in college.

Vikings make controversial pick with Ed Ingram in round two

While the Vikings may not have made a splash addition to the trenches this offseason, it was clear, that improving the interior was a priority. After adding three veteran free agents who can compete for the starting right guard job while pushing Garrett Bradbury at center, the Vikes weren’t done addressing their needs in the trenches.

With pick No. 59, they selected offensive guard Ed Ingram out of LSU. This may have been their biggest “reach” of the draft, as many had him projected as a Day 3 pick, but that may have been due to his off-field concerns. For what it’s worth, Vikings staff said they did “extensive research” on Ingram’s history and feel “comfortable with the person”.

On the field, Ingram comes with experience at both guard spots and looks to be able to play center in a pinch. Though he may need to add some weight to his frame, the power he already plays with offers some hope.

At the end of the day, the Vikings didn’t come away with a top-20 player in this draft class, but they wound up adding a ton of depth. Which now that a new regime has taken over, getting your own guys in the locker room can be valuable. We’ll never know exactly why Adofo-Mensah traded down six times, maybe his preferred pick kept getting taken before the Vikes were on the clock, but once you look back at their draft class, they added a lot of defensive pieces who could become starters in short order.