Tom Brady tossed a 58-yard touchdown pass to Breshad Perriman with 5:31 remaining in overtime to lift the host Tampa Bay Buccaneers to a 33-27 victory over the Buffalo Bills on Sunday.

Buffalo scored 17 unanswered points in the fourth quarter to forge a tie before it went three-and-out on its first possession of overtime. Brady threw his second touchdown pass of the day with a soft toss over the middle to Perriman, whose lone catch of the day sent the Buccaneers (10-3) to their fourth straight victory.

Brady improved to 33-3 in 36 career starts against the Bills after completing 31 of 46 passes for 363 yards. Brady moved past Drew Brees with an NFL-record 7,143 completions in his career after connecting with Mike Evans for a 20-yard gain near the sideline with 1:43 remaining in the second quarter.

Brady followed that up two plays later with a 1-yard plunge to give Tampa Bay a 24-3 lead. 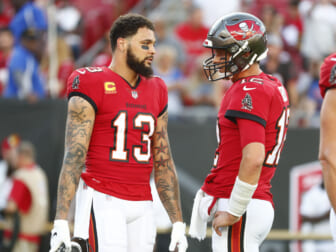 Leonard Fournette rushed for a 47-yard touchdown to highlight his 132-yard performance from scrimmage (113 rushing, 19 receiving). Evans (six catches, 91 yards) reeled in a 13-yard scoring strike and Chris Godwin had 10 receptions for 105 yards for the Buccaneers.

Buffalo’s Josh Allen completed 36 of 54 passes for 308 yards and two touchdowns. He also rushed for 109 yards — including an 18-yard touchdown — for the Bills (7-6), who have lost their last two and five of their past eight games.

The Bills thwarted the Bucs’ fourth-down opportunity before Devin Singletary’s 29-yard rush ignited a nine-play, 81-yard drive. Allen converted a fourth-down chance with a 4-yard rush before scampering 18 yards for a score to trim Tampa Bay’s lead to 24-10 midway into the third quarter.

Ryan Succop drilled a 24-yard field goal early in the fourth quarter to make it 27-10, but Allen provided a quick response. He connected with tight end Dawson Knox for a 15-yard touchdown and Gabriel Davis for a 4-yard score to cut Tampa Bay’s lead to 27-24 with 4:53 left in the fourth quarter.

The Bills forced the Buccaneers to punt and Allen drove the team down to the 7-yard line, resulting in Tyler Bass’ 25-yard field goal with 22 seconds to play.