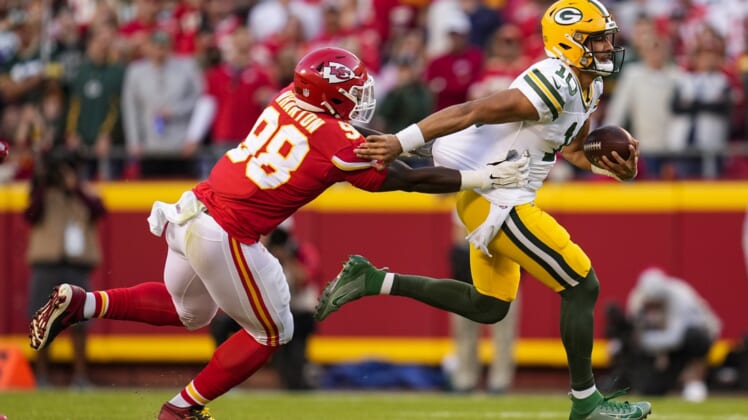 The loss of quarterback Aaron Rodgers after he tested positive for COVID-19 proved costly for the Packers (7-2), who lacked offensive consistency and had their seven-game winning streak snapped.

Love passed for 190 yards, going 19 of 34, though the Packers went only 2-for-12 on third-down plays. Love completed his first nine attempts of the second half, and after an interception by the Chiefs’ L’Jarius Sneed, he connected with Allen Lazard for a 20-yard touchdown pass with 4:54 remaining to make it 13-7.

The Packers could not get the ball back, however, exhausting their timeouts before Mahomes fired a 13-yard strike to Tyreek Hill on third-and-10 from the Green Bay 48 to seal the outcome.

Mahomes went just 20 of 37 as Kansas City seemed reluctant to rely on a decent run game in an effort to thaw out their passer. The Chiefs logged four three-and-outs, exceeding their season total (three).

Darrel Williams rushed for 70 yards on 19 carries. After coming in with a league-high 19 giveaways, the Chiefs committed no turnovers while totaling only 237 yards.

Special teams cost Green Bay in the first half. Mason Crosby missed a field goal and had another blocked. Then, a punt that bounded off the foot of Malik Taylor was recovered by Chris Lammons, setting up Kansas City for an easy 24-yard field goal by Harrison Butker with 1:51 left.

Butker tacked on a 55-yarder with one second remaining in the half after the Packers stalled on downs and gave the Chiefs the ball at the Green Bay 38 with 27 seconds left.

Mahomes engineered a methodical 15-play touchdown drive after Love and Green Bay went three-and-out on their first possession. Williams gained 33 yards on the 64-yard march, which ended with a 1-yard strike to Travis Kelce.

The Chiefs recorded six first downs on the drive before finishing with just 14.