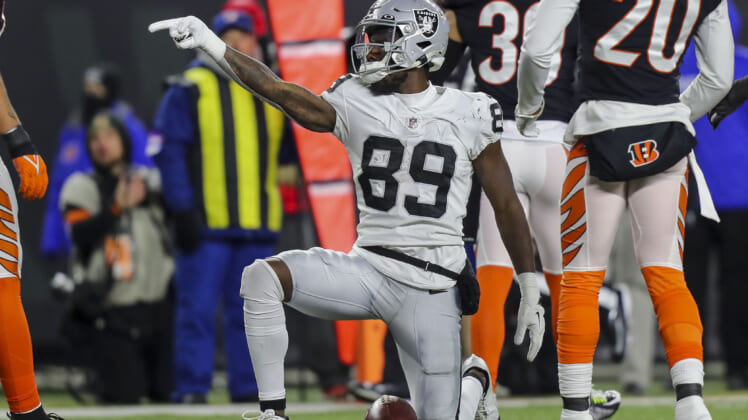 Even after selecting Drake London eighth overall in the 2022 NFL Draft, the Atlanta Falcons are a bit thin at the wide receiver position, thanks to Calvin Ridley’s year-long betting suspension. General manager Terry Fontenot might have just fixed the problem, with a trade for Bryan Edwards from the Las Vegas Raiders.

According to Vinny Bonsignore and Tom Pelissero, the Raiders have agreed to send Edwards plus a 7th-round pick to the Falcons for a 5th-round pick.

How will the Bryan Edwards trade help the Falcons?

Edwards had a breakout year in his second season with the Raiders, nearly tripling his production from his rookie season.

Under contract through the 2023-24 season, trading for Edwards now gives the Falcons a chance to see exactly what type of player he can grow into with training camp not yet underway.

Suddenly the Falcons have a top-three corps consisting of London, Pitts, and Edwards, while still having Cordarrelle Patterson to mix in as a unique weapon out of the backfield. The offense is starting to come together. But the QB is still the biggest question for Arthur Smith’s squad.

Impact of trade for Raiders

The trade shouldn’t impact the Raiders too much after adding Davante Adams this offseason. They also were able to swoop up veteran receiver Keelan Cole on a one-year, $1.2 million contract, to add some more depth to the roster.

Selected by the previous regime of decision-makers led by Mike Mayock, there was no tie to Edwards under current GM Dave Ziegler. Thus, getting a fifth-round pick for a player who was likely to be their fourth option behind Adams, Darren Waller and Hunter Renfrow makes sense.

Now, by adding Cole to the mix, the Raiders should still have plenty of options for Derek Carr. This trade won’t set them back in 2022.