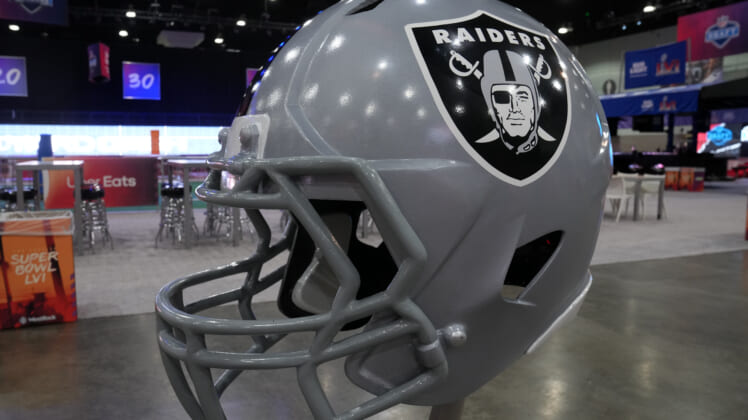 The calendar is inching closer and closer to the 2022 NFL season.

Now we are at the point where the calendar features opponents with dates. The 2022 NFL schedule was announced earlier Thursday, and the Las Vegas Raiders have a schedule that is difficult early and difficult late.

Las Vegas, who is already facing the other AFC West teams twice for a total of six games, have 11 other games that were determined with dates, including the first home game inside Allegiant Stadium taking place Sept. 18 in Week 2, which is in the midst of playing three of the first five games away from home before their Week 6 bye.

On top of their divisional games, the Raiders also play every team from the NFC West and the AFC South. As a result, Las Vegas will have the opportunity to play some of the game’s top teams and some familiar faces with newcomers joining the Silver and Black during the offseason.

Here are the top five matchups on the Raiders’ slate for 2022.

The 2022 schedule is full of rematches and rivalry games to kick off the season and that is no different for the Las Vegas Raiders.

The Raiders begin the season against a team they went down to the wire – in overtime – during the final game of the regular season to clinch a spot in the playoffs last year.

Not only will this be a game featuring two teams who both retooled and upgraded their roster over the spring, but it will also be a revenge opportunity for the Raiders from last year’s 28-14 loss inside SoFi Stadium last October.

In a division where all four teams made moves to increase their roster, this will be the first test to see where Las Vegas is as quarterback Derek Carr enters his ninth season in a Raiders uniform and the first year of his three-year contract extension.

This game is the team’s first matchup inside Allegiant Stadium for the 2022 season and it features two teams in a battle of the desert southwest.

This will also be the first game where Raiders fans get to see newcomers such as head coach Josh McDaniels, Davante Adams, Chandler Jones, Bilal Nichols, Rock Ya-Sin and the team’s first pick of the draft Dylan Parham in a home uniform.

Speaking of Jones, this will be his first matchup against his former club. With all of these newcomers, they will have the opportunity to take on their former team, including when Ya-Sin and the Raiders face the Indianapolis Colts on Nov. 13 in Week 10.

Later on in the season, Las Vegas has a potential schedule that prepares them for the playoffs, and it begins in December. After a home game against the Chargers, Darren Waller and the Raiders go back to SoFi Stadium to take on the reigning Super Bowl Champion Los Angeles Rams which features Matthew Stafford and wide receiver Cooper Kupp.

On top of that, this game comes on a Thursday night, which means McDaniels and the coaching staff will only have four days to prepare. Furthermore, this matchup caps off a stretch of five road games in a seven-week stretch.

Taking on the Rams on a short week – in December – will identify where this team is at and what this team needs to do in the final weeks of the regular season in order to make the playoffs.

This game on the schedule has a lot of sideline intrigue as McDaniels (and general manager Dave Ziegler, plus others) goes up against their former team in the Bill Belichick-led New England Patriots.

On the field, this part of the schedule is where the Raiders and their opponents need wins to punch their ticket into the playoffs and like Las Vegas, the Patriots are in a division of their own that are also in similar shoes.

Las Vegas will face a Patriots team with sophomore quarterback Mac Jones on the other side in primetime at home for Sunday Night Football.

Honestly, I could have picked either game against the Kansas City Chiefs with the first matchup taking place in Kansas City on Oct. 10 in Week 5 for Monday Night Football.

This game to end the season has the possibility to have multiple playoff implications, which is why this date is not quite set in stone, due to the chances of something like last year’s finale between the Raiders and the Chargers.

To cap off the season against three rivalry teams with Las Vegas aspiring to make a deep run in their second consecutive playoff appearance against Patrick Mahomes and the Kansas City Chiefs sets the stage for this game to be in primetime and even be the final NFL game of the regular season – Game 272.

One of the benefits to Las Vegas’ schedule, outside of the dates, is that the final two games and four of the last six matchups will be played at home. This means less travel and more opportunities for Raider Nation to watch players, such as Maxx Crosby, Hunter Renfrow and Kolton Miller late in the year.

One game that cannot be forgotten is a New Year’s Day matchup against another rival in the San Francisco 49ers. A former Bay Area rivalry when the Raiders resided in Oakland continues this upcoming season as Las Vegas hosts San Francisco to commence the beginning of the 2023 calendar year. It should be a wild ride.