The Las Vegas Raiders added six rookies through the 2022 NFL draft and signed several undrafted free agents who will have a chance to crack the 53-man roster late in the summer.

Vegas double-dipped for offensive linemen, defensive linemen and running backs, which leaves some room for improvement at linebacker, a position unit that’s undergone significant changes this offseason, and safety with only two players who have pro experience in that group under contract beyond the 2022 season (Trevon Moehrig and Tyree Gillespie).

Despite the additions at running back, the Raiders may have picked up another ball carrier with a good chance to make the final roster. They also signed several defenders who could play on the second and third levels of the defense. 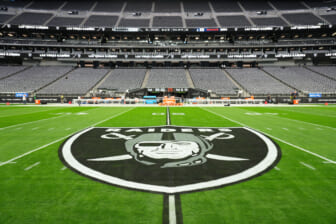 Among the Las Vegas Raiders undrafted free agents, three players stand out as potential candidates to make the roster. They have enough upside and the skill set necessary to turn heads through spring practices and training camp.

Darien Butler played under current Raiders linebackers coach Antonio Pierce, who had the same position at Arizona State and worked his way up to associate head coach and co-defensive coordinator. The undrafted rookie’s familiarity with the former NFL linebacker, his leadership qualities as a three-year team captain, and improved play through the 2021 season could help him earn a spot on the roster.

Before the 2021 campaign, Butler shed some pounds and had his best year at Arizona State, logging 68 tackles, 8.5 for loss, two sacks, three pass breakups and three interceptions. Though critics will knock his 5’10”, 221-pound stature, he’s fit for an early spot on special teams because of his aggressive playing style.

The Raiders coaches can experiment with Butler in a hybrid linebacker/safety role if they think he’s too small to play in a full-time linebacker position. Last year, he showed adequate coverage skills, which may help him transition to an NFL safety who can cover the short-to-intermediate zones.

Sincere McCormick tips the scale at 5’8″, 205 pounds, but no one can argue against his production at UTSA. For each of the last two years, he eclipsed 1,400 rushing yards and logged double-digit touchdowns on the ground (26 in total).

In his first two seasons at UTSA, McCormick had a bit of a ball-security issue, fumbling five times, per Team Rankings, but he went through the 2021 campaign without a turnover, which shows the Raiders can trust him to handle a decent workload on the pro level.

McCormick has more production as a pass-catcher out of the backfield than rookie fourth-rounder Zamir White and rookie seventh-rounder Brittain Brown. He recorded 66 receptions for 509 yards and a touchdown through three terms. His willingness to step to edge-rushers in pass protection and ability to stay on the field in passing situations can help him earn a back-end roster spot as head coach Josh McDaniels builds his running back committee.

If you’re looking for a high relative athletic score (h/t Kent Lee Platte of Math Bomb), Tre Turner isn’t that guy, but he does have a basketball background and could use some of that skill set to become a solid X-receiver who moves the chains with tough catches.

For most of his time at Virginia Tech, Turner played in a run-heavy offense, but he produced steady receiving numbers, racking up at least 529 yards in all four of his collegiate campaigns. He also averaged 17.1 yards per reception and hauled in 14 touchdowns in total.

Turner won’t beat defenders with speed or quickness, which raises concerns about his ability to separate on the pro level, but he’s a detailed route-runner who’s mastered the art of the difficult catch in traffic. The 6’1″, 184-pounder needs to bulk up a bit, though his ability to beat man coverage could allow him to slot behind Bryan Edwards in three-wide receiver sets.

Turner’s physical limitations may lower the ceiling on his upside, but he could become a reliable pass-catching threat on third downs and in the red zone because he fiercely fights defenders for the ball and oftentimes comes down with the reception.

College statistics are provided by cfbstats.com unless otherwise noted.