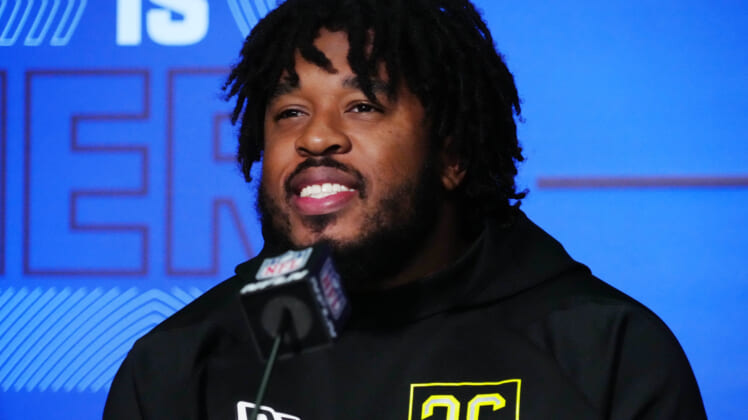 The Las Vegas Raiders had a long wait before their draft could begin. Like many others who swing a blockbuster trade, sending out their top picks, they likely opted to watch Davante Adams highlights on the first day of the draft instead. Still, when general manager Dave Ziegler finally did make his first selection of the three-day event, they were able to get good value at pick No. 90 with Dylan Parham.

How did the Raiders do with the rest of their draft picks? Here we grade their class as a whole from the 2022 NFL Draft.

Dylan Parham addresses an immediate need at No. 90

Hoping to supplement the kickass offense the Raiders have carefully built this offseason, they took to the draft to add some more pieces. With their first pick, they took offensive guard Dylan Parham, who offers positional versatility having played both tackle and guard at Memphis. Parham should be able to immediately compete for a starting role at right guard and possibly at center thanks to his expansive experience.

Parham is an immediate upgrade in the trenches and he comes at a low cost in the third round, right where he was expected to land. As Raiders columnist Moe Moton noted, Parham didn’t even allow a sack across 511 pass-blocking snaps in 2021. Derek Carr should be a happy camper.

Looking at the rest of the Raiders 2022 NFL Draft picks

What are you going to do with just one pick in the top 100? They had a tough hill to climb, but no one is complaining about adding Davante Adams. They will gladly walk away from the draft knowing they improved their chances of giving Carr solid protection, helping in the running game while adding to the trenches on defense as well. It’s not a haul by any means but they could have done worse. This grade does not factor in the Adams trade, if it did, it would be an A.