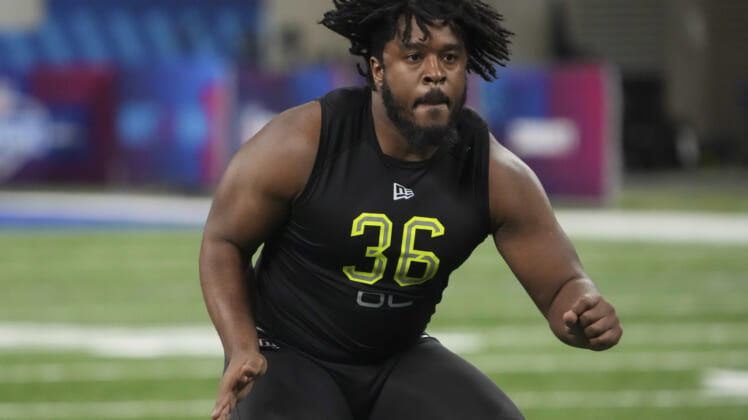 Despite a slow first day Thursday, the Las Vegas Raiders were prepared to pick their first player in this year’s NFL draft, which is being hosted just a few miles away on the Las Vegas Strip.

Raiders general manager Dave Ziegler and the draft team are convening at the team’s headquarters and practice facility at the Intermountain Healthcare Performance Center in Henderson, Nev., just 11 miles away from Allegiant Stadium.

With the Silver and Black not having a pick on the draft’s first day, the team was focused on double-checking certain things ahead of their first pick in the third round tonight.

“Other than them checking to make sure this was the Raiders line, we didn’t have a whole lot of action tonight,” Raiders head coach Josh McDaniels said after Thursday’s first round. “There was very little going on. We were going back on things that we already rubberstamped and making sure. Dotting I’s and crossing t’s.”

Raiders fans and the Las Vegas community had to wait a little bit longer to find out who the team was going to pick.

The Las Vegas Raiders decided to trade their 86th pick to the Tennessee Titans, dropping to the 90th overall spot while also picking up the 169th pick from Tennessee. The 169th pick now gives the Raiders three fifth-round picks in a span of six spots Saturday.

“Being able to add another pick was an attractive part of that trade because it gives you more flexibility throughout the draft,” Ziegler told the media Friday night after the second day. “You can look at it a couple of different ways. It can give you some more swings in terms of more players and it gives more collateral, too, to move up and down the board.

“Overall, it was nice because it gives you flexibility over the next couple days.”

The Las Vegas Raiders also benefit from having another pick from not having a draft pick in the first two rounds.

On the second night of the draft, the Las Vegas Raiders chose guard Dylan Parham from Memphis for their 90th pick to add to its offensive line.

The 6-foot-3, 311-pound lineman was the fifth-best guard on the board, according to ESPN. Parham comes into an offensive line with not as much experience, especially on the right side with 2021 first-round pick Alex Leatherwood at right guard and Brandon Parker at right tackle.

With Parham’s ability to play either spot on the right side, including center, the versatility will play a big role within the offensive line.

Ziegler said the team will allow time for Parham to exercise his resourcefulness to the team, rather than committing him to one position.

As a redshirt senior at right guard for Memphis last year, Parham, who started all 12 games, did not allow a sack and only allowed two quarterback hits in 545 pass protection snaps. As a result, Parham earned First Team All-American Athletic Conference honors.

“We were happy he was still available,” Ziegler said of Parham. “We got a chance to meet him at the combine and you got to meet him face-to-face. You get a better feel for the person and the personality and how that might fit into the room. That was definitely the starting point. We had already watched the tape during the fall.”

Las Vegas to have 4 picks in 4th & 5th rounds Saturday

By having four picks in the fourth and fifth rounds tomorrow, Ziegler and the draft team will have to kickstart early unlike the first two days filled with patience.

“It’s like you’re waiting and waiting and waiting, and it’s exciting,” Ziegler said. “That’s part of the juice of seeing who’s going to be there and maneuvering around the board and seeing what opportunities you have. So, it will be good to get going early on the west coast time and get rolling.”