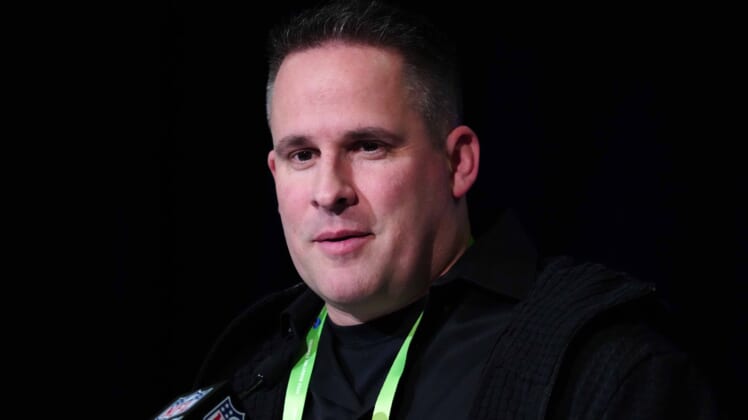 The 2022 NFL Combine is taking place this week at Lucas Oil Stadium in Indianapolis, the home of the Indianapolis Colts.

College stars are looking to take the next step in their football career in front of the game’s best coaches and scouts.

One of those coaches in attendance is new Las Vegas Raiders head coach Josh McDaniels.

Here are three takeaways about not only the combine but also how McDaniels is fitting in as the newest head coach of the Silver and Black.

In this year’s combine, more than 300 NFL prospects will take the field in Indianapolis, looking to increase their draft stock ahead of next month’s draft.

From the 40-yard dash to the vertical jump, these prospects will look to get the attention of NFL coaches and team scouts this week.

When it comes to scouting for McDaniels, he said there is a multitude of aspects to assess.

“The evaluation of the player is rather large,” McDaniels told the media Wednesday afternoon. “There’s a lot of things to consider and honestly, there’s certain players that may have a level of experience against competition that’s significant. But every one of these guys coming out of draft that you add to your football team are going to need to grow and improve and learn how to play at our level, regardless of where they played college football.

“We’re going to try to sink our teeth into each guy, each opportunity to learn about them and digest that information as best we can and make the best decisions possible.”

Josh McDaniels on approach to scouting

With the various levels of college football experience, ranging from playing at a school like Clemson, wide receiver Hunter Renfrow’s alma mater, or Easter Michigan, the alma mater of defensive end Maxx Crosby, evaluations go far beyond the university the player attended.

Over the last month since McDaniels and general manager Dave Ziegler were hired, there has been constant communication between quarterback Derek Carr and his new coach.

As the coaching staff is coming together, building the relationship between the two is vital, especially with a veteran quarterback like Carr, who’s been to the playoffs twice with the Raiders.

“We’re trying to get everything set in the building,” McDaniels said. “I’ve met and spoken to Derek a number of times now, trying to begin our relationship. I think it’s really an important one. The head coach, the play caller, the quarterback. Getting to get to know one another as people, how we think, how we work.

“The football part of that will come later, which is also an important part of the puzzle. Really happy with the opportunity that I’ve had to get to know him.”

Carr, who helped Las Vegas get to the playoffs for the first time in six seasons with 10 victories in 2021, recorded a new Raiders franchise single season record for passing yards with 4,804.

The eighth-year quarterback, who is entering the final year of his contract, has not yet had contract extension talks with Ziegler and McDaniels.

“No specific things relative to extending that at this point, but that doesn’t mean that’s going to change,” McDaniels said of possible contract extension talks with Carr. “We are aware of where we’re at on that in that process.”

In the next few months leading up to offseason training camp in June, the communication between a head coach and its players, highlighted by the quarterback will be crucial to set the groundwork for 2022.

3. Connecting with younger players to continue in 2022

McDaniels will keep collaborating with younger players in 2022, such as offensive lineman Alex Leatherwood, who was picked two slots after Jones.

Like Jones, Leatherwood started all 17 games as both first-year players each got their first taste in the playoffs.

McDaniels said his early assessment of Leatherwood is knowing the amount of film he got to watch on the rookie lineman thanks to all the experience he gained in his first season.

“I see him as a guy who played a lot of football. There’s a lot to evaluate,” McDaniels said of Leatherwood. “Playing as many games as he did as a rookie, there’s good and there’s bad. But when you’re that young, you look at it as what can we work with, what can we fix. There’s a lot to do in that process.”

As the 45-year-old head coach continues to establish relationships with coaches and players in his first year, McDaniels looks to get everyone on the same page within the next few months.

“I think you do them both at the same time,” McDaniels said. “We’ll try to teach our foundation and our terminology so that we understand the language. Everything starts with what language are you going to speak. We’ll teach everyone that in the spring, or whenever we get that opportunity.”