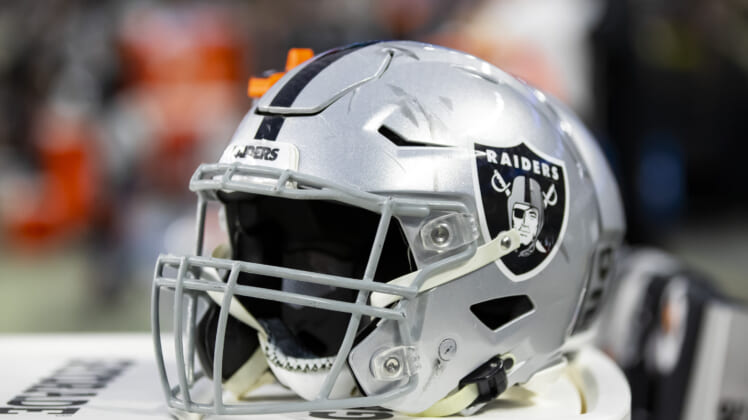 Las Vegas Raiders general manager Dave Ziegler and head coach Josh McDaniels don’t have to tear down the roster, but they must reload at multiple positions.

Assuming the Raiders sign quarterback Derek Carr to an extension, they’ll address the biggest roster question of the offseason, but his offensive line needs upgrades, and the pass-catching group doesn’t have enough speed on the perimeter.

By the way, we saw the importance of a solid defense that can get off the field on third downs during Vegas’ four-game win streak late in the 2021 campaign. The front office will probably have to replace key parts of that unit, specifically the defensive line and on the corner of the secondary.

With free agency about a month away (March 16th), let’s go through a ranking of the Raiders’ top five position needs from least to greatest.

Regardless of Alex Leatherwood’s position, right guard or right tackle, the Raiders must beef up the interior of their offensive line.

Let’s say Leatherwood opens the season at right guard—the front office should find an upgrade for John Simpson on the left side. He committed the second-most penalties among the team’s offensive linemen in 2021, per Pro Football Focus. While the Clemson product looks decent in pass protection for stretches, McDaniels may want to at least challenge the second-year pro with a veteran in the offseason. 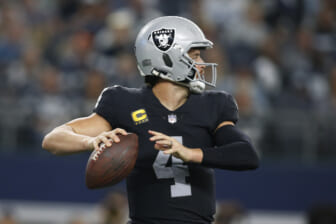 Per The Athletic’s Vic Tafur, Richie Incognito and Denzelle Good beat Simpson in position battles for the guard spots last offseason, but the former couldn’t shake a calf injury, which sidelined him for the entire 2021 campaign, and the latter tore his ACL in Week 1.

Coming off a serious knee injury with only one year left on his contract, Good could be a cap casualty as he goes into his age-31 season.

If Leatherwood starts at right tackle, the Raiders might have two new starting guards in 2022.

Wide receiver drops a couple of spots on the needs list because McDaniels has featured two tight ends in the passing game as the offensive play-caller for the New England Patriots.

Last offseason, as the de facto general manager of the Patriots, Dave Ziegler spent $87.5 million on Smith ($50 million) and Henry ($37.5 million). In Vegas, McDaniels will likely use Darren Waller and Foster Moreau as a pair in two-tight end sets. This past season, the duo combined for 1,038 receiving yards and five touchdowns.

With Waller healthy and wideout Hunter Renfrow’s rise to become quarterback Derek Carr’s favorite target when the star tight end isn’t on the field, the Raiders can mask their receiver needs if they employ more 12 personnel looks (one running back, two tight ends and two wide receivers).

Renfrow can line up in the slot or on the perimeter and handle a high value of targets as we saw this past season. With that said, McDaniels could add a deep-threat perimeter weapon to replenish what the offense lost after waiving Henry Ruggs III.

Bryan Edwards will probably have another year to grow in a new offense, but he’s a big-bodied (6’3″, 212 lbs) possession receiver. The Raiders tried to inject speed into the aerial attack with the addition of DeSean Jackson in November. As the 35-year-old and Zay Jones hit free agency, expect the front office to add a couple of wide receivers who can put some pressure on opposing safeties downfield.

Casey Hayward Jr. just had one of his best seasons, allowing a 57.1 completion rate and three touchdowns in coverage. He also broke up nine passes and snagged an interception.

While Hayward didn’t generate a bunch of turnovers, at times he shut down his side of the field and consistently limited gains over the top. The 32-year-old may follow former Raiders defensive coordinator Gus Bradley to the Indianapolis Colts, leaving a void on the boundary opposite of Trayvon Mullen. 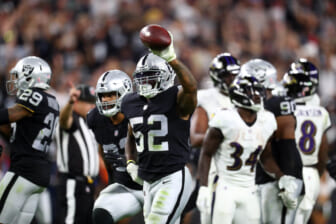 Though rookie fifth-rounder Nate Hobbs has collegiate experience on the boundary, he excelled in the slot under Bradley. Defensive coordinator Patrick Graham can keep him in that spot and find a veteran cover man in free agency or push to draft a high-end prospect in a strong class of cornerbacks.

Graham will adjust his schemes to a player’s strengths, but he made a point to highlight the importance of playing man coverage last summer.

Don’t be surprised if the Raiders acquire a cornerback who can press at the line of scrimmage and stick to receivers with speed and route anticipation.

This isn’t a premium position. Typically, teams use a rotation of defenders between the edge-rushers. However, the Raiders have five notable players within the unit set to hit the open market.

If Johnathan Hankins, Quinton Jefferson, Solomon Thomas, Gerald McCoy, who’s recovering from a torn ACL, and Darius Philon, who’s on the mend with a torn patellar tendon, all sign elsewhere, the Raiders would lose a combined total of 2,092 defensive snaps across the front line from last year.

In recent years, Graham has worked with 300-plus-pound interior linemen, so keep that in mind with the Raiders’ acquisitions regardless of what type of alignment (odd- or even-man front) he runs in 2022.

Under Bradley, Vegas had its issues stopping the run until Week 15, giving up 122-plus rushing yards in nine out of 17 games.

Because of all the expiring contracts within the defensive line unit, expect the Raiders to completely revamp that group, bringing in bigger bodies and at least one aggressive penetrator to challenge opposing guards on passing downs.

As noted above, Good isn’t a lock to make the roster at his age (31) following a significant knee injury. The front office can release him and save about $4.2 million, per Over the Cap.

Even if he remains on the roster, the Raiders can do a lot better at right tackle if Leatherwood continues to play at right guard. Brandon Parker will likely find a new career home after another subpar campaign. He allowed 120 quarterback pressures and 22 sacks in 2,199 career snaps, per Pro Football Focus.

Going into the offseason, the Raiders don’t have a reliable full-time right tackle, which seems like a perpetual issue with this club for decades. Good hasn’t played more than 283 snaps at right tackle in a single season, per PFF. He’s primarily a guard.

If Ziegler and McDaniels want to build a strong offensive line, they’ll need to bolster the right side. With Leatherwood still learning on the job, the offensive lineman next to him should be an established veteran or a top prospect who’s pro-ready.

The new coaching staff may give Leatherwood another shot to start at right tackle but even if that’s the case, the Raiders should sign a veteran who could be an insurance policy if he continues to struggle mightily with pass protection on the outside.