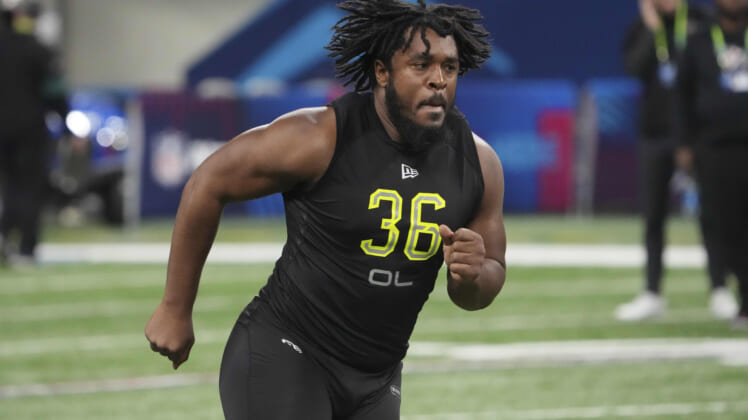 Las Vegas Raiders general manager Dave Ziegler made the hometown fanbase wait a little longer before the team made its first pick, moving back from No. 86 to 90 in the third round. On the clock, the Silver and Black picked offensive linemen Dylan Parham, who had previous discussions with the club at the NFL Scouting Combine.

According to Parham (h/t ESPN’s Paul Gutierrez), Raiders’ brass asked him if he sees himself as a guard or center. For now, he’ll keep his options open.

After a redshirt 2017 campaign, Parham transitioned from a tight end/defensive end to left guard where he started two seasons. The Memphis product moved to right tackle for the 2020 term and then finished up at right guard last year, coming into the pros with 51 collegiate starts.

In 2021, Parham didn’t allow a sack while on the field for 511 pass-blocking snaps, per Pro Football Focus. The 6’3″, 311-pounder may not start at his natural position though. His body type, athleticism, agility and football IQ (with all his experience) can lead him to a role at the pivot.

During Senior Bowl week, Parham took some reps at guard and center and held his own.

At the combine, several teams had inquiries about Parham’s ability to transition to center—possibly because of concerns about his size against bigger pass-rushing defensive tackles. The versatile lineman’s projected position isn’t quite clear yet.

On Friday, Parham told the media that he’ll have an opportunity to play guard or center. Remember, the athletic interior lineman didn’t start a single game at the pivot on the collegiate level. Even if his traits translate well, the Raiders will have to put him in live action (the preseason) to see how he fares against competition in a new spot.

Parham does have occasional issues with establishing a firm base. At times, defenders rocked him backward, but he has great balance to recover when initially beat at the line of scrimmage.

On run downs, Parham stands out with his ability to pull, get out in open space on screens, seal off initial blocks and reach the second level to create big holes for ball-carriers.

Of course, the Raiders will allow Parham to carve out his role at practices over the next few months. He can easily slide into a starting right guard spot over Denzelle Good, who’s 31 years old, on the final year of his contract and coming off a torn ACL. We have no idea what the coaching staff thinks about John Simpson holding on to his starting job either.

If Parham makes a seamless transition to center, what happens to Andre James?

Last offseason, the previous Raiders’ regime signed James to a three-year, $12.5 million extension, and he started all 17 games at center through the 2021 campaign. After some early struggles, the fourth-year pro showed some improvement but still had some issues in pass protection.

On one hand, James committed eight penalties through the 2021 season, but he only drew one flag after Week 12. Yet he allowed three sacks between Week 15 and the wild-card playoff game against the Cincinnati Bengals, per Pro Football Focus. 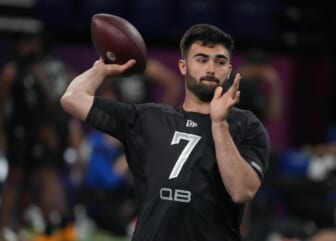 If Parham takes over at the pivot, he could upgrade quarterback Derek Carr’s interior pass protection. In the event that James loses his starting spot, he may add depth at tackle.

Remember, James played right tackle in place of an injured Kolton Miller in 2016 at UCLA and moved into a full-time role through the 2017 campaign as the former shifted to left tackle. In his final year with the Bruins, James replaced Miller, whom the Raiders selected in the first round of the 2018 draft.

If the Raiders insert Parham at right guard where he started through the 2021 term at Memphis, we’ll probably see Alex Leatherwood at right tackle, which is a risky strategy with two offensive linemen who have limited or no pro experience on the same side. For that reason, we shouldn’t rule out the idea that Simpson could flip to right guard. As a backup at Clemson, he took snaps on the right side.

Raiders head coach Josh McDaniels and offensive line coach Carmen Bricillo have to solve a front-line Rubik’s cube before Week 1. Right now, Miller is the only certainty at left tackle. Everyone else will find themselves in a training camp battle through the summer.

Vegas still has five draft picks between Rounds 4 and 7. Ziegler could acquire another offensive lineman or two to give McDaniels more options as the Raiders look to field the best five-man group for the 2022 season opener. Parham could become the glue that holds that unit together.