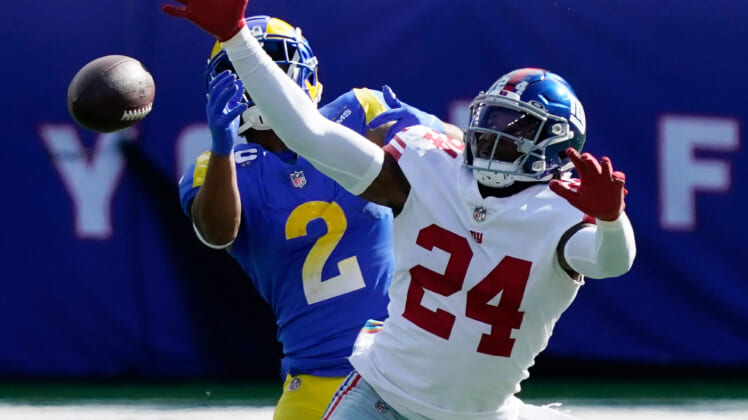 The Las Vegas Raiders reportedly are in the hunt to sign new free-agent cornerback James Bradberry.

On Friday, the New York Giants agreed to the release of one-time Pro Bowler James Bradberry, after playing two seasons for the franchise. The move was not at all a surprise and was seen as an eventuality throughout the league.

The Giants have been cash strapped throughout the NFL offseason and have actively looked to move Bradberry — and running back Saquon Barkley — in a trade to free up valuable salary cap space. However, the organization and new general manager Jim Schoen never received the sort of offer they were hoping for in a return for the former Carolina Panthers draft pick.

Las Vegas Raiders in the hunt for James Bradberry

With the Giants receiving underwhelming offers over the last two months, the team decided to release the CB and get $10.2 million in cap savings for the upcoming season. The franchise’s failure certainly was not an indication of a lack of interest, but more other organizations’ understanding sending back a notable return wouldn’t be worth it when the Giants were very likely to release Bradberry if they could not make a trade.

Well, in an early sign of what is sure to be strong interest from throughout the league, Vincent Bonsignore of the Las Vegas Review-Journal reported on Monday that the Las Vegas Raiders are expected to pursue Bradberry in free agency. The report comes on the heels of news just days ago that the Raiders would be a likely landing spot for the defensive back if his services became available.

Trayvon Mullen, one of the Raiders’ likely starting perimeter corners underwent surgery last week, making his status in question and the need for starter level depth in the secondary for Las Vegas a new priority. Also, the team’s new defensive coordinator is Patrick Graham. The same man that held the job for the Giants over the last two seasons, and the coach who helped Bradberry make his first Pro Bowl team in 2020.