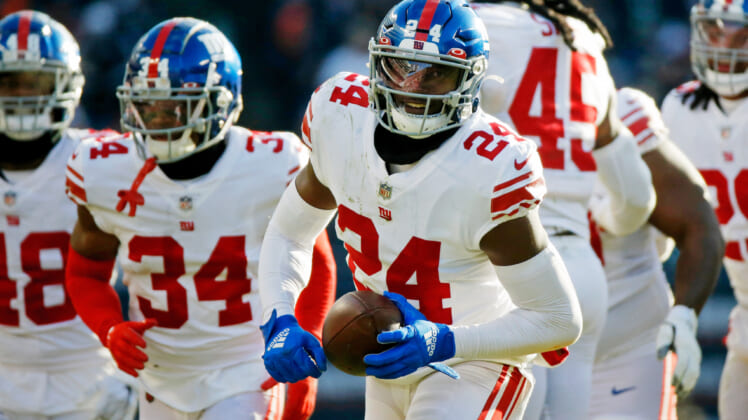 Fans of the New York Giants are rejoicing after coming out of an NFL Draft feeling like they just took a massive bite out of the Big Apple needed to compete in the near future. Yet, not all is well among Big Blue with some of the other members remaining on the roster. Most notably, Pro Bowl cornerback James Bradberry didn’t get traded during the draft after months of rumors suggesting the 28-year-old player would be available.

It appears no matter what, the Giants and Bradberry are headed for divorce. According to Zack Rosenblatt, a Giants beat writer, it’s come to the point where the G-Men may just prefer to release the CB altogether. Dan Duggan follows with a more recent report suggesting his release could come by the end of the week.

Doing so would leave behind dead money on the 2022 cap yet, the alternative — designating Bradberry as a post-June 1 cut wouldn’t drastically improve their cap outlook either, but it is a small improvement.

If the Giants did decide to make him a post-June-1 release, Bradberry’s contract leaves behind a $10.3 million dead salary amount, saving them $11.5 million.

When/if Bradberry is released from his contract, despite teams not wanting to jump at paying him a cap number of $21.8M in 2022, there figures to be plenty of interest in the former top corner. Here are three teams who could rush to sign the cornerback once he becomes a free agent.

This would be irony at its finest. After facing the Eagles twice per year each of the past two seasons, if the Giants no longer want Bradberry on their team, maybe he wants to get his revenge by signing with Philly. The Eagles already had a strong pass defense a year ago, ranking 11th in pass yards allowed, but have since seen 16-game starter Steven Nelson sign elsewhere.

If the team brass doesn’t feel Zech McPhearson is ready to start as a boundary corner outside, maybe getting Bradberry to fill the role would solve their needs until the 2021 fourth-round pick is ready for more. Bradberry split duties between playing left and right cornerback with the Giants and could do the same in Philadelphia in 2022. Plus, the extra chip on his shoulder could help provide a few more playmaking opportunities in the NFC East.

The best year Bradberry has had in the NFL came when playing in new Las Vegas Raiders’ defensive coordinator Patrick Graham’s scheme. While I don’t know for sure, one would bet Bradberry would be eager to reconnect with his old coach once again.

After identifying the cornerback position as a need early in the offseason by acquiring Rock Ya-Sin for Yannick Ngakoue, general manager Dave Ziegler has largely left the secondary alone since. This could end up backfiring if Trayvon Mullen posts another coverage grade of just 64.3 as he did last year in his second season. Meanwhile, Bradberry has just one season below that mark in his six years in the NFL. From a coverage perspective, he’d be an immediate upgrade in the desert.

Like the other teams on this list, the Pittsburgh Steelers too had a strong pass defense a year ago but they ranked in the middle of the pack in capitalizing on interceptions, picking off 13 passes in 2021. Bradberry has always had above-average ball skills, intercepting a pass in each of his six years since entering the NFL as a second-round pick in 2016. This is where Bradberry could help fuel an already efficient unit otherwise.

The Steelers are likely to start Levi Wallace and Ahkello Weatherspoon at corner to begin the year, but behind Cameron Sutton, there isn’t much depth on this roster. Bradberry could solve that in a hurry while competing for a starting role in coach Mike Tomlin’s defense. It could be the perfect fit.