The New York Giants are a team with a ton of momentum and confidence as they prepare for Saturday’s Divisional matchup against the Philadelphia Eagles.

They just upset the Minnesota Vikings 31-24 in the Wildcard Round and the week prior, their backups almost beat the Philadelphia starters in the regular season finale.

But, you don’t have to worry about this team being overconfident. They remember the 48-22 thrashing they suffered at the hands of the Eagles in Week 14, as head coach Brian Daboll will have his team grounded and focused for Saturday.

Daboll was asked this week if his team would have any added motivation to avenge their blowout loss from earlier in the season. “No, every game’s different in this league. Every time you play a team — whether it’s the second time, third — it’s all different. What matters most is our process leading up to it and then how we play,” he said.

New York will need to play their best football in all three phases if they’re going to advance to the NFC Championship game. next weekend. With that in mind, here are four bold predictions for the New York Giants NFL Playoff clash against the Philadelphia Eagles on Saturday night.

Daniel Jones will rush for over 100 yards

Last week against the Vikings, Daniel Jones ran the ball a season-high 17 times for 78 yards. This was not done by accident as offensive coordinator Mike Kafka called several designed runs for his mobile quarterback.

It’s expected that the New York Giants could have difficulties throwing the ball against Philadelphia as they were number one in pass defense giving up just 179 yards per game through the air, and they have arguably the best cornerback tandem in Darius Slay and James Bradberry. So Big Blue will have to rely on Jones and Saquon Barkley running the ball in order to have sustained success. 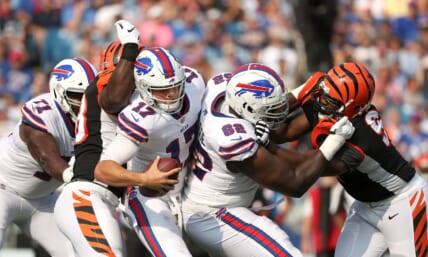 Expect another heavy dose of designed runs for the 25-year-old quarterback, and as a result, he’ll have over 100 rushing yards against an Eagles defense that has struggled against the run at times this season.

In order to pull an upset on the road in the playoffs, often you need a big play by your defense or special teams to turn the momentum in your favor. You can be assured that defensive coordinator Wink Martindale has been preaching all week that it’s imperative that they force turnovers against the Eagles’ third-ranked offense in the league (389 yards per game).

Not only will the New York Giants force turnovers on Saturday, but they’ll convert one of those turnovers into a score. Whether it’s Kayvon Thibodeaux getting another strip-sack and recovery for a touchdown or perhaps Adoree’ Jackson intercepting Jalen Hurts for a pick-six, the defense will score a touchdown.

Evan Neal won’t give up a sack versus Philadelphia Eagles

In their first matchup, the Eagles’ pass rush overwhelmed the New York Giants’ offensive line as Jones and Tyrod Taylor were sacked a combined seven times and pressured 33 times.  The culprit of some of those sacks was right tackle Evan Neal, who struggled mightily as Brandon Graham and Haason Reddick beat him off the edge consistently.

By his own admission, Neal acknowledged that he’s had an up-and down-season, and he also struggled against the Vikings last week giving up eight pressures. But he’s ready to redeem himself and is confident that he’ll fare better than he did in the first matchup. 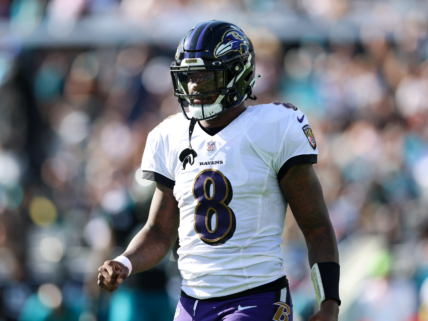 “I’m getting a better feel for them, and as I study those guys, having that in-game experience against them will help me prepare,” Neal said earlier this week. Look for the seventh overall pick to have a bounce-back game and not give up a sack.

Since arriving in New York, Graham Gano has been one of the most clutch kickers in the league. This season he connected on 29 out of 32 field goal attempts and has converted on 18 out of 20 attempts on kicks from 40 yards or longer.

In a clash that is expected to be close, the kicking game will be instrumental in deciding the outcome. The Giants have a history of kickers, such as Matt Bahr and Lawrence Tynes, who have kicked game-winning field goals as time expires in NFC Championship games to advance Big Blue to the Super Bowl.

Well, this time they’ll get a clutch kick in the Divisional Round as Gano will connect on a 47-yard field goal as time expires to send the New York Giants to the NFC Championship game as they win 26-23.