After the Baltimore Ravens lost to the Cincinnati Bengals in the AFC Wild Card Round, speculation around Lamar Jackson swept through NFL discussion circles. Will he re-sign with the Ravens or force his way out to play elsewhere on a new lucrative contract?

With the Las Vegas Raiders set to part ways with Derek Carr via trade or release, could the Silver and Black sniff around on the dynamic quarterback’s availability?

According to Draft Kings, the Raiders have the third-best odds to land Jackson. Despite the intriguing odds, Jackson seems like a Las Vegas Raiders pipe dream rather than a potential starter in 2023. If you search through the interwebs, you’ll find a lot of reporters and analysts link Vegas to Tom Brady, who’s undecided about his future, but you won’t find many credible sources that draw a connection to Jackson.

Though the lack of chatter around the Raiders and Lamar Jackson doesn’t mean a deal won’t happen, the quarterback’s contract situation will likely discourage the Raiders from aggressively pursuing him in the offseason.

First, let’s take a look at Jackson’s situation with his current team.

The Ravens have some leverage with the franchise tag, which they can use starting February 21 through March 7. If Baltimore applies the one-year tender to keep Lamar Jackson under team control for another term, the club would be able to prevent him from negotiating with other teams (exclusive franchise tag) or recoup two first-round picks in the event that he signs an offer sheet with another squad (non-exclusive franchise tag).

As CBS Sports’ Joel Corry explained, the Ravens won’t allow Jackson to hit the free-agent market because they wouldn’t receive appropriate compensation for him in that scenario. So, we should expect them to use a version of the franchise tag if the two sides cannot agree on a new deal.

“There is no way the Ravens are letting Jackson hit the open market. At best, the Ravens would receive a compensatory third-round pick in 2024 with Jackson leaving in free agency. It’s really a question of whether the Ravens will use the non-exclusive or franchise designation on Jackson absent a long-term deal before 4 p.m. ET on March 7. The non-exclusive tag allows a player to negotiate with other NFL teams, but if he signs an offer sheet with another club, his team has five days to match the offer. If the offer is not matched, his team will receive two first-round picks as compensation from the signing team.”

By the way, according to NFL Network’s Ian Rapoport, the Ravens plan to engage Jackson’s camp in talks on a long-term deal.

Unless Jackson forces his way out of Baltimore because he’s unhappy with how contract discussions proceed, he’s probably back with the Ravens in 2023. We could see this financial saga extend into the summer near the July 15 deadline, which is the cutoff date to sign franchise-tagged players to a multiyear deal.

But what if Jackson wants out of Baltimore in frustration with his contract situation?

As mentioned above, the Ravens will probably try to capitalize on their best asset if they feel its best to trade Lamar Jackson. Using the non-exclusive franchise tag, Baltimore isn’t likely to consider a trade package unless it includes two first-round picks and additional selections.

Remember, Jackson has helped lead the Ravens to the playoffs in four out of his five seasons, and he’s a former league MVP (2019) with two Pro Bowls and an All-Pro campaign on his resume.

In the most recent blockbuster trade that involved a quarterback, the Denver Broncos sent two first-rounders, two second-rounders, a fifth-rounder and three players (tight end Noah Fant, defensive lineman Shelby Harris and quarterback Drew Lock) to the Seattle Seahawks in exchange for Russell Wilson and a fourth-round pick. 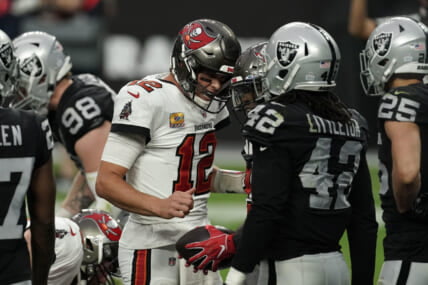 Wilson has won a Super Bowl and has nine Pro Bowl seasons, but Jackson’s trade value compares because he’s in the early prime of his career at just 26 years old. Seattle dealt a 33-year-old Wilson this past offseason.

If the Las Vegas Raiders have an interest in Jackson, they would have to give up a boatload of draft picks for him, which would hinder their ability to fill out a roster that has several holes across the defense and needs upgrades along the offensive line. By the way, Josh Jacobs, who’s the 2022 rushing champion, needs a new deal.

General manager Dave Ziegler would have to put the utmost trust in his scouting department to find a bunch of Day 3 rookies who can contribute because he would have to pay a market-setting salary to Jackson after giving up a treasure chest of draft picks for him, which leads us to the final snag in a potential deal for the Ravens quarterback.

Over the last two seasons, Lamar Jackson has missed 11 games (including the playoffs) because of ankle and knee injuries, which isn’t something you want to hear about a dynamic signal-caller who’s a special player partially because of what he can do with his legs to extend plays, break off big gains and create something out of nothing.

According to ESPN’s Adam Schefter and Chris Mortensen, Jackson wanted a top-of-the-market fully guaranteed deal last offseason when he rejected an offer from the Ravens.

“The extension years in the Ravens’ proposal would have paid Jackson a higher average salary than the deal signed this summer by Broncos quarterback Russell Wilson and Cardinals quarterback Kyler Murray and also included more money guaranteed at signing, according to sources.

“But sources told ESPN that the Ravens also balked at Jackson’s wish for a deal that was fully guaranteed at signing, similar to Deshaun Watson’s, prompting the sides to announce Friday that they had tabled contract talks until after the 2022 season.”

Ziegler may not want to lock the team into that type of contract structure with a player who’s been unable to stay healthy in December and January in consecutive years.

For any player, one injury-riddled season can be a blip, but back-to-back shortened campaigns look like the beginning of a trend, especially for a player who uses his legs as much as Jackson does. In five seasons, he’s registered 727 carries for 4,437 yards and 24 touchdowns. 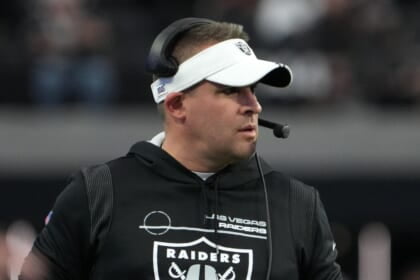 Any team that’s willing to trade a bunch of picks and pay Jackson about $50 million per year on a fully guaranteed contract must consider his recent injury history because of his play style.