While there will be many suitors in a potential Lamar Jackson trade, it seems that the Atlanta Falcons and Carolina Panthers are the odds-on favorites, among many NFL executives, to land the former MVP if the Baltimore Ravens make him available.

One of the biggest stories in the upcoming NFL offseason will be the future of superstar quarterback Lamar Jackson. The 26-year-old will be a free agent, however, the Ravens are expected to use their franchise tag on him. Whether they use an exclusive or non-exclusive tag, it is far from a guarantee that he will remain on the roster next season.

Jackson represents himself and he has reportedly been steadfast in his desire to land a guaranteed contract, similar to what the Cleveland Browns gave Deshaun Watson last spring. Yet, it seems that Baltimore isn’t ready to agree to such a deal, which is a rarity when it comes to NFL contracts.

With the two sides far apart, there is a distinct possibility the Ravens could look to trade him before next season, and it seems that two NFC South teams are seen as perfect landing spots in a potential Lamar Jackson trade.

On Wednesday, Washington Post NFL insider Jason La Canfora reported on conversations he recently had with executives around the league about the Lamar Jackson situation. As well as what could be the cost of a trade. In those conversations, La Canfora discovered a common choice among league execs as a likely landing spot is a pair of teams in the NFC South.

“The executives I spoke with kept coming back to two NFC South teams as potential Jackson landing spots: the Atlanta Falcons and the Carolina Panthers. Both missed out on Deshaun Watson a year ago — but not without a significant fight. Both have a need at quarterback, both markets could use a jolt, and neither owner is afraid to spend.”

The Atlanta Falcons used a third-round pick in 2022 on Cincinnati star Desmond Ridder, and let him make the team’s final four starts of the season. However, he did not show the sort of signs needed to give the team confidence he could be their long-term answer at the quarterback position. 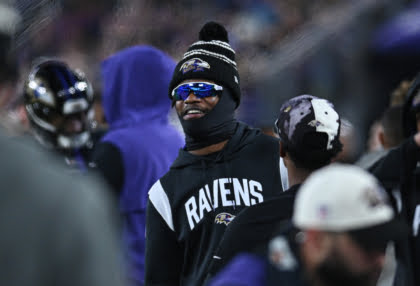 The Carolina Panthers are badly in need of a QB after trades for Sam Darnold and Baker Mayfield over the last two seasons failed miserably.

The belief among the executives La Confora spoke with is that sending Jackson out of the AFC would be preferred by the Ravens, and a coach or general manager feeling the pressure to find an answer at QB now could play a large role in the eventual trade destination.