We have seen some huge NFL Playoff blowouts in the history of football. For those of the older generation, the San Francisco 49ers’ 55-10 win over the Denver Broncos in Super Bowl XXIV is a reminder of this.

More recently, Tom Brady and his former New England Patriots team was on the favorable end of one of the biggest blowouts in postseason history.

With this season’s playoffs now in the conference championship round, we figured it made sense to look at the 10 biggest NFL Playoff blowouts in the history of the game.

This game matched Tom Brady and the favored Patriots against an upstart Indianapolis Colts team led by Andrew Luck. After Indianapolis pulled this one to within 14-7 with a Zurlon Tipton touchdown run in the second quarter, it was all Patriots.

New England would go on to score 28 unanswered second-half points with Brady completely outplaying Luck. The seven-time Super Bowl champion threw three touchdowns compared to one interception while Luck tossed two interceptions. A couple weeks later, and New England would win the Super Bowl over the Seattle Seahawks after a questionable late-game call from Pete Carroll doomed its counterparts.

One week before Dallas was on the receiving end of one of the biggest upsets in NFL Playoff history (The Catch), Tom Landry’s squad took on John McKay’s Buccaners in the divisional round. The ‘Boys found themselves as eight-point home favorites and did not disappoint.

After a surprisingly scoreless first quarter, the backfield combo of Tony Dorsett and Ron Springs got it going big time. These two combined for 214 total yards of offense and a two touchdowns in blowing out Tampa Bay. Meanwhile, the Cowboys’ dominant defense picked off Bucs starting quarterback Doug Williams four times. Interestingly enough, Williams would exact revenge on the NFL a few years later by winning Super Bowl MVP as a member of Washington.

The 1993 San Francisco 49ers were not necessarily the juggernauts we saw earlier in George Seifert’s tenure and during Bill Walsh’s dynastic run. They finished just 10-6 in the regular season. With that said, Dan Reeves’ Giants found out first-hand in this divisional round game what San Francisco could offer up.

San Francisco took a 23-0 lead in the first half thanks to three Ricky Watters touchdown runs. While New York would get on the board with a field goal late in the second quarter, it was all 49ers from there on out. Watters would score two more touchdowns to break the single-game playoff record with five. Giants great Phil Simms completed just 12 passes and was intercepted twice before being replaced by Dave Brown in what was Simms’ final NFL game.

This season’s iteration of the Vikings finished with an 11-5 record while boasting the fifth-best scoring offense in the NFL. Future Hall of Famers Cris Carter and Randy Moss dominated catching passes from Daunte Culpepper, tallying a combined 2,711 yards.

You would not know it with Minnesota taking on a 12-win Giants team that yielded the fifth-fewest points in the NFL. Culpepper was an absolute disaster with 60 net passing yards on 28 attempts, including three interceptions. Carter and Moss caught a combined five passes for 42 yards.

Meanwhile, Giants quarterback Kerry Collins threw a career-high five touchdown passes (two of them going to Ike Hilliard). The good news for Minnesota? It was able to look on a couple weeks later as the Baltimore Ravens and their historic defense disposed of New York in the Super Bowl. It was still another bitter showing in a Vikings playoff history filled with them.

Rememeber the Chad Pennington-led Jets of the early 2000s? Well, you wouldn’t be alone if you don’t. But for one game, Herm Edwards’ squad proved to be on top of the football world. New York boasted an average 9-7 record in 2000, only earning a playoff spot by winning the pedestrian AFC East.

Taking on Peyton Manning and the Colts at home, most figured New York would blow this despite being a six-point favorite. In no way did that come to fruition. New York put up nearly 400 yards o of offense while winning the turnover margin by three. Manning himself threw two interceptions, the last of which resulted in a Jets touchdown and a 41-0 lead and one of the biggest NFL Playoff blowouts in history.

One of the biggest blowouts in the history of the NFL Playoffs went about as expected. Led by Joe Gibbs, Washington finished the regular season with a 14-2 record. It finished No. 1 in the league in scoring at nearly 34 points per game with Joe Theismann, John Riggins and Charlie Brown leading the charge. John Robinson’s Rams were just 9-7 during the regular year and barely inched into the playoffs.

The results were indicative of this. Washington tallied 445 total yards to the Rams’ 204. Overmatched in every way possible, Los Angeles’ quarterback Vince Ferragamo threw three interceptions — the last of which was returned by the great Darrell Green for a 71-yard touchdown.

Still the biggest blowout in Super Bowl history, San Francisco had everything clicking leading up to Super Bowl XXIV in January of 1990. The previous regular season saw this team put up a 14-2 record while leading the NFL in scoring (27.6 PPG) and ranking third in points allowed (15.8). Its two losses came by a combined five points. Meanwhile, the 49ers had outscored their first two playoff opponents by a combined margin of 71-16.

As for the Broncos, John Elway and Co. thought they really did have a chance here. Led by the NFL’s top-scoring defense, the hope was that they could contain Joe Montana and San Francisco’s offense.

About that? San Francisco went up 27-3 at the half with Montana hitting Jerry Rice on two touchdowns. The third quarter started in the same manner, including a 28-yard scoring strike from Montana to Rice. When all was said and done, Joe Cool threw five touchdowns with just seven incomplete passes. Elway? He completed 10-of-26 passes with two interceptions. This was just an embarrassment all the way around.

Yes, the 49ers’ dynastic run of the 1980s did result in one blowout defeat in the NFL Playoffs. It came after the team posted a 10-5-1 regular-season record and with Joe Montana missing eight games to injury.

In this specific playoff game, a vicious hit by Giants defender Jim Burt forced Montana from the field in a play that resulted in a pick-six. He was ultimately replaced by Jeff Kemp, who couldn’t do anything to stop the onslaught New York’s defense had planned for Montana.

In the end, San Francisco put up 184 total yards of offense and nine first downs. The team turned it over four times, too. As for New York, Phil Simms threw four touchdowns while completing just nine passes in the blowout win. The Giants would go on to defeat John Elway and the Broncos to hoist the Lombardi a couple weeks later. 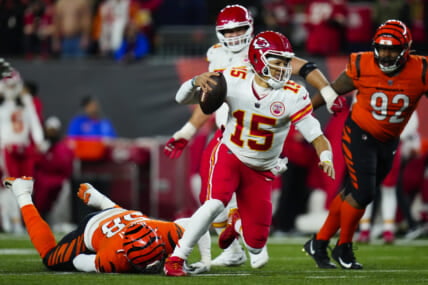 An argument could be made that Buffalo’s streak of four consecutive Super Bowl appearances started in this AFC Championship Game against the Raiders. Sure Marv Levy led his Bills to a win over the Dolphins a week prior, but completely dismantling a Raiders squad that had won 12 regular-season games was no small accomplishment.

More than anything, it was Bruce Smith and Buffalo’s defense that did the damage here. Raiders quarterback Jay Schroeder was intercepted a record five times, two of them by the great Darryl Talley with one being returned for a touchdown. The game was 41-3 at the half, pretty much ending this one before the third quarter even started. Unfortunately, Buffalo would go on to lose the first of four consecutive Super Bowls in a game simply known as “wide right.”

Just a few years after Don Shula’s retirement, Miami thought it had something with Super Bowl-winning head coach Jimmie Johnson. He had led the Fins to three consecutive playoff appearances. They finished 9-7 during the 1999 regular season, but had expectations heading into the playoffs.

In Miami’s way was an upstart Jaguars franchise who was in just its fifth year of existence. Led by Tom Coughlin, this iteration of the Jags finished with a 14-2 record. This one seemed to be destined for a blowout with Jacksonville as eight-point favorites heading in.

From pretty much the get, that’s exactly what we saw in Duval. The Jags took a 24-0 lead after the first quarter and found themselves up 41-7 at the half. They were spearheaded by a defense that forced five turnovers, including two interceptions of Dolphins great Dan Marino. Fred Taylor, James Stewart and Chris Howard also combined for 251 yards on the ground, resulting in Marino being the victim of one of the biggest NFL Playoff blowouts in what ended up being his last game ever. Ouch!