The Tampa Bay Rays’ pitching staff has dealt with an overwhelming amount of injuries since spring training, and Thursday marked the biggest blow of all, as ace Tyler Glasnow went on the 60-day injured list with an elbow injury.

With Glasnow off the hill, manager Kevin Cash is down all three of his starting pitchers from the team’s 2019 American League Division Series matchup with the Houston Astros (Blake Snell was traded, Charlie Morton departed in free agency and Glasnow is hurt).

It’s no secret that the Rays find ways to win games with whoever is on their pitching staff. That said, they’re now without their top gun and could use a midseason addition, especially if Glasnow is questionable to return for the playoffs. Here are three pitchers the Tampa Bay Rays can pursue before the MLB trade deadline. 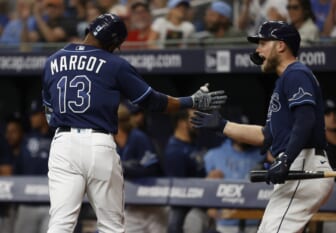 Alex Cobb may not be the efficient starter he was in the earlier stages of his career anymore. But If there’s one team that can turn his career around, it’s the Tampa Bay Rays, who Cobb spent the first six seasons of his MLB career with.

The veteran right-hander heavily relies on his sinker. While he tends to put a few too many runners on base, Cobb is adept at working out of trouble and had his career thrown off course by a pair of unfortunate occurrences. Cobb was a late arrival to spring training with the Baltimore Orioles in 2018 and made just three starts in 2019 due to injury.

Cobb sports a 4.98 ERA across his nine starts with the Los Angeles Angels this season, who are hovering around .500.

Since he’s playing on an expiring contract alongside viable younger Angels hurlers (Shohei Ohtani, Griffin Canning and Andrew Heaney), Cobb could likely be had for a low price. It’s a low-risk, potential high-reward situation for the Rays to dive into.

This would be a move intended to squeeze whatever reliable innings Cobb has left out of him for the sake of getting the ball to the bullpen with a lead in the sixth inning.

Urena has had an up-and-down season for the Detroit Tigers and seen his career derail a bit over the last three years. Once upon a time, Urena was the anchor of the Miami Marlins’ starting rotation. This seems like a reclamation project right up the Rays’ alley.

From 2017-18, Urena recorded a combined 3.90 ERA across 65 appearances, 59 of which were starts with the Marlins. He has started and found success doing so every fifth day in years past. Urena hits the high 90s and induces weak contact with his sinker. He’s still just 29, meaning the Rays could get his career on the right track and reap the benefits in a considerable way.

Urena could begin as an opener or starter in general for the Rays, only going through the order twice. As he gets more acclimated with their catching tandem (Mike Zunino and Francisco Mejia), Cash can let the right-hander pitch deeper into games. If and when Glasnow returns, Urena could move the bullpen, which he has experience pitching out of.

This would be an experimental move that can improve both the Rays’ starting rotation and bullpen. If all goes well, they can re-sign Urena in the offseason.

Jon Gray is one of a handful of Colorado Rockies’ pitchers who could intrigue contending clubs this summer. This may be the perfect trade for the Rays to make.

Gray’s career has been a mixed bag. There have been times he dazzles and looks like the Rockies’ ace. On the other hand, there are moments where it seems he’s losing traction and poised to get removed from the team’s starting rotation.

The positives are enough for the Rays to make a move for Gray. He relies on and finesses his four seamer, has a track record of logging strikeouts at a high rate and has been a sturdy force for the bulk of the 2021 season to date.

Jon Gray has the talent to be great. It may be merely a matter of him getting on the right pitching staff with the right personnel. The Rays have developed several young pitchers into top-of-the-rotation forces (Snell and Glasnow) and gotten plausible seasons from veterans brought in via free agency (Morton and Rich Hill).

Gray would be one of the Rays’ best pure starting pitchers from the jump. If Glasnow returns, he beefs up their rotation and adds more depth to the bullpen. Someone would presumably move to the bullpen or open fewer games.

The Rays have plenty of prospect capital, and the 29-year-old Gray is a free agent after the 2021 season. This is a move that’d help them over the next two months and enhance their World Series aspirations.