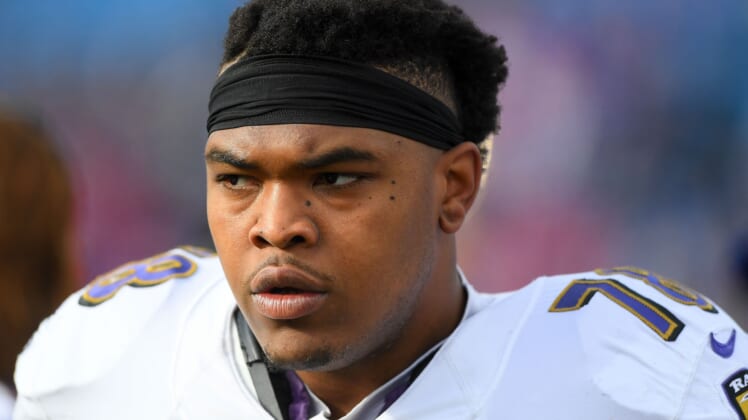 Baltimore Ravens offensive tackle Orlando Brown Jr. is absolutely determined to play left tackle for the prime of his NFL career, and that means he’ll need to be traded to a team that wants him at that position.

Since Baltimore already has committed a lot of money at that spot to Ronnie Stanley, Brown will eventually be on the move, and plenty of teams are already showing interest.

Orlando Brown Jr. is one of NFL’s hottest trade commodities

NFL Network’s Mike Garafolo did a deep-dive report on Brown’s longing to play for a new team as a franchise left tackle, and reported that six teams have already called up Baltimore to figure out how to swing a deal for the two-time Pro Bowler.

Still only 24 years old, Brown is among the most physically gifted and most valuable young offensive linemen in the NFL. He’s entering the final year of his rookie contract, and will soon be due for a massive payday. Garafolo reported that a trade will take place with the understanding that Brown will get a new contract.

Teams who want to acquire Brown must bear in mind he’ll cost a lot more going forward, but if his performance in the pros to date is any indication, he’ll be well worth the top-market money at his position.

To honor his late, great father who played for the Ravens, Brown explained how his dad implored him to play his preferred position, per Garafolo:

“One of the things he always stressed to me as a kid growing up was, ‘Be better than me. Put yourself in a better position. I was an undrafted free agent. Get drafted in the first round, shoot for the stars.’ He always told me, ‘Don’t settle for playing right tackle. Make sure that when it comes time and you get to every level, you’re playing left.'”

Brown’s teammate, Stanley, became the highest-paid o-lineman in the NFL in 2019 when he signed an historic contract extension to be the long-term blindside protector for MVP quarterback Lamar Jackson. That meant Brown would presumably settle into his role on the right side, where he’s thrived across three seasons.

But that’s not what Brown ultimately wants to do, and that means staying in Baltimore isn’t possible. Just about any team that needs a tackle should be blowing up the Ravens’ phones offering either a Day 1 or Day 2 draft pick to get him.

At 6-foot-8 and 345 pounds, Brown is an absolute mauler against the run, and his unique length and constantly improving technique make him almost impossible to get past for opposing edge-rushers.

The tricky thing about doing a trade for Baltimore is that the front office won’t likely want to send Brown to a contender in the AFC. Considering the Kansas City Chiefs just cut both their offensive tackles in Eric Fisher and Mitchell Schwartz, it stands to reason they’d be in the market for someone like Brown.

However, the Ravens aren’t likely to trade Brown to Kansas City, or an up-and-coming AFC team like the Los Angeles Chargers.

Brown will probably have to find a home in the NFC, which leaves only a select number of viable destinations. The Carolina Panthers make sense if they want to get younger and not re-sign Russell Okung.

Rather than pursue a veteran upgrade at quarterback, though, Carolina would need to land a first-round QB in the 2021 NFL Draft and trade its early second-round pick in 2021 to get Brown. That’d give the Panthers a formidable tackle tandem of the future between Brown and Taylor Moton, who’s playing under the franchise tag.

Another couple teams who come to mind as Brown trade candidates are the Dallas Cowboys and Minnesota Vikings.

Dallas has a great left tackle in Tyron Smith, yet he’s coming off neck surgery and isn’t a sure thing going forward to protect newly-extended QB Dak Prescott. Smith could be a one-for-one swap in exchange for Brown.

It’s worth noting that Smith excelled at right tackle at USC and as an NFL rookie, so maybe he’d switch spots again for the chance to play in Baltimore opposite Stanley.

Meanwhile, the Vikings just cut Riley Reiff, and would get a huge upgrade in Brown if they pursue a deal. They’re reportedly one of the six suitors chasing him.