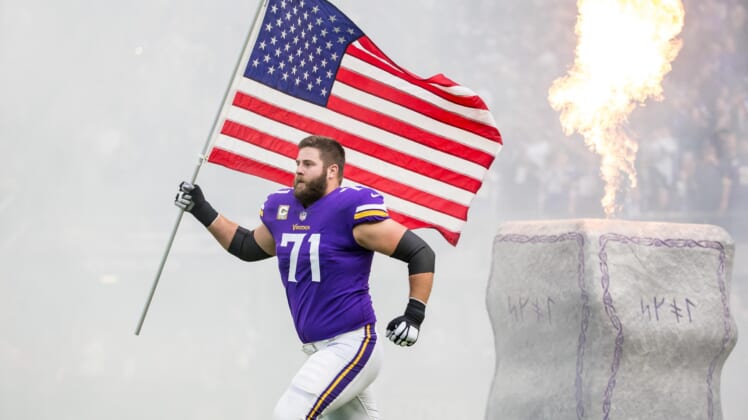 The Minnesota Vikings need to cut some of the fat off their roster leading up to the start of NFL free agency next week. No one really anticipated that to include moving off longtime left tackle Riley Reiff.

Unfortunately, the 2021 NFL salary cap being set at a mere $182.5 million made it a near impossibility for Minnesota to keep Reiff at his cap figure of $17.5 million.

According to ESPN’s Adam Schefter, the Vikings have opted to release Reiff outright. A free-agent signing from the division-rival Detroit Lions back in 2017, Riley Reiff started all 58 games in which he appeared in four seasons with the Minnesota Vikings. He played at a Pro Bowl level during this span.

Prior to this surprising move, the Vikings found themselves $5.36 million over the estimated 2021 NFL salary cap. By releasing Reiff, Minnesota saves a whopping $13.75 million against said cap. It also takes a $3.7 million dead money hit.

The expectation here is that this is just the beginning of what promises to be a hectic next week for general manager Rick Spielman and the Vikings. They still have a lot of work to do in order to create more cap room and become players on the NFL free agent market after a disastrous seven-win 2020 campaign.

Releasing these two longtime defensive starters would save Minnesota another $17-plus million against the cap. Remember, the Vikings just recently moved off longtime veteran tight end Kyle Rudolph. Simply put, they are going to have to make some difficult decisions moving forward.

Releasing Reiff was likely done under the guise that the Vikings will be able to rely on a cheaper and younger Brian O’Neill to move from the right side to Kirk Cousins’ blindside.

Guard Ezra Cleveland could also kick outside to right tackle in this scenario, making the interior of the offensive line a massive need for Minnesota.

Cousins was sacked 39 times in 2020. That was a dramatic increase from the number of times he went down during the Vikings playoff season the previous year. Making the right mix work in front of him is going to be big moving forward.

There’s also a possibility Minnesota opts to use the 14th overall pick in the 2021 NFL Draft on a tackle. Northwestern’s Rashawn Slater is seen as the top available player at that position. Guards such as Trey Smith (Tennessee), Wyatt Davis (Ohio State) and Royce Newman (Mississippi) could also be available on Day 2. Simple put, there’s options here for Minnesota here.

Either way, the Vikings needed to cut some fat off their salary cap heading into free agency. No matter how surprising it might have been, releasing Riley Reiff did just that.