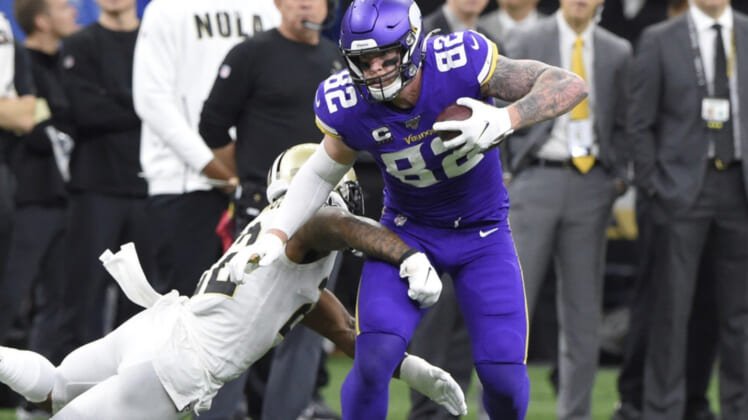 It’s not too often that a non-quarterback suits up with one team for 10 seasons. That has been the case for Kyle Rudolph and the Minnesota Vikings.

A second-round selection of Minnesota back in 2011 from Notre Dame, Rudolph has to be considered one of the greatest tight ends in franchise history. Unfortunately, the two-time Pro Bowler will not be back with the Vikings in 2021.

According to NFL Media’s Ian Rapoport, the Vikings are set to release Rudolph.

Minnesota made the decision official via its official website.

“From the moment we drafted Kyle as a young man out of Notre Dame in 2011, through his 10th season with the Vikings in 2020, he has been one of the premier tight ends in the NFL and most influential and positive leaders I’ve ever been around. Kyle and Jordan have made such an immeasurable impact on our team and community that may never be matched,” general manager Rick Spielman said. “The energy they have invested in the community, most notably through the End Zone at the University of Minnesota Masonic Children’s Hospital, is truly remarkable. I admire Kyle, and we will miss him and his family. We sincerely wish them the best.”

This past season saw the 31-year-old Rudolph record a mere 28 catches for 334 yards and a touchdown. This represented one of his worst statistical outputs in a decade with the Vikings.

It also came with youngster Irv Smith Jr. looking to shine in Minneapolis. A second-round pick back in 2019, Smith Jr. led Vikings tight ends with 30 catches for 365 yards and five touchdowns as a sophomore last season. Teaming up with stud wide receiver Justin Jefferson, the Vikings figure that they have two building blocks moving forward. Simply put, there was no more room on the roster for Kyle Rudolph.

Prior to this move, Minnesota found itself $11.16 million over the estimated 2021 NFL salary cap. Releasing Rudolph saves the team a cool $5.1 million. However, it does come with a $4.35 million dead cap hit.

The Vikings can designate Rudolph a post-June 1 cut, spreading out dead cap hit through 2023. This would pretty much save them $7.94 million in 2021.

The Vikings still have a lot of work to do between now and the start of free agency. They want to be players on the open market in order to upgrade a roster that posted a disappointing 7-9 record in 2020.

There’s a number of avenues for general manager Rick Spielman to pursue following the release of Rudolph. Here’s a look at potential Vikings cap casualties and the cash Minnesota would save against said cap in 2021.

Barr remains a potential trade candidate. However, it stands to reason that Minnesota will find a way to move off both Reiff and Smith — saving a combined $24 million against the cap in 2021.

The Kyle Rudolph release was just the start. Expect a lot more activity from these Vikings in the coming days to inch closer to the 2021 NFL salary cap and potentially be a player in free agency.