NFL team had interest in Baker Mayfield trade, believes he will be cut instead 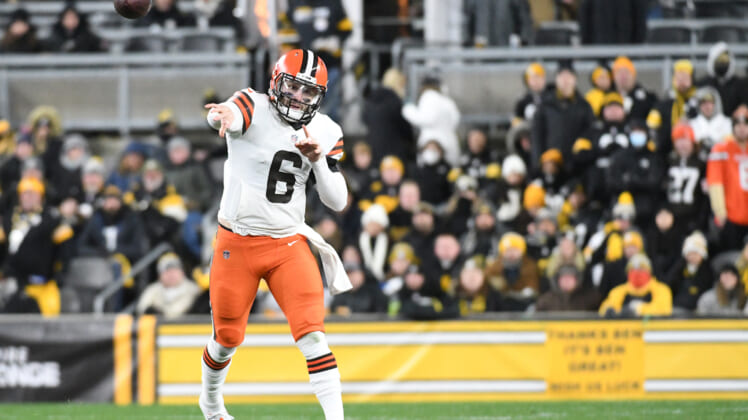 No one really knows what outcome to expect from the Baker Mayfield trade rumors. While it’s strange for the Cleveland Browns to not have traded him since acquiring their new future at the quarterback position with Deshaun Watson, here we are, with Mayfield still on the Browns roster.

Though that’s not expected to be the case once the 2022-23 season kicks off. Mayfield is much more likely to be on another roster, but to this point, few teams have showed interest. In fact, none have been strongly linked to the No. 1 overall pick from 2018.

“No one’s trying to do the Browns any favors”

Yet, Josina Anderson did note one NFL team had interest in a potential Mayfield trade, but they backed off due to the Browns’ asking price. The unnamed source added “No one’s trying to do the Browns any favors in this situation”. Perhaps some teams are still miffed about them giving Watson a fully guaranteed $230 million contract, or maybe they didn’t like something about how the Browns have approached the entire Mayfield trade discussion. Who knows.

Keep in mind, whatever a team gives up in trade compensation is in addition to paying Mayfield’s fully guaranteed salary for the 2022-23 season, the final year of his rookie contract. This amounts to $18.8 million.

Browns have a way out, if they want it

One way around this is for the Browns to “eat” some of this salary in the trade, which could in turn help them receive a better trade offer. Of course, the Browns may not want to pay too much of his salary either, for they want to continue molding what they hope to be a playoff roster after missing out with an 8-9 record the year prior.

As the season nears, something figures to give on this front. Who bluffs first remains to be seen.

Related: Baker Mayfield trade may not happen until June according to NFL insider