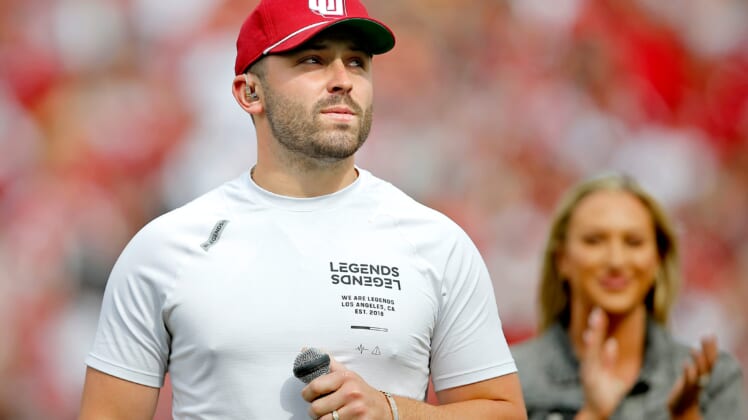 Leading up to the 2022 NFL Draft, the belief was for the Cleveland Browns to find a trade partner for Baker Mayfield once a team realized they missed out on the chance to land a top quarterback prospect. Then, the three-day event came and went, and Mayfield still remained on the Browns’ roster.

Now the few landing spots that appeared to be left for the first pick in the 2018 NFL Draft, have only since dwindled down even more. This is due to nine quarterbacks being selected by teams in the draft.

Instead of his market picking up immediately following the draft, it seems Mayfield’s trade market may be as quiet as ever.

At this point, the Browns may be stuck with Mayfield until June, according to NFL Network’s Ian Rapoport, who recently made an appearance on the Pat McAfee Show.

During his report, Rap mentioned the lack of cap space around the league this late into the offseason, plus the idea that teams want to take a peek at the existing quarterbacks on their depth chart, while noting there’s no real deadline to getting a trade executed.

Baker Mayfield’s contract has held him back all offseason

Had Mayfield not still been on his rookie contract, which is based on a pre-determined draft slot value, a team would have likely already gladly completed a trade for the QB. The issue likely comes from his salary being a full-guaranteed amount where teams simply aren’t comfortable paying him as a starter, when they’re not 100% sure he can be better than who they currently have.

Teams may also have some off-field/locker room questions, rooted in his ability to lead a football team. From Odell Beckham Jr.’s dad calling out the QB, to his poor performance, while seeing OBJ later succeed elsewhere, it appears no one is truly convinced in Mayfield’s ability to become an elite QB in the NFL. Or at least they don’t want the potential headache that could come along with taking on a personality such as Mayfield’s.

It remains to be seen what happens with Mayfield, where he’ll end up playing in 2022. Maybe at this point the Browns are waiting to see if a team becomes desperate to improve under center, which, depending on the severity of a training camp/preseason injury or typical poor performance, could prompt a much better offer than whatever they’ve received so far.

As of now, it seems like Browns have botched the Mayfield trade talks, but we could be eating our words later on this offseason. Plus, there’s still uncertainty looming around a potential Deshaun Watson suspension. Who knows what will happen in Cleveland?