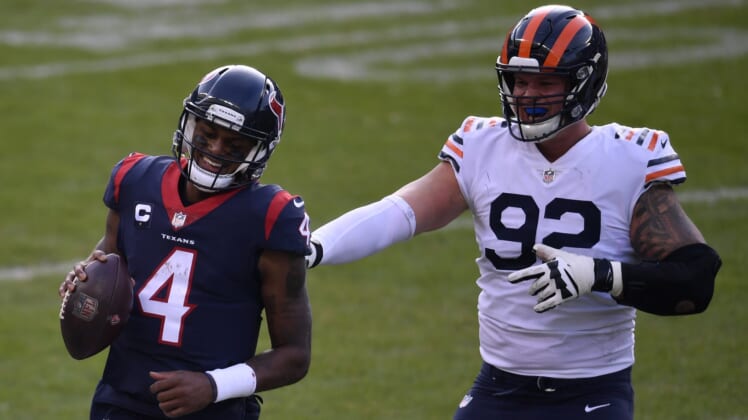 NFL rumors are buzzing about a Deshaun Watson trade with Matthew Stafford now off the market. While the Houston Texans are pushing back against the idea of moving their superstar quarterback, the front office could eventually relent. Once it does, Watson could use his no-trade clause to find the perfect landing spot.

For now, the Texans have the leverage. Watson is under contract through 2025 and the team can fine him if he sits out of training camp. If he is willing to sit out regular-season games, Houston can withhold his salary and make its case to get some of Watson’s signing bonus back.

NFL rumors: Could Deshaun Watson sit out the entire 2021 season?

At a time when the organization wants to reshape its image, including the possibility of moving J.J. Watt to a contender, moving a disgruntled star who is the leader of the locker room might be in the team’s best interest. When the Texans finally relent, though, Watson could use his no-trade clause to orchestrate a move to a preferred destination.

Even before Watson demanded a trade, rumors pointed to the New York Jets and Miami Dolphins as the superstar quarterback’s likeliest landing spots. Not only did both teams have the draft capital to meet Houston’s rumored asking price, but they were also teams many believed the 25-year-old would love to play for in the future.

As part of the massive contract extension he signed before the 2020 season, Watson received a no-trade clause in the agreement. So, if the Texans reach a verbal agreement with another team, their franchise quarterback could decide to block the trade to facilitate a move elsewhere.

Sports Illustrated’s Albert Breer shared Monday that his belief is Watson doesn’t have a single team he specifically wants to play for next season. Instead, he desires to play for a team where he can win at a high level and with a better organizational structure than he has experienced in Houston.

It’s an understandable desire. For years, Watson put up with Bill O’Brien, the head coach and general manager who made baffling in-game decisions in the playoffs and gifted DeAndre Hopkins to the Arizona Cardinals. Things didn’t improve after O’Brien was fired. That’s likely due to executive Jack Easterby, who helped orchestrate the Hopkins trade and has operated with GM-like power despite his only previous NFL experience coming as a team chaplain.

If Watson is willing to take the financial hits by refusing to ever suit up for the Texans again, it will force Houston’s hand. Once the front office starts taking calls, from the likes of the Jets, Dolphins, San Francisco 49ers and Chicago Bears, it’s only a matter of time before a blockbuster move happens.

Some might view the no-trade clause as an obstacle that could prevent a Deshaun Watson trade. However, it’s clear he’ll just be happy to get out of Houston. Whatever team pays the price for him, as long as they are less dysfunctional than the Texans, he will be elated to play for them.