NFL rumors: Could the Cowboys trade for Matthew Stafford?

There's obviously a reason why Stafford's name is popping up surrounding the Cowboys. 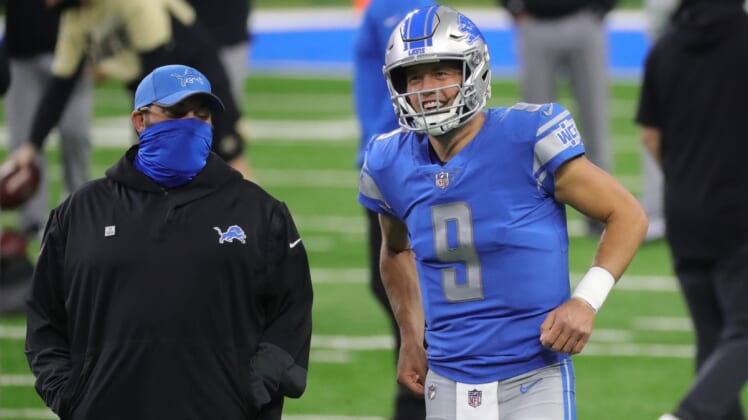 The Dallas Cowboys head into Week 6 with a 2-3 record and in first place in the NFC East. Owner Jerry Jones and Co. must be feeling that the window is wide open for a division title. That’s despite the fact that star quarterback Dak Prescott went down with a season-ending injury this past Sunday against the New York Giants. It’s now led to some rumors heating up regarding the Cowboys and a potential trade for Matthew Stafford.

To be clear. There’s no concrete reports suggesting that the Cowboys and Detroit Lions are even in trade talks right now. For his part, Jones seemed to be more concerned about the devastating ankle injury Prescott suffered following Sunday’s game.

However, as we have learned with Jones, his mind often drifts to blockbuster trade possibilities and bringing in those big-name players. As of right now, Andy Dalton will take over as the Cowboys’ starter for the remainder of the season. If Dallas can somehow find an upgrade over Dalton between now and the Nov. 3 trade deadline, Jones will almost certainly look into it. That’s where Mr. Stafford comes into play.

There’s obviously a reason why Stafford’s name is popping up surrounding the Cowboys. The 32-year-old former No. 1 pick was bandied about in trade scenarios during the offseason. It even led to his wife, Kelly, calling out the Lions’ organization during the spring.

Despite this, nothing came to fruition as it relates to a Stafford trade. In no way does that mean that things have been mended between the longtime Lions quarterback and his organization. What we do know is that the Lions are 1-3 on the season and going nowhere fast under embattled head coach Matt Patricia. In fact, he could very well be the next coach fired after both Bill O’Brien and Dan Quinn were shown the door earlier this season.

The Lions might very well want to start anew with a rebuild. If they can land valuable draft picks from a desperate team such as the Cowboys, it would not be a shock if general manager Bob Quinn kicked the tires on a potential Stafford trade.

With that said, it’s not as simple as comparing Stafford to Dalton. Anyone with an objective mind would suggest that a Stafford trade would act as an upgrade for the Cowboys. There’s this thing called finances. That will play a role.

Stafford is counting $22.65 million against the cap this season. Said cap hit increases to $34.95 million in 2021. Given how freely Jones and Co. have spent money as it relates to extensions for their own players, this would be a huge financial burden for the Cowboys.

That’s until we focus on the unthinkable. It almost seems cold to look at Prescott’s contract situation after the career-altering injury he suffered on Sunday. The young kid is about to embark on a long rehab, one of the toughest things he’s had to deal with in his professional life.

This doesn’t mean the Cowboys can simply ignore the $31.4 million elephant in the room. That’s what they are paying Prescott under the franchise tag in 2020 after the two failed to come to terms on a long-term extension during the offseason. Based on how the quarterback market continues to reset itself, Prescott is looking at well north of $40 million annually on a long-term deal. It’s highly unlikely that his injury changes the dynamics in this regard.

If this is indeed the case, Dallas would be saving money against the cap by replacing Prescott with Stafford in a trade. Again, it sounds cutthroat. But as we already know, the professional sports world is of that ilk.

NFL rumors: How would a Matthew Stafford trade look?

It’s hard to imagine Detroit giving up its franchise signal caller for anything less than a first-round pick and change. In comparison, Stafford’s contract is seemingly a bargain in today’s NFL. He’s still playing at a Pro Bowl level on a poorly coached team. These three things must be taken into account.

This seems to suggest a first-round pick would be the starting-off point in conversations. That would be worth it for Dallas given the finances mentioned above and Jones’ hopes to contend this season. Moving forward, Stafford could act as the Cowboys’ quarterback of the future while eliminating the contract-based drama we saw surrounding Prescott and the Boys in Big D this past offseason.

NFL rumors will start heating up over the next few weeks leading up to the Nov. 3 deadline. Depending on how Dalton plays under center in Dallas, said NFL rumors will include America’s Team. It’s that simple.