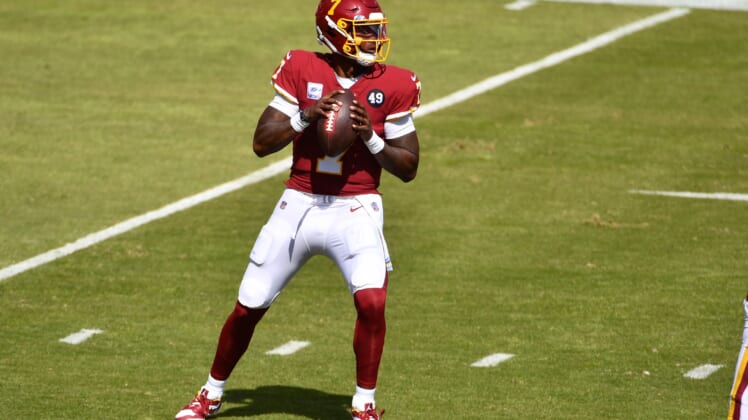 The Washington Football Team’s decision to bench second-year quarterback Dwayne Haskins ahead of its Week 5 game against the Los Angeles Rams was not necessarily a surprise. Rumors leading up to the decision from first-year head coach Ron Rivera indicated that this might end up being the case.

With that said, Haskins is now currently No. 3 on the Washington depth chart. With Kyle Allen starting on Sunday, Alex Smith backed him up. Haskins himself was inactive. From starting quarterback to inactive in the matter of days. It really is a crazy situation in D.C.

We now have some more information on this courtesy of CBS Sports’ Jason La Canfora. It’s rather interesting.

“The situation between the quarterback, who was drafted 15th overall just 16 months ago, and Rivera’s staff is already fairly toxic, and multiple sources within the organization believe a trade by the end of the month is the most likely outcome,” La Canfora reported.

The NFL insider added to these rumors by suggesting that rival NFL teams are already looking into film of the former first-round pick from Ohio State.

Haskins, 23, has struggled big time during his brief career. That includes the former college standout posting a 3-8 record in 11 starts while throwing 11 touchdowns compared to 10 interceptions. A one-year starter with the Buckeyes, most expected these struggles. The lack of skill-position talent and a coaching change in Washington has added to this.

Related: Could Sam Darnold be traded?

It must also be noted that Rivera doesn’t have a built-in relationship with Haskins. The view from Washington’s coaching staff is that owner Daniel Snyder is the one that pushed for the team to select Haskins in the first place back in 2019. If Haskins is moved, here’s a look at his best possible landing spots.

It’s readily apparent that Raiders head coach Jon Gruden is not sold on Derek Carr as the their signal caller of the future. Rumors persisted ahead of the 2020 NFL Draft Scouting Combine that Las Vegas was looking to trade its former Pro Bowl signal caller. Instead, the team added Marcus Mariota in free agency. That suggested a potential quarterback controversy before Mariota himself struggled during training camp.

Gruden fancies himself some strong-arm signal callers. That’s been the case throughout his NFL career. Haskins was just that during his record-breaking one season with Ohio State. If the Raiders can add Haskins in a trade for anything less than a first-round pick, it would make perfect sense. They could then move on from Carr, either via a trade or release this coming offseason, saving roughly $20 million against the cap in the process.

This is all very complicated. In addition to Lions head coach Matt Patricia being on the hot seat, it’s not yet known whether general manager Bob Quinn will be around for the long haul. The two seem to be tied at the hip. As for the Lions, they are stuck between irrelevance and a complete rebuild. Rumors also popped up during the NFL offseason that Matthew Stafford could be traded.

The Stafford rumors make sense in that Detroit is ways away from contention. He’s 32 years old and might want to play for a winning team as the quarterback enters the back years of his prime in the NFL. In Haskins, the Lions would be making a trade for a project that could potentially come in and start next year. Give him a full season and see what the signal caller has. If Haskins proves to be a failure, Detroit will likely be bad enough that it will have a top pick in the 2022 NFL Draft. This rumor makes too much sense.

At 38 years old, it’s not yet known how long Philip Rivers will play for. He’s already taken a head-coaching job in high school football once the borderline future Hall of Famer retires. It’s led to rumors that Rivers will be one and done in Indianapolis. Regardless, general manager Chris Ballard and Co. are going to have to find a quarterback of the future. That man is not Jacoby Brissett.

Indy could definitely afford to a send a second-round pick to Washington for Haskins. If Rivers were to return for the 2021 season, Haskins could learn under one of the most professional quarterbacks of the modern era. This potential trade makes too much sense.

The Patriots have been involved in every single quarterback rumor since Tom Brady shockingly departed in free agency this past March. In the end, Bill Belichick and Co. opted for Cam Newton. While he might have a future in New England beyond the 2020 season, the former NFL MVP is slated to become a free agent. Meanwhile, rumors persist out of New England that the Pats are not happy with young quarterback Jarrett Stidham.

It would not be a surprise if this rumor picked up steam ahead of the Nov. 3 NFL trade deadline. The Pats have in the past bough low on other teams’ castoffs. Haskins would fit that bill in more ways than one. It would also be fun to see Haskins play under respected offensive mind Josh McDaniels and a more stable coaching situation than he’s seen in D.C.