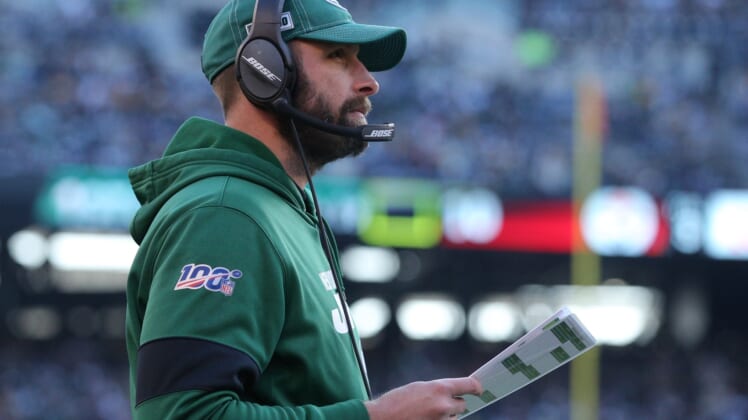 New York Jets head coach Adam Gase was already on the hot seat coming into the 2020 NFL season, with the pressure intensifying heading into Week 4 with an 0-3 record. Set to play the Denver Broncos (0-3) on Thursday Night Football, Gase might be safe even if the Jets lose once again.

Gase, who went 7-9 during his first season in New York, is one of the favorites to be the first NFL head coach fired this season. While it might only be a matter of time until he is terminated, the Jets are reportedly ready to stick with him for the time being.

NFL hot seat: Which coaches are in jeopardy of being fired?

According to NFL Network’s Ian Rapoport, Gase’s job doesn’t hang in the balance heading into Thursday Night Football. While New York’s offense is one of the worst in the NFL through Week 3, the Jets reportedly fear that firing Gase would only make things worse.

Despite the Broncos starting third-string quarterback Brett Rypien, with stars Courtland Sutton and Von Miller also sidelined, Denver is a three-point favorite against the Jets.

NFL odds: Point spreads and lines for every game

New York’s offense will take the field on Thursday averaging the fewest yards (263.7) and points (12.3) per game. Additionally, the Jets rank last in first downs (47), own the second-worst conversion rate on third down (32.4%) and have the third-worst quarterback rating (70.7).

In his second season under Gase, Sam Darnold has not shown the progression anyone hoped for. He is consistently delivering some of the worst quarterback performances on a weekly basis. Heading into Week 4, the former No. 3 overall picks is completing just 61.5% of his attempts with a 3/4 TD/INT ratio and an atrocious 5.9 yards per attempt.

Oddly, per NFL Network, the Jets believe firing Gase would be damaging to Darnold’s development. Given the 23-year-old has only gotten worse under Gase’s direction, it’s hard to see how firing the head coach would make things worse.

Once Gase left Denver, we started seeing signs of his reputation being carried by Manning. Chicago’s offense averaged 20.9 points per game with Gase and ranked 21st in total yards per game (344.6). Despite the warning signs, Miami hired him as its head coach.

After a 10-6 season in 2016, when Miami’s offense ranked 24th in yardage and 17th in points, things went downhill. Ryan Tannehill regressed, later being given away to the Tennessee Titans and winning Comeback Player of the Year away from Gase.

Gase’s Dolphins went 13-19 over the next two seasons, finish with one of the NFL’s worst offenses in his final season. After being fired in 2018, New York hired Gase with the hope he could develop Darnold.

Instead, the Jets have gone in the wrong direction. The team’s No. 3 overall pick in the 2018 NFL Draft isn’t living up to the expectations the front office held for him and the situation is only getting worse. Now, as an underdog at home to another 0-3 team, the Jets are on the verge of being 7-13 under their head coach. Yet, even with some in the organization not trusting him, Gase is likely to remain in New York even longer.