Part eight of nine in a series dedicated to ranking the best players of the past decade highlights those picked in the middle-third of the first round. The bottom-third showcased plenty of talent and production, but picks 20 through 11 is the crème de la crème in terms of this series.

Of the five, it’s not out of the realm of possibility to one day see four of these players inducted into the Hall of Fame. If the lone offensive player listed here produces at a high level for another few seasons, he, too, could join the Canton discussion.

Hopefully you are ready to hear some terrifying statistics, because this list is loaded with defensive dominance. At one point or another, all of the listed defenders have been the best at what they do.

One is the best defensive player in the league, if not the best overall player considering his impact on offense as well as on defense.

These men have 38 years of NFL service with 29 Pro Bowls and 17 All-Pro selections between them. To say they are good at football is akin to saying water is wet, the sky is blue and Snoop Dogg smokes a lot of pot.

Here are the five best players drafted between 11 and 20 over the past decade.

His career got off to a great start in Buffalo. In his first two seasons, Lynch rushed for 2,151 yards and 15 touchdowns while averaging 4.1 yards per carry. But he quickly fell out of favor and, once the Bills drafted C.J. Spiller ninth overall in 2010, Lynch became expendable.

When he was shipped off to the Seattle Seahawks, he was going to a franchise that had won 11 games over the past two seasons. They were 2-2 and on a bye when Lynch arrived. Though they went on to finish 7-9, it was enough to win the then-awful NFC West and host a playoff game.

That’s when things started changing for Lynch and the Seahawks.

He is one of the most difficult backs to tackle in the league, a trait he has put on display hundreds of times throughout his career. The video above was his “I’m here to be the best” moment, and he reminds us all of that almost weekly.

In four full seasons with Seattle, Lynch has carried 1,345 times for 6,141 yards and 56 touchdowns (playoffs included), which all are league highs by a mile. He has made the Pro Bowl each of those four years and earned All-Pro honors in 2012.

He has led the NFL in rushing touchdowns each of the past two years and has 71 in his eight-year career.

Ware is the premier pass-rusher of the past decade—he is the only player drafted over the past 10 years with at least 100 career sacks. At 127 in 10 seasons, he is 14th on the all-time list. If he duplicates his 2014 performance this season, he would move into eighth.

He is tied for fifth all-time with eight different seasons recording at least 10 sacks, and he is the 13th player in league history (since the sack became an officially recorded stat in 1982, anyway) to record at least 100 sacks in his first 10 seasons. He, the other dozen and one more Hall of Famer whose career began in 1981 but whose unofficial 9.5-sack rookie season was counted for list purposes are presented in chart form, ranked by sack total: 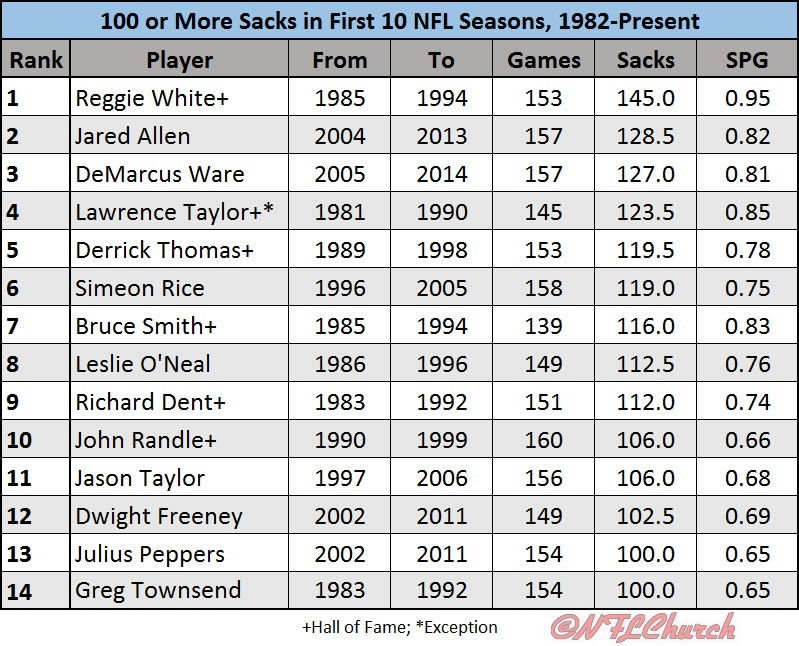 Ware has performed better than a host of fantastic players—including five Hall of Famers. At 33 when the 2015 season gets underway, his best days are behind him. Could he play another five seasons?

If he’s healthy, why not? Using the average of his past three seasons, if Ware were to play five more seasons, he would end his career with 172 sacks, good enough for third all-time.

If that isn’t Hall of Fame-worthy, nothing is. 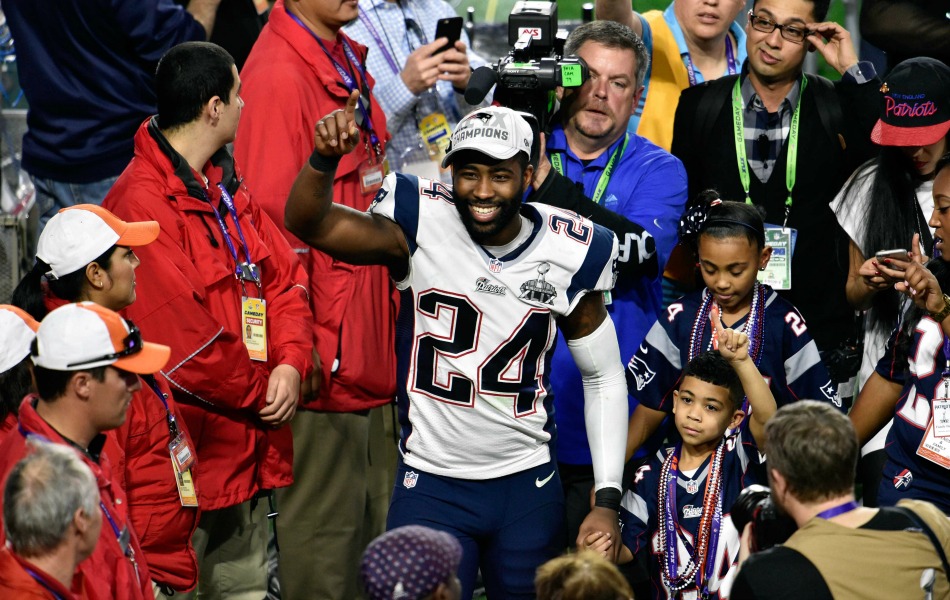 With 23 career interceptions, this six-time Pro Bowler and four-time All-Pro has earned his Revis Island nickname. Including the postseason, he has 26 interceptions, a 48.9 percent completion rate and a 61.0 passer rating allowed. All of those numbers are impressive, but the last two are flat-out ridiculous.

Revis is arguably the best cornerback in the league right now despite all the attention being given to the loudmouthed Richard Sherman. Either are a great place to start to build a stifling pass defense, but Revis Island is a thing because with Revis on one side of the field covering the opponent’s best receiver man to man, there is no need for safety help to his side over the top.

Sherman and Seahawks free safety Earl Thomas—who nearly made this list—are practically roommates on the left side of the defense. Thomas covers from sideline to sideline as Seattle’s single-high safety, but he begins the vast majority of his snaps shaded to Sherman’s side of the field.

Revis will be 30 by the time the 2015 campaign kicks off. In order to be considered for the Hall of Fame, he may need a few more seasons and several more interceptions. The least amount of picks by a full-time defensive back in the Hall is 40, by St. Louis Cardinals cornerback Roger Wehrli (he played from 1969 through 1982 and was inducted in 2007). 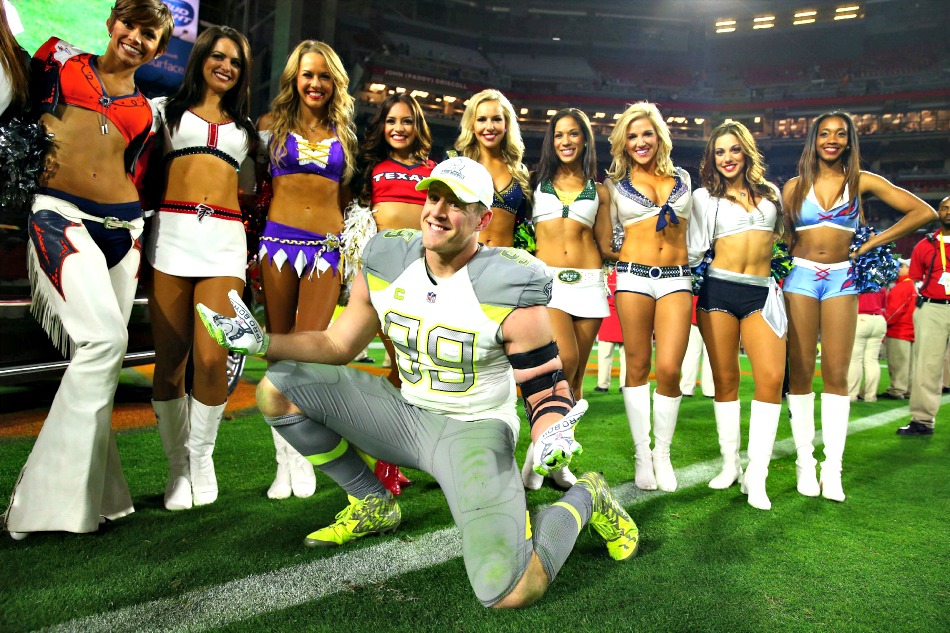 His rookie season was about what you would expect from a small-town kid from the Big Ten who was learning how to be a pro in a big city. His 5.5 sacks were nothing to write home about, but he played a good run defense and ended up as the fifth-ranked 3-4 defensive end in the league, according to Pro Football Focus (subscription required).

In three years since, Watt has 51.5 sacks—tops in the league by nearly 10 (Justin Houston, 43.0). He is one of four players in league history to record at least 50 sacks over a three-year stretch, joining Mark Gastineau, Reggie White (who did it three times) and Michael Strahan.

He is also the only player in history with multiple 20-sack seasons, doing so in 2012 and again last year.

Watt is the best defensive player in the NFL. If anyone thinks otherwise, calmly walk away before you do something you’ll regret.

Is he the best player in the NFL, period? That can be argued given the fact Aaron Rodgers plays football. It’s something that may never be accurately measured considering the difficulty in comparing them.

If we talk impact, there may be no doubt Rodgers is the more impactful player. In terms of statistics, both have done things not many in league history have done. For the sake of brevity and because this is not a comparison piece, we’ll leave it at this:

Watt and Rodgers are to football what Jeanette Lee is to billiards. 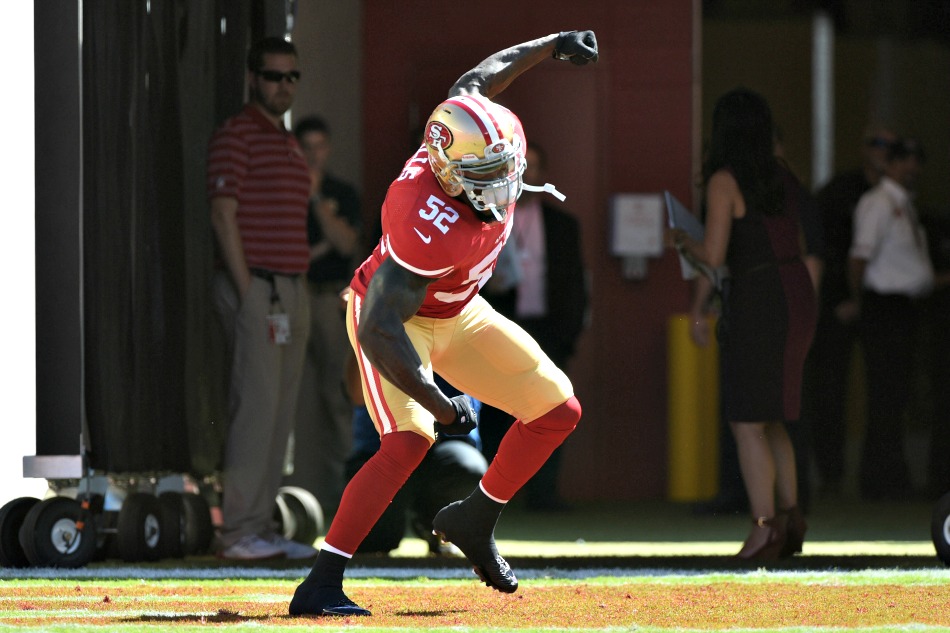 The only season he did not make the Pro Bowl was his last due to missing 10 games with injury. His career is comparable to that of the best inside linebackers in the game’s history—Jack Lambert, Jack Ham, Ray Lewis.

He manned the middle of San Francisco’s defense from Day 1 upon arrival after being drafted out of Ole Miss in 2007. His retirement following the injury-plagued 2014 season marked the end of an era in the Bay Area.

How good was Willis out of the gate? He and Hall of Famer Dick Butkus are the only true inside linebackers in NFL history to be named as a first-team All-Pro in their rookie seasons.

Not even Lewis did that.