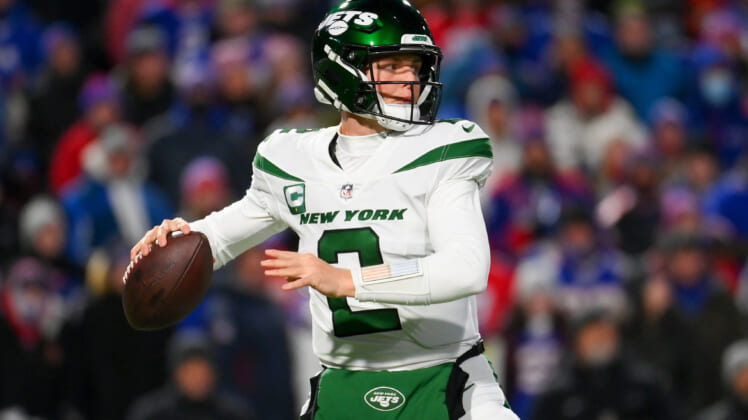 The New York Jets devoted their offseason to building a better team around quarterback Zach Wilson. In a pivotal evaluation year for the young quarterback, things are already off to a rocky start in his second NFL season.

New York made significant investments into its offense this spring. After making splashes in free agency with offensive guard Laken Tomlinson and tight end C.J. Uzomah, the Jets snagged receiver Garrett Wilson with the 10th pick in the 2022 NFL Draft.

Finally, the front office put together the pieces to properly evaluate Wilson this upcoming season. The former No. 2 overall pick would start behind an improved offensive line and have reliable weapons to target, operating in a better offense with weapons to make him a better quarterback.

Unfortunately, things have gotten off to a rocky start this summer. With reporters in attendance at organized team activities, Mike Kaye of Pro Football Network reports that Wilson struggled with his accuracy during OTAs this past week.

It’s not the promising start New York wanted to see from its potential face of the franchise. While it’s early in the offseason, the question becomes if this is a sign of things to come for Wilson.

Should the New York Jets be concerned about Zach Wilson?

The 2021 NFL season couldn’t have gone much worse for Wilson. As a rookie, he went 3-13 as the starter with a 55.6% completion rate and averaged 6.1 yards per attempt. He often operated under constant pressure, forcing him into bad decisions and limiting his chances to make plays.

Accuracy proved to be one of his biggest issues. Wilson led the NFL in the rate of bad throws (23.8%), significantly higher than Justin Fields (21.9%) and Baker Mayfield (20.9%). To make matters worse, he was the only starting quarterback in the NFL with an on-target rate below 70 percent (69.9%).

Troubles with ball placement clearly aren’t something new for Wilson and it’s an area where he needs to improve significantly. However, Kaye also notes that the 22-year-old quarterback improved as OTAs unfolded.

For now, the accuracy issues can be partially explained away by the young quarterback being ramped up in his first practices and trying to do too much as he develops timing in a new-look offense. He improved as the week went on and that’s a positive sign.

The Jets certainly don’t need to panic right now, going out so sign Colin Kaepernick. Wilson deserves to be the unquestioned starting quarterback in New York. If he struggles again in 2022 and doesn’t show the necessary improvement, general manager Joe Douglas shouldn’t hesitate to spend his top pick in the 2023 NFL Draft on C.J. Stroud or Bryce Young.