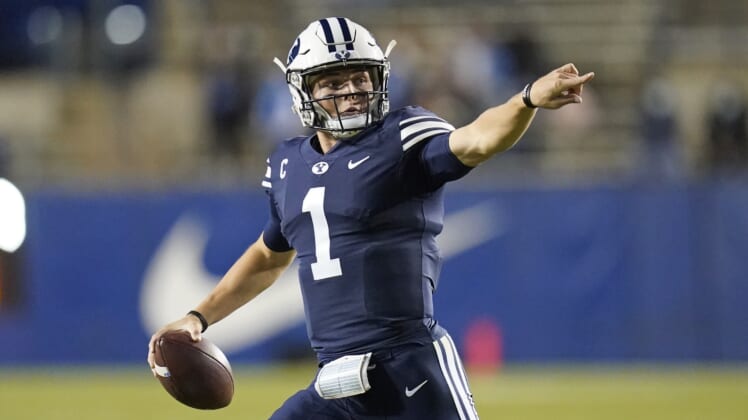 The New York Jets selected BYU quarterback Zach Wilson with the No. 2 pick in the 2021 NFL Draft, finding their franchise quarterback to replace Sam Darnold.

Before the 2020 season, Wilson was widely viewed as a Day 2 pick. He underwent shoulder surgery following his freshman season in 2019 to repair his labrum. He also suffered a wrist injury, which required surgery, in October 2019. But once he got healthy, he broke out in a COVID-shortened season at BYU.

Wilson, the No.4-ranked player on our 2021 NFL Draft board, is lauded for his arm strength and the ability to make Patrick Mahomes-like throws when on the move. Scouts have made some comparisons to Aaron Rodgers, mainly tied to his ability to improvise and a gunslinger mentality.

New York’s offensive coordinator Mike LaFleur will tailor his scheme around Wilson, implementing designs to roll him out of the pocket and finding ways to take advantage of his athleticism and pure arm strength. He will join an offense that boasts promising second-year receiver Denzel Mims and free-agent signing Corey Davis.

Wilson is the third quarterback drafted by the Jets with a top-10 pick since the 2009 NFL Draft, joining Darnold (No. 3 in 2018 NFL Draft) and Mark Sanchez (2009 NFL Draft). He is also the highest-drafted BYU player since Steve Young, who was taken No. 1 overall by the Tampa Bay Buccaneers in the 1984 NFL Draft.

The New York Jets have 10 picks in the 2021 NFL Draft. They are set to make their second first-round pick (No. 23 overall), acquired from the Seattle Seahawks in the Jamal Adams trade.