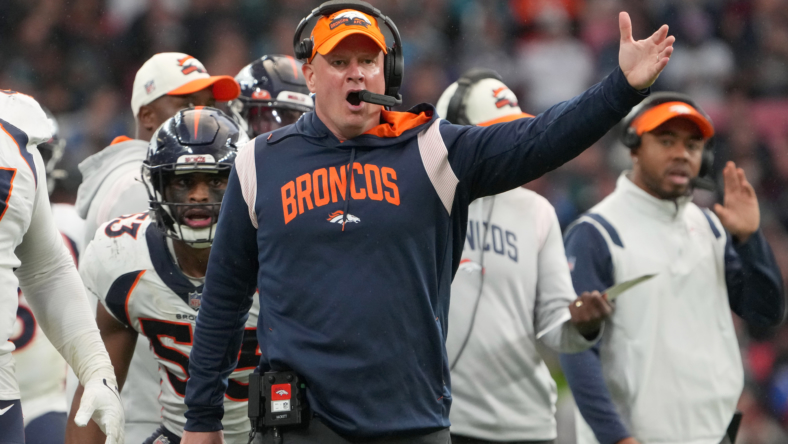 About that? The Broncos scored all of 16 points in an overtime home loss to a lowly Raiders team. They were up 10-0 with nine minutes to go in the second quarter, only to score a total of six points in the game’s final 39 minutes or so. It led to a Davante Adams walk-off touchdown in overtime and a 3-7 start to the season for Hackett’s Broncos.

Even leading up to this game, there was some thought given to the idea that Hackett could very well end up being one-and-done in Mile High. Nothing we’ve seen from Denver Sunday (or through the first 10 games) of his tenure has proven this narrative wrong.

In talking about this possibility, Peter King of NBC Sports noted that it’s a strong likelihood Hackett will receive his walking papers at the end of the season.

There’s a lot of moving parts here outside of Hackett’s struggles coaching. But let’s focus on that perspective for a second.

Known for his ability on offense dating back to his days with the Green Bay Packers, Hackett is now “leading” a unit that ranks dead last in the NFL in scoring at 14.7 points per game. The Broncos have scored north of 20 points just twice this season. They have put up 11 points or fewer four times.

The willingness of Hackett to give up play-calling duties after just nine games in his role as the Broncos’ head coach must be seen as concerning. It was just a few months ago that Hackett hired senior assistant Jerry Rosburg to help with game-management operations after the head coach struggled with in-game decision making.

He’s now called on an assistant to take over play-calling duties. On the surface, this is an indictment of Hackett’s ability to be a head coach. Delving further into it, Sunday’s offensive performance with Kubiak calling the shots could be the death knell for Hackett in Denver.

Denver Broncos ownership group has no relationship with Nathaniel Hackett

Denver’s new ownership group, led by Rob Walton and Greg Penner, is pretty much like us. They were on the outside looking in before recently taking over their roles. They have no built-in relationship with Hackett.

Instead, this group looks at a 3-7 team led by a $47 million per-year signal caller in Russell Wilson and a first-year man in Hackett that seems to be in over his head. Denver’s first-round pick in the 2023 NFL Draft is headed to the Seattle Seahawks via the blockbuster trade for Wilson. There’s no quick fix here. There’s no magic wand to scrub the Wilson trade from the books. This could very well lead to Hackett getting his walking papers after just one year as the Broncos’ head coach.

Look at it this way. Walton and Penner paid a record amount for the franchise. They want a contending team in Mile High. But without other avenues to make an imprint, it seems to make sense that Hackett would be the proverbial fall guy.

Perhaps, we’re using fall guy too loosely here. Remember, it was ahead of Sunday’s game that Nathaniel Hackett provided the saddest quote of the season in telling reporters that someone has to win the game between two bottom feeders in the AFC West.

Now that it’s not Hackett’s team, his standing in Denver is on shaky ground. It’s that simple.