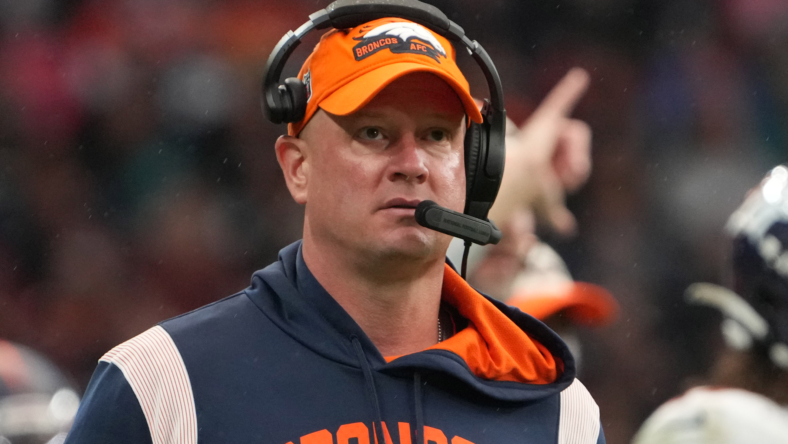 In his first season as the Denver Broncos head coach, Nathaniel Hackett has his team at 3-6 through nine games. It’s led to some speculation that he’s in over his head and could be one-and-done in Mile High.

Remaining in the AFC West, Denver is slated to take on an equally bad Las Vegas Raiders in a rivalry game this coming Sunday. Vegas finds itself at 2-7 on the season and mired in a ton of controversy surrounding fellow first-year head coach Josh McDaniels.

Neither team is going to make the playoffs this season. They’re both simply playing out the string in what promises to be lost campaigns on both parts. In turn, this isn’t necessarily one of the better games on the NFL Week 11 slate.

With that said, Hackett proved to be quote-worthy in speaking with the media on Wednesday. What he had to say might be the saddest thing we’ve heard around the gridiron world in some time.

“Somebody’s got to win this game,” Nathaniel Hackett on upcoming game against the Raiders.

Actually, that’s not factual. We’ve already had a tie game between the Indianapolis Colts and Houston Texans this season. No one has to win the game. Even then, this doesn’t inspire too much confidence in the Broncos.

Related: Nathaniel Hackett and NFL coaches on the hot seat

For many, this quote reads like a defeatist attitude. How can you read it any other way? Hackett didn’t stop there. When asked what the identity of the Broncos’ offense was, he simply said “It’s not a good one.” Dude, really?

Fresh off acquiring Russell Wilson in a blockbuster trade with the Seattle Seahawks, Denver enters Week 11 dead last in the NFL in scoring at 14.6 points per game. It has been a huge dumpster fire in Hackett’s first season with the team.

Given that he’s known for his abilities to call things on offense, that’s a dark cloud hanging over the first-year head coach. In fact, it’s looking like the former Green Bay Packers offensive coordinator was more a product of Aaron Rodgers in Wisconsin than anything else.

While that might seem harsh, Denver exhausted a ton of cash and draft capital to build up a contending team this past offseason. The reward has been one of the worst-coached teams in the NFL with Hackett looking the part of a clown as it relates to in-game coaching decisions. That’s now apparently extended to his give and take with the media.