Tennessee Titans head coach Mike Vrabel had made it clear leading up to the 2022 NFL Draft that star wide receiver A.J. Brown would not be traded.

Brown, a second-round pick out of Mississippi back in 2019, had been involved in a contract dispute with the Titans. It led to a shocking trade to the Philadephia Eagles in exchange for a first-round pick and third-round pick in the 2022 NFL Draft.

As cameras made their way to the Titans’ war room once the trade was completed, Mike Vrabel could be seen stepping away from the table next to general manager Jon Robinson — displaying a ton of frustration in the process. It was a sight to be behold.

It was just last week that Vrabel indicated Brown wouldn’t not be taded as “long as I’m the head coach.”

By looking at that video, it seems clear that Vrabel was not part of the decision-making process. With the 18th selection, Tennessee picked up fellow wide receiver Treylon Burks of the Arkansas Razorbacks.

It’s one thing to like Burks as a prospect. It’s another thing to support selecting him with one of the picks acquired for Brown. 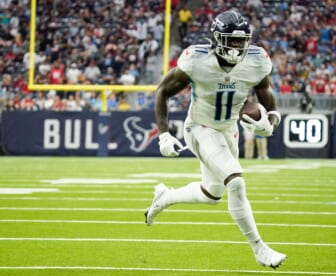 It’s easy to see why Vrabel would be a bit upsdet. Tennessee’s leading returning wide receiver from a season ago, Nick Westbrook-Ikhine, recorded 38 catches for 476 yards. The team also released veteran Julio Jones earlier in the offseason about a calendar year after acquiring him from the Atlanta Falcons.

As for A.J. Brown, he’s been the Titans’ top pass-catcher since the team made him the 51st pick in the 2019 NFL Draft.

Vrabel and the Titans finished up last season with a 12-5 record and as the AFC South division winners, only to lose to the Cincinnati Bengals in the divisional round.

In four seasons as the Titans’ head coach, Mike Vrabel has posted a 41-24 record with three playoff appearances. He’s feeling the pressure due to a lack of postseason success. Tennessee trading Brown isn’t going to do much to change this.

With that said, there was a point being made by the Titans’ front office. Brown ended up signing a four-year, $100 million extension with the Philadelphia Eagles. Rather than paying him the big bucks, Tennessee opted to acquire draft pick assets.

It’s the same thing we’ve seen from the Green Bay Packers (Davante Adams), Kansas City Chiefs (Tyreek Hill) and Baltimore Ravens (Marquise Brown) when they dealt star receivers rather than back up the Brinks truck.