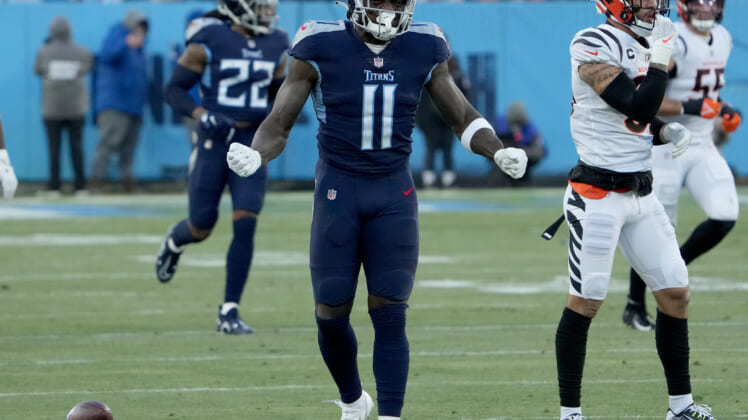 The recent trend of star NFL wide receivers being traded then signing huge contracts sparked rumors that A.J. Brown could be the next NFL star traded. Amid the speculation, Tennessee Titans general manager Jon Robinson pushed back on the notion.

Brown, the 51st pick in the 2019 NFL Draft, quickly emerged as one of the best players at his position. Entering his age-25 season, the 6-foot-1 receiver earned Pro Bowl honors in 2020 and is responsible for 25 touchdowns in his first 43 games played.

Brown is entering the final year of his contract, entering the 2022 season with a $4.518 million cap hit. Far behind his peers among the highest paid receivers in the NFL, Tennessee’s star could cash is deserving of a massive contract extension.

However, the recent Davante Adams and Tyreek Hill trades led to speculation that Brown and Deebo Samuel could be dealt rather than extended by their current teams. Brown’s tweets added more fuel to the fire, with fans speculating that a trade might be possible.

Speaking to team reporter Jim Wyatt, Titans’ general manager Jon Robinson made it clear the franchise still values Brown and wants him to. be a part of its core for years to come.

“A.J. is an important part of what we do. He’s a great teammate, he works hard, he’s about what we’re about. A.J. is a Titan and we want to keep A.J. a Titan. And that’s part of our goal this offseason, or whenever that manifests itself, to come to an agreement to keep him around.”

Navigating an extension will be a bit challenging. According to OvertheCap.com, Tennessee is projected to have just $10.5 million in cap space next offseason. Given the franchise tag would exceed $17 million fully guaranteed, it would either force the Titans to have cap casualties (Taylor Lewan, Bud Dupree) or to sign Brown to an extension outright.

It would be a surprise if Brown isn’t playing for the Titans in 2023. Of course, the blockbuster Adams and Hill deals came as a shock to the NFL world. If Brown is moved, given his age and high ceiling, any team acquiring him will have to trade at least a first- and second-round pick for Tennessee to pick up the phone.