Miami posted an 8-3 record to open the campaign and seemed destined to compete for a conference title with one of the most-potent offenses in the NFL. Since then, the Dolphins have lost five consecutive games.

The backdrop here includes three different concussions starting quarterback Tua Tagovailoa has suffered and the Dolphins’ handling of it. Miami now heads into Week 18 needing a win over the New York Jets and help in order to qualify for the playoffs.

According to Dolphins insider Armando Salguero of Outkick, McDaniel’s job could be on the line. In fact, the report indicates “everybody’s job is at risk” if Miami loses to the Jets and finishes the season with an 8-9 record. That includes general manager Chris Grier.

Miami will either be rolling with rookie Skylar Thompson or veteran Teddy Bridgewater against New York come Sunday. Bridgewater suffered a dislocated pinky in his throwing hand during last week’s loss to the New England Patriots and is questionable for Sunday’s game. Tagovailoa has not been cleared to practice.

If Miami were to beat the Jets while watching the Buffalo Bills defeat the New England Patriots, it would earn the seventh seed in the AFC — possibly saving McDaniel’s job in the process.

Firing Mike McDaniel would be a typical Miami Dolphins move

Outside of Washington Commanders’ Daniel Snyder, Stephen Ross is the most-embattled owner in the NFL. Ross cost the Dolphins their first-round pick in the 2023 NFL Draft for tampering with Tom Brady and Sean Payton.

He’s also a named defendant in the civil suit by former Dolphins head coach Brian Flores, claiming racial discrimination in the hiring process of NFL head coaches and front office personnel. Miami fired Flores following the 2021 campaign after he led them to a 24-25 record in three seasons. That included just the franchise’s third double-digit win performance since 2001.

It would seem that McDaniel deserves more than just one season to prove that his innovative offensive mind can turn things around in Miami. In fact, he’s already done that 16 games into his first season with the long-downtrodden franchise.

The Dolphins’ pace of 24.1 points per game would be their second-highest mark since Don Shula and Dan Marino were leading things for the franchise all the way back in 1995. 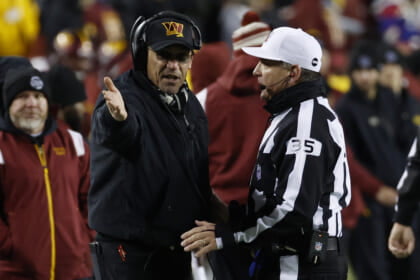 In games that Tagovailoa has started, the Dolphins are averaging 26.3 points per game. Tyreek Hill was on pace to break the single-season yardage mark for a wide receiver prior to injuries popping up. Jaylen Waddle joined Hill to form what is considered the best wide receiver tandem in the league as the sophomore started to dominate.

If McDaniel is fired after the ugly six-game stretch, he would likely become the most-coveted head coach of the hiring cycle outside of Michigan’s Jim Harbaugh.