Tyler Herro has become one of the Miami Heat's household names over the last year. However, could his best role be one of the best bench players in basketball? 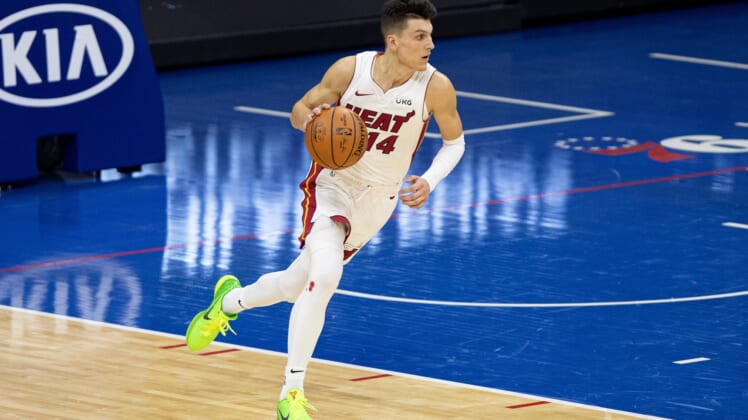 The Miami Heat used their 15th different starting lineup in 22 games this season on Friday. The biggest difference from their past game, compared to the other 14 lineups, was the absence of second-year guard Tyler Herro.

The 21-year-old started every prior game this season, outside of the third Wizards’ game. Ever since Goran Dragic went down with an injury in the 2020 NBA Finals, Herro has been Miami’s point guard despite it not being his natural role.

Herro had 17 points, four rebounds, four assists, one steal and two blocks in 29 minutes of action against the Wizards. He looked more natural on offense, most likely due to the fact that the majority of his focus was making his shot fall. Herro has played well this season as a starter, which made the move fascinating.

However, Herro may be the perfect sixth man for the 2021 season and possibly beyond this point.

Tyler Herro stats as a starter

Tyler Herro started eight games in the 2019-2020 regular season as a rookie. In those games, he averaged 14.4 points, 5.0 rebounds, 2.6 assists and shot 40.4% from the field. He also shot 26.1% from the three-point line on 5.8 attempts per game. These numbers aren’t terrible, but the shooting percentage is not impressive. Perhaps, his rookie season was the reason behind this, but even when the Heat made their way to the NBA “Bubble,” Herro took another step down as a starter.

Herro averaged 14.8 points, 4.2 rebounds, and 3.0 assists while shooting a low 37.7% from the floor. While his three-point percentage increased to 40.9%, his shooting percentage took a 2.7% dip. He started five games, which all came in the NBA Finals, so it may not be fair to judge a rookie off these statistics.

Fast forward to this season and Herro has definitely improved his game. Herro is averaging 17.2 points, 6.1 rebounds, and 3.9 assists while shooting 45.3% from the field. However, he’s shooting 32.5% which is down from his 40.9% during the NBA Finals.

They are good stats from the 21-year-old guard, but there are numerous liabilities when it comes to starting Herro, such as defense alongside Duncan Robinson. This leads up to what Herro has accomplished in his short career on the bench.

Herro spent the majority of his rookie season coming off of the bench. He averaged 13.4 points, 3.9 rebounds, and 2.1 assists with a 43.3% field goal percentage. He also shot 41.3% from the three-point line on 5.4 attempts per game. Herro accomplished these statistics in 6.5 fewer minutes per game, compared to when he was a starter. The most notable difference between his starter and bench minutes from last season was his three-point percentage. He shot 15.2% higher coming off of the bench on relatively the same amount of attempts.

The 2020 NBA Playoffs also proved that Herro’s minutes off the bench were better than his time on the floor as a starter. He averaged 16.3 points, 5.4 rebounds and 3.9 assists in 33.1 minutes per game. He also shot way better at 45.2% from the floor. When he was a starter, he played 35.5 minutes per game and still didn’t put up those types of numbers.

Even though it is a small sample size, Herro replicated his performance from the bench last year in Friday night’s game when he scored 17 points. Head coach Erik Spoelstra may keep Herro in his role coming off a dominating victory against the Wizards.

Why Tyler Herro is best served as sixth man

Tyler Herro has exceeded expectations in his short tenure with the Heat, evolving from a potential role player to an emerging star in the NBA. However, it’s clear that the 21-year-old’s best basketball happens when he is coming off of the bench.

Herro doesn’t need to be the facilitator for others, which is required when he’s starting. There’s more focus on his individual game and his shooting splits definitely show that. During the two periods of time when Herro came off the bench, he averaged 43.3% and 45.2%.

Tyler Herro played the best basketball of his young career in the 2020 NBA Playoffs when everyone started to truly understand what he was becoming. He made the jump to full-time starter this season and has been good, but it’s clear his shooting is significantly being hampered due to his responsibilities.

The best possible role for Herro right now is to have him become the Heat’s sixth man on a nightly basis. Kendrick Nunn has earned the right to be in the rotation and should be the starter due to Goran Dragic’s workload and injuries. Herro can start, but he looks more smooth as the sixth man for them.

Maybe, this could be the start of a Lou Williams type of career for Herro. He could be like Williams and always be in the running for the NBA Sixth Man of the Year Award. This could also be a slight detour in a career that could launch off into a perennial All-Star player every single season.

Whatever head coach Erik Spoelstra does with Herro moving forward will be done with the thoughts of returning to the NBA Finals and winning a championship. Herro may not be ready to be a starter on that type of team yet, but he can certainly be the best bench player on that team.